A cruise can be the perfect summer holiday. But cruise ships, with hundreds, even thousands of people in close quarters, can also be a hotbed of germs.

In particular, cruises are somewhat notorious for outbreaks of gastro. One study, which looked at close to 2,000 cruises docking in Sydney, found 5% of ships reported they’d had a gastro outbreak on board.

If you’re about to head off on a cruise, there’s no need to panic. There are some precautions you can take to give yourself the best chance of a happy, gastro-free holiday.

Viruses are the leading cause of acute gastroenteritis in Australia. Norovirus is the main culprit, causing an estimated 2.2 million cases of gastro each year.

Norovirus is usually transmitted from person-to-person via the faecal-oral route, where virus particles found in the stool of one person end up being swallowed by another person.

Read more: Health Check: how long are you contagious with gastro?

Norovirus is hardy and can resist acid conditions (like those in the gut) and moderate temperatures (at which we wash clothes or reheat food, for example). Further, many chemicals used in cleaning products and hand sanitisers don’t effectively remove norovirus.

The main symptoms of gastro caused by norovirus are diarrhoea and vomiting. Symptoms normally only last for a short period (two to three days), and will stop on their own. The main risk is dehydration, which is of most concern for young children and the elderly. 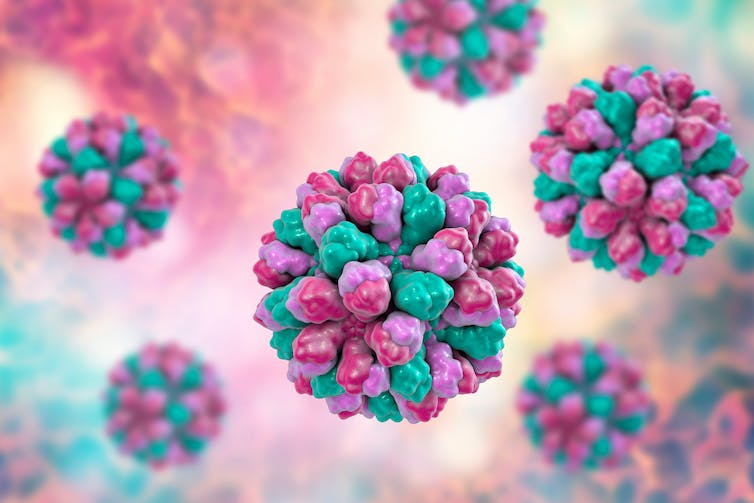 Norovirus is the number one viral cause of gastro in Australia. From shutterstock.com

Generally, a cruise ship will declare a “gastro outbreak” once 2-3% of passengers or crew are ill with gastro symptoms. So on a ship of 2,000 passengers, 40-60 people would need to be unwell before an outbreak is declared.

An Australian study found 5% of cruise ships that arrived in Sydney between 2007 and 2016 reported gastro outbreaks (98 out of 1967). Of the outbreaks with a known cause, 93% were from norovirus.

Reports pop up in the news from time to time when there’s a significant outbreak, like when the Sea Princess recorded 200 cases of gastro caused by norovirus in 2018.

Read more: Viruses aren't all nasty – some can actually protect our health

You can be infectious with norovirus before symptoms appear and even after they resolve, so a person might unknowingly bring norovirus onto a cruise with them.

On a cruise ship, norovirus is mainly spread directly from person to person. This is not surprising as many activities on a cruise involve mixing with other passengers in a reasonably closed space.

While a handshake is a normal greeting, it’s a fairly unsanitary practice. A recent study suggested a “fist-bump” should be promoted on cruises, while a modified version dubbed the “cruise-tap” (where only two knuckles are touched) could be even better. 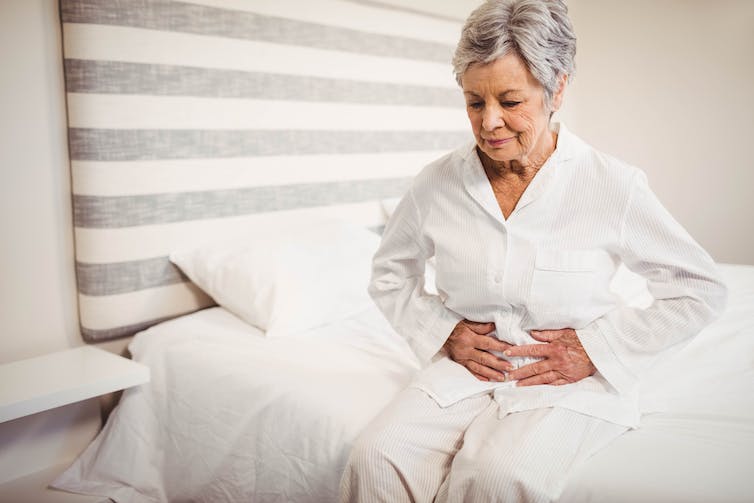 If you do catch gastro on a cruise, you’ll probably be asked to stay in your room so as not to give it to other passengers. From shutterstock.com

The other way norovirus typically spreads is from touching contaminated surfaces. A person with norovirus may not wash their hands properly (or at all) after going to the toilet, leaving many invisible norovirus particles on their hands.

When this person touches surfaces (for example hand rails, buttons in the lift, or utensils at the buffet) they leave behind norovirus particles. Other people can then touch these surfaces and transfer the particles to their own hands. Then, if they put their hands to their mouth, they can give themselves the virus.

It’s rare to inhale norovirus particles from the air, but it can occur, usually if someone with the virus vomits nearby.

While norovirus can be found in food, cruise ships have strict food handling practices to prevent the spread of illnesses such as norovirus. Though this doesn’t mean it’s unheard of.

How to avoid catching norovirus

It’s impossible to completely eliminate the risk of catching norovirus, but there are some things you can do to minimise your risk:

If you do get gastro symptoms on a cruise, it’s important you tell the medical personnel as soon as possible and follow their instructions.

You may be asked to stay in your cabin for a short period so as not to infect other passengers; just as you would wish another infected passenger not to spread the virus to you and your family.

The sooner the crew can identify a gastro case, the sooner they can start extra clean-up procedures and take further precautions to prevent an outbreak. Also, if you tell medical personnel, they may be able to provide medication and organise appropriate food to be delivered to your room.

Above all, to minimise the risk of gastro spoiling your cruise, wash your hands thoroughly and often.