In the first week of 2020, hashtag #ArsonEmergency became the focal point of a new online narrative surrounding the bushfire crisis.

The message: the cause is arson, not climate change.

Police and bushfire services (and some journalists) have contradicted this claim.

We studied about 300 Twitter accounts driving the #ArsonEmergency hashtag to identify inauthentic behaviour. We found many accounts using #ArsonEmergency were behaving “suspiciously”, compared to those using #AustraliaFire and #BushfireAustralia.

Accounts peddling #ArsonEmergency carried out activity similar to what we’ve witnessed in past disinformation campaigns, such as the coordinated behaviour of Russian trolls during the 2016 US presidential election.

The most effective disinformation campaigns use bot and troll accounts to infiltrate genuine political discussion, and shift it towards a different “master narrative”.

Bots and trolls have been a thorn in the side of fruitful political debate since Twitter’s early days. They mimic genuine opinions, akin to what a concerned citizen might display, with a goal of persuading others and gaining attention.

Bots are usually automated (acting without constant human oversight) and perform simple functions, such as retweeting or repeatedly pushing one type of content.

Troll accounts are controlled by humans. They try to stir controversy, hinder healthy debate and simulate fake grassroots movements. They aim to persuade, deceive and cause conflict.

We’ve observed both troll and bot accounts spouting disinformation regarding the bushfires on Twitter. We were able to distinguish these accounts as being inauthentic for two reasons.

There are various definitions for the word “bot” or “troll”. Bot Sentinel says:

Propaganda bots are pieces of code that utilize Twitter API to automatically follow, tweet, or retweet other accounts bolstering a political agenda. Propaganda bots are designed to be polarizing and often promote content intended to be deceptive… Trollbot is a classification we created to describe human controlled accounts who exhibit troll-like behavior.

Some of these accounts frequently retweet known propaganda and fake news accounts, and they engage in repetitive bot-like activity. Other trollbot accounts target and harass specific Twitter accounts as part of a coordinated harassment campaign. Ideology, political affiliation, religious beliefs, and geographic location are not factors when determining the classification of a Twitter account.

These machine learning tools compared the behaviour of known bots and trolls with the accounts tweeting the hashtags #ArsonEmergency, #AustraliaFire, and #BushfireAustralia. From this, they provided a “score” for each account suggesting how likely it was to be a bot or troll account.

We also manually analysed the Twitter activity of suspicious accounts and the characteristics of their profiles, to validate the origins of #ArsonEmergency, as well as the potential motivations of the accounts spreading the hashtag.

This graph shows how many times #ArsonEmergency was tweeted between December 31 last year and January 8 this year: 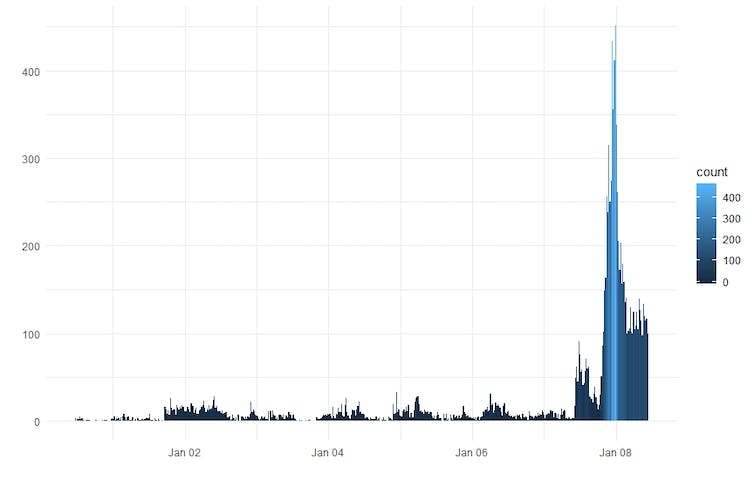 On the vertical axis is the number of tweets over time which featured #ArsonEmergency. On January 7, there were 4726 tweets. Author provided

Previous bot and troll campaigns have been thought to be the work of foreign interference, such as Russian trolls, or PR firms hired to distract and manipulate voters.

In late November, some Twitter accounts began using #ArsonEmergency to counter evidence that climate change is linked to the severity of the bushfire crisis.

Below is one of the earliest examples of an attempt to replace #ClimateEmergency with #ArsonEmergency. The accounts tried to get #ArsonEmergency trending to drown out dialogue acknowledging the link between climate change and bushfires. 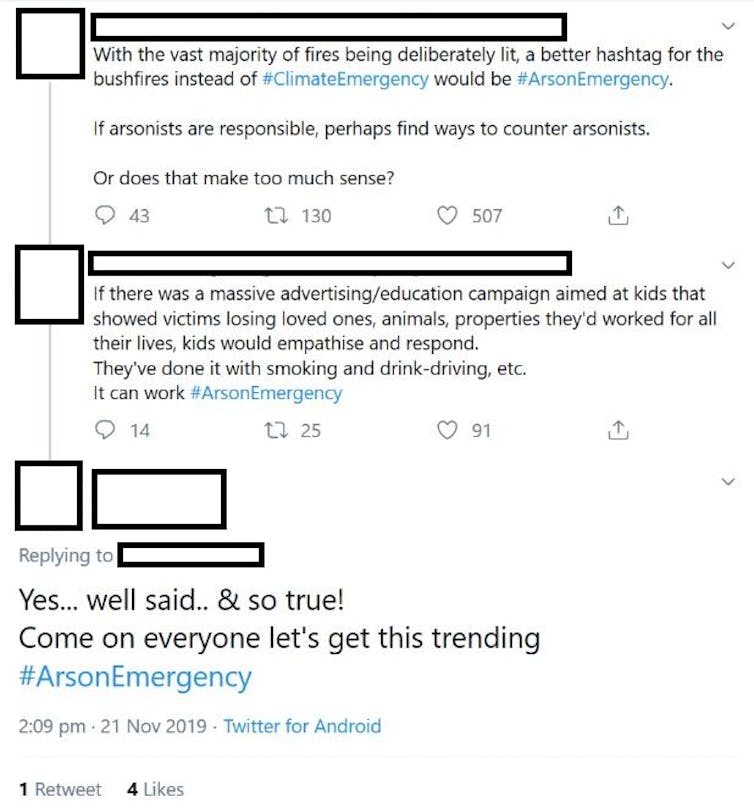 We suspect the origins of the #ArsonEmergency debacle can be traced back to a few accounts. Author provided

The hashtag was only tweeted a few times in 2019, but gained traction this year in a sustained effort by about 300 accounts.

A much larger portion of bot and troll-like accounts pushed #ArsonEmergency, than they did #AustraliaFire and #BushfireAustralia.

The narrative was then adopted by genuine accounts who furthered its spread. 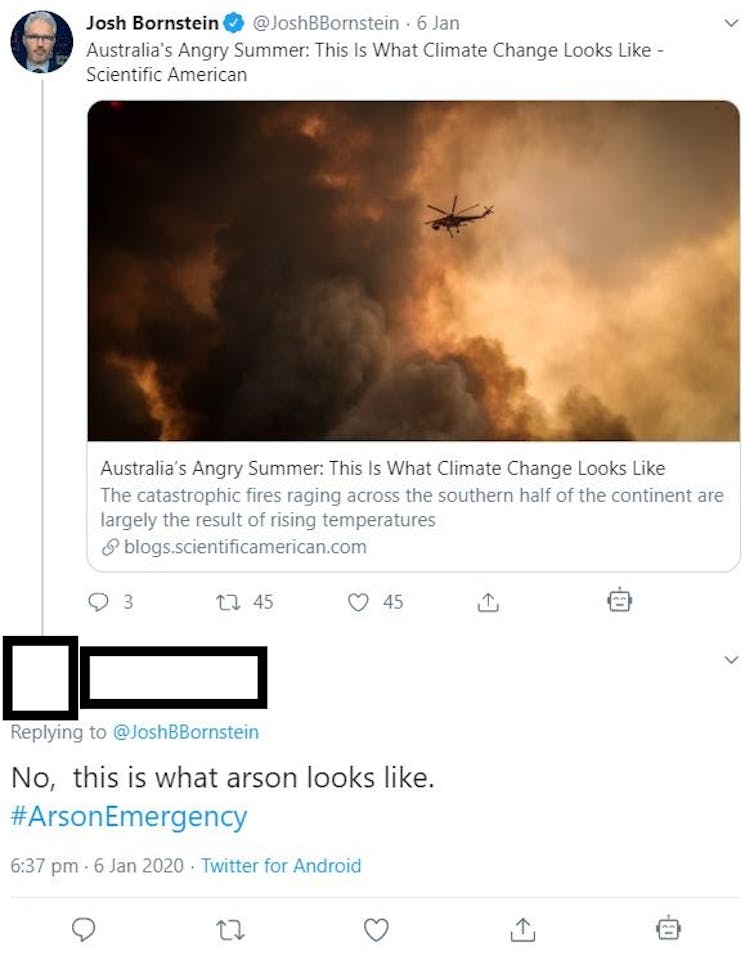 The inauthentic accounts engaged with genuine users in an effort to persuade them. author provided

Since media coverage has shone light on the disinformation campaign, #ArsonEmergency has gained even more prominence, but in a different light.

Some journalists are acknowledging the role of disinformation bushfire crisis – and countering narrative the Australia has an arson emergency. However, the campaign does indicate Australia has a climate denial problem.

What’s clear to me is that Australia has been propelled into the global disinformation battlefield.

It’s difficult to debunk disinformation, as it often contains a grain of truth. In many cases, it leverages people’s previously held beliefs and biases.

Humans are particularly vulnerable to disinformation in times of emergency, or when addressing contentious issues like climate change.

Online users, especially journalists, need to stay on their toes.

The accounts we come across on social media may not represent genuine citizens and their concerns. A trending hashtag may be trying to mislead the public.

Right now, it’s more important than ever for us to prioritise factual news from reliable sources – and identify and combat disinformation. The Earth’s future could depend on it.