In this record-breaking bushfire season, notifications from emergency managers have become a familiar feature of Australian life. Terms like “out of control” and “contained” are regularly heard as descriptions of the status of fires, but what do they actually mean?

These terms vary slightly between Australian states and territory, but as similar firefighting strategies are used Australia-wide, the meanings are comparable.

The status of a fire is a description of the stage of the firefighting effort, not the nature of the fire or its likelihood of being a threat. This means that to understand what actions to take when an active fire is nearby, it’s important to follow the advice of your local fire and emergency information sources.

Read more: We have already had countless bushfire inquiries. What good will it do to have another?

‘Going’ or ‘out of control’

A fire described as “going” or “out of control” is one where parts of its perimeter are burning and have the potential to spread into unburnt areas.

The perimeter is the focus as it is where unburnt fine fuels (consisting of the litter on the forest floor, shrubs and bark) are being ignited and burning rapidly. The flames of these subside quickly, so the majority of a fire’s interior consists of blackened area where only heavy fuels such as logs and branches continue to burn.

A fire will be given the status “going” when it is first detected or reported to emergency authorities. The status may also be used for fires that were controlled and subsequently breakaway (escape control). 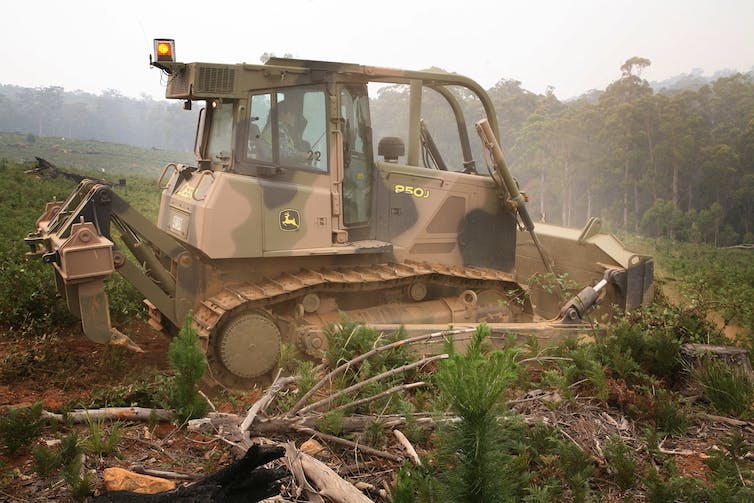 Bulldozers will clear vegetation to starve a fire of fuel. AAP/Major Cameron Jamieson

“Going” fires will typically be the subject of concentrated firefighting effort to prevent growth and minimise the impacts to things of value (i.e. lives, property, infrastructure and ecosystem services). However the term is inclusive of all fires that are able to spread, so encompasses everything from shrubs burning under a tree hit by lighting to intense firestorms.

Contained or “being controlled’

While our images of firefighters involve hoses spraying water against the flames, water is, in fact, inefficient because of the vast amounts needed to douse the large amounts of burning vegetation and the difficulty of maintaining supply in rugged terrain.

Instead, to stop fires spreading, firefighters create containment lines where all fuels are removed in bands adjacent to the fire’s perimeter. This prevents the fire reaching unburnt vegetation, starving the flames of new material to burn. 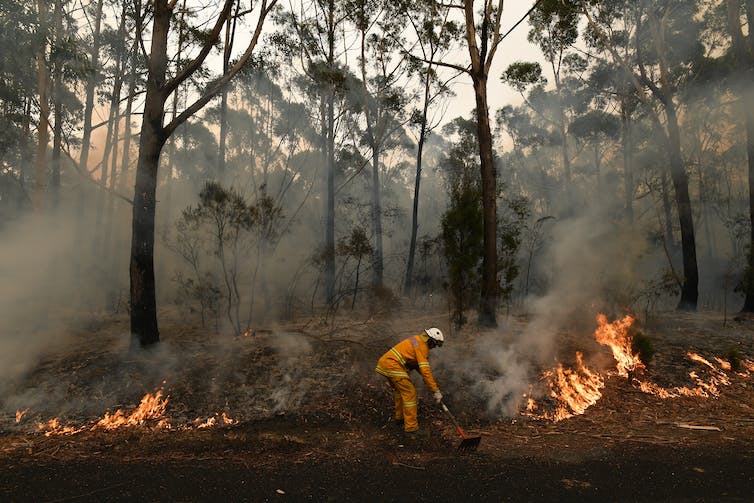 Handtools can be used to break the continuity of fuels to prevent fires spreading. AAP/Dean Lewins

So how are containment lines created? Typically, with heavy machinery (often bulldozers), which scrape away all burnable material around the edge of the fire so nothing but mineral soil remains. In rugged terrain, this may be done by hand, by specialist crews using tools such as rakehoes and chainsaws.

Where there are existing areas of low fuel in the landscape, such as roads, bodies of water or previously burnt areas, firefighters may also include these as part of their containment strategy.

The containment line is built next to the burning fire edge, so the more intense or erratic a fire is, the more difficult and dangerous it is for crews to work.

It’s not safe to construct a line where fires are spreading rapidly, producing many embers, behaving erratically, have deep flames or are exhibiting firestorm-type behaviours (where the fire is so intense it can generate extreme winds and even lightning).

At such times firefighters will either move to parts of the fire where behaviour is less intense (typically where the wind is pushing the flames away from unburnt fuel), apply indirect firefighting methods such as backburning (burning areas in front of the advancing fire) or retreat and focus on protecting life and property.

The exceptionally hot, dry and windy conditions of the 2019/20 fire season have resulted in many rapidly expanding bushfires that have overwhelmed the capacity of firefighters to build containment lines.

As a fire is being contained, crews will be assigned to patrol the already constructed parts of the line to prevent escapes. The burning-out of unburnt fuels within the containment lines may be done to reduce the chance this ignites and causes issues at a future date. 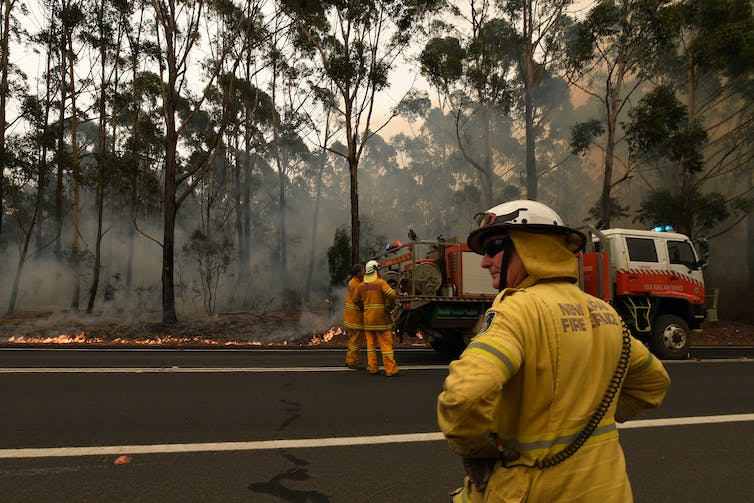 Roads can be used as part of a containment line. AAP/Dean Lewins

Under control, or ‘patrol’

A fire that’s “under control” has a full containment line around it, and there has been a degree of consolidation so fire escaping outside the lines is unlikely.

This consolidation is called “mopping up” or “blacking out”, and consists of crews working along the edge of the fire to extinguish or stabilise any burning material in the fire area within a set distance of the line.

Fire elevates the risk of trees falling, so at this stage there may also be work to identify and treat dangerous trees.

After line consolidation is complete, routine patrols to prevent escapes will continue for days to weeks until the fire is deemed safe.

The final status applied to bushfires is “safe”. This is where deemed that no sources of ignition within containment lines have the potential to cause escapes.

Once a fire is declared safe, it’s assumed no longer necessary to maintain patrols and the fire can be left alone.

After the fire season it’s common for management agencies to rehabilitate the containment lines, to restore the site to its prior condition to protect biodiversity values and water quality.

The status of a fire can change - even fires thought to be safe occasionally break away when hot and windy weather returns. Regardless of whether there are known fires in your area, it is important to have a bushfire survival plan and to pay attention to the advice of your local fire and emergency information sources