Last week, the World Health Organization (WHO) declared coronavirus a global health emergency. In the same statement, the agency said it

welcomed the leadership and political commitment of the very highest levels of Chinese government, their commitment to transparency and the efforts made to investigate and contain the current outbreak.

Indeed, Chinese authorities have put in place unprecedented measures to slow the spread of coronavirus, including quarantining Wuhan and surrounding cities, home to over 45 million people.

While some have praised Chinese authorities for these tough measures, others have criticised the local and central governments for cover-ups, a lack of transparency, being slow to react and mishandling the early stages of the outbreak.

For some, China’s authoritarian political system is to blame for making the situation worse and delaying action until it was too late.

Now, the crisis is being seen as a key test of President Xi Jinping’s leadership and the ability of the Communist Party to effectively respond to and manage a health emergency. 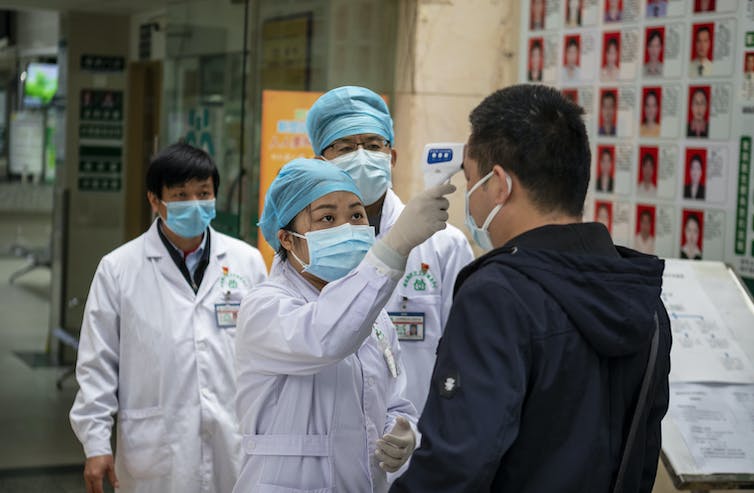 There wasn’t national attention on the outbreak until late January, weeks after the government reported the first cases to the WHO. Alex Plavevski/EPA

Too slow to react

Suspicions of the new virus first emerged in early December. But it wasn’t until the end of the month that the Chinese government reported 27 cases of pneumonia to the WHO. The state media mentioned this only briefly.

A day later, police in Wuhan detained eight doctors for spreading “rumours” about a new outbreak of suspected SARS.

China reported the first death from the outbreak on January 11, but without accompanying warnings to the public to take extra precautions. No new infections were reported until January 20, when Xi issued a directive for party committees and governments at all levels to take effective measures to combat the outbreak.

During this time, it was business as usual in Wuhan, with the government organising a New Year banquet for 40,000 families.

By the time Xi issued his directive, it had been seven weeks since the virus was first recorded and three weeks since it was reported to the WHO.

Crucially, it was also 10 days after the official start of the Spring Festival (Lunar New Year) travel period, the largest annual human migration in the world.

At this point, the central government finally sprang into action, locking down Wuhan, shutting down public transport, building new hospitals and giving more leeway to the media to report on the unfolding crisis.

But it may have been too late. According to some estimates, five million people had already left Wuhan before these measures took effect.

The initial reaction of the Chinese authorities to the outbreak was to rely on traditional forms of censorship rather than transparency.

This is clear from the initial suppression of whistleblowers – the detention of the eight doctors for spreading “rumours” – as well as the subdued reporting from the state media before January 20.

One possible reason for the silence is Beijing believed it could contain the outbreak without any extra measures, particularly at the start, when the nature of the virus was uncertain. The authorities may have believed mass panic would do more harm than the virus itself.

But after containment appeared unlikely, the central government wasted crucial time deciding what to do. Without clear direction from Beijing, the authorities in Wuhan chose not to act, which allowed the infection to spread.

Media coverage of the outbreak finally exploded after Xi’s January 20 directive, including by non-state media. However, strict censorship returned after two weeks, ostensibly to combat misinformation.

As anger deepens over how the crisis has been handled, the public will want to see officials lose their jobs and even be prosecuted.

The process of finding people to blame has started within the Communist Party. And already, we are seeing local government officials being sacked.

But the central government’s role should also be scrutinised. Beijing must have known about the outbreak by December 31, when it reported the cases of pneumonia to the WHO. Serious questions need to be asked, then, about why the central government chose not to respond publicly for another three weeks.

When things go right in a dictatorship, the credit goes to the leader. But when things go wrong, the blame can also rise to the top.

In the late 1950s and early 1960s, the party was able to push the blame for the Great Leap Forward and the subsequent Great Famine onto local cadres. However, Mao’s prestige within the party also suffered greatly as a result.

Xi has followed Mao’s leadership style in many aspects, not least the cult of personality he has built around himself. He has also been consolidating power since he became party general-secretary in late 2012.

Sensing the potential political damage from the current crisis, the state media is now trying to shield Xi from direct criticism and blame.

Instead, it is focusing on the responses of other top leaders, particularly Premier Li Keqiang. In fact, for nearly a week from late January to early February, Xi did not appear on the front page of the party mouthpiece, People’s Daily, in stories related to the outbreak. 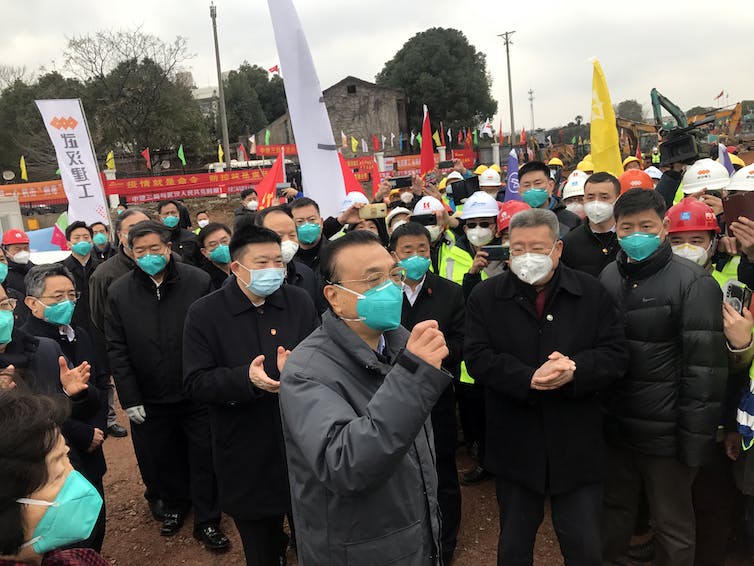 Premier Li Keqiang was mocked online for leading workers in a cheer when he visited Wuhan. Shepherd Zhou/EPA

All propaganda must have heroes and villains. The virus is the villain in this story, and the biggest heroes are the front-line doctors who are working long hours in dangerous conditions to fight it. The people, government and party have also been cast as heroes, united against a common threat.

The party knows the public has low trust of authorities when it comes to transparency, as it has an extensive history of cover-ups of everything from natural disasters to accidents to outbreaks of other diseases like SARS.

It hopes the focus on unity and heroes, coupled with more timely updates, will restore people’s trust in the government’s handling of this outbreak.

However, this is unlikely given the scale of public anger at the moment. This, in turn, may explain the state media’s search for other villains, particularly the US and other western countries that are shutting their borders to China.

A key test for the party

The party’s prestige and legitimacy are both on the line. Crises like this are a serious test of the party’s assertions about the inherent superiority of China’s political system.

Ultimately, the Chinese people are likely to judge the party harshly, despite its efforts at narrative control.

One thing is for certain: the unfolding crisis is a human catastrophe, and Beijing has much to answer for.