The dating app Tinder has faced increasing scrutiny over abusive interactions on the service. In November 2019, an Auckland man was convicted of murdering British woman Grace Millane after they met on Tinder. Incidents such as these have brought attention to the potential for serious violence facilitated by dating apps.

The US version of the app added a panic button which alerts law enforcement to provide emergency assistance, in partnership with the safety app Noonlight. There is also a photo verification feature that will allow users to verify images they upload to their profiles, in an effort to prevent catfishing.

“Does This Bother You?” is another new feature, which automatically detects offensive messages in the app’s instant messaging service, and asks the user whether they’d like to report it. Finally, a Safety Center will give users a more visible space to see resources and tools that can keep them safe on the app.

These features are an improvement, but they won’t end the harassment of women via the platform.

My PhD research investigated experiences that make women feel unsafe on Tinder. It showed the app’s previous attempts to curb harassment have been inadequate.

In 2017, Tinder launched a feature to allow users to send animated messages, called “Reactions”, in reply to unacceptable messages they received. The negative images, which only women could send, included an eye roll and throwing a drink in someone’s face. Tinder claimed Reactions would give users a fun and easy way to “call out” the “douchey” behaviour of men.

The main critique of Reactions is that it puts the onus on women, rather than the app itself, to police the abusive behaviour of men. The effect was to distance Tinder from its users’ behaviour, rather than engage meaningfully with it.

A swipe in the right direction

Tinder’s latest safety mechanisms are an improvement. The newly released tools suggest Tinder is taking the harassment of women more seriously, and a button that alerts law enforcement might actually protect users from physical abuse.

But the panic button is only available in the United States. Given the service operates in more than 190 countries, Tinder should consider rolling it out worldwide.

The new “Does This Bother You?” feature could also prove useful in preventing overt harassment. Using machine learning, it will prompt users to report inappropriate messages they receive through the service. Research and a range of social media pages show that harassing and abusive messages are commonly facilitated through the platform’s instant messaging service.

Because a great deal of harassment and abusive behaviour is normalised, it is unclear how much Tinder’s new measures will protect women. My research showed that many women using Tinder experienced behaviour that made them feel uncomfortable, but they didn’t think it met the threshold of abuse.

Sometimes, abusive behaviours can be initially interpreted as romantic or caring. One woman I interviewed reported receiving an overwhelming number of lengthy text messages and phone calls from a Tinder user who was pressuring her into having dinner with him. At first, the woman considered the man’s behaviour “sweet”, viewing it as an indication that he really liked her. But after the number of his messages became torrential, she feared for her safety.

Read more: It's not about money: we asked catfish why they trick people online

For experiences like this, Tinder’s “Does This Bother You?” feature would be ineffective since the messages were sent via SMS. The limitations of the in-app messaging feature, such as the inability to send photographs, led many of the women I interviewed to talk to prospective dates through other digital media. But Tinder cannot identify communication on other services. The inability to send photos, however, does prevent users from receiving unsolicited images within the app.

Even if the man’s messages were sent in-app, it is unclear whether the “Does This Bother You” algorithm would prompt users to report messages that are seemingly romantic in content. 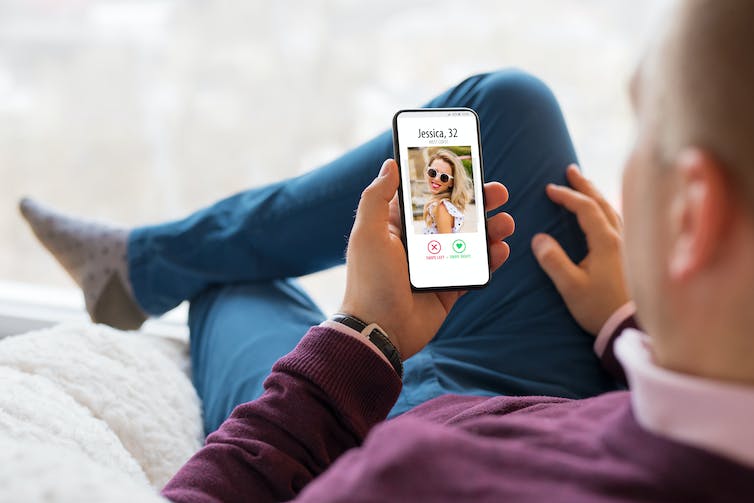 Tinder’s new safety features suggest the app is taking abuse more seriously. But they’re not enough to prevent harassment of women via the platform. Shutterstock/Kaspars Grinvalds

For the “Does This Bother You?” feature to be effective, Tinder needs to be better at responding to users’ reports. Some of the women I interviewed stopped reporting other users’ bad behaviour, because of Tinder’s failure to act.

One woman described reporting a man who had sent her harassing messages, only to see his profile on the service days later. This points to a big problem: Tinder does little to enforce its Terms of Use, which reserves the right to delete accounts that engage in harassment.

Tinder’s failure to respond to user reports sends a messages that they’re not justified, leaving users with the impression that harassment is tolerated. The app’s new safety features will only help users if Tinder does better to address user reports.

While Tinder’s new safety mechanisms are an improvement, the platform will need to do more to address normalised abuse. It can begin to do this by listening to women about what makes them feel uneasy, uncomfortable, and unsafe on the app.