Is the sky blue on other planets, like on Earth? What is an atmosphere, and do other planets have one? – Charlie, age 10

G'day Charlie, and thank you so much for your incredibly curious question.

Before I get too excited talking about the atmospheres of other planets, first we have to talk about what an atmosphere actually is. 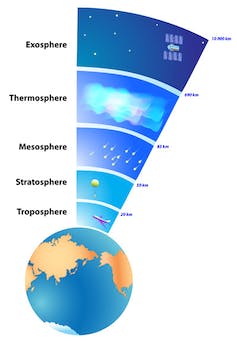 The atmosphere is normally the outermost layer of a planet. On rocky worlds like Earth it is usually the lightest and thinnest layer.

What’s in an atmosphere?

Atmospheres can contain a wide variety of gases. Most of Earth’s atmosphere is a gas called nitrogen that doesn’t really react with anything. There’s also a fair bit of oxygen, which is what we need to breathe. There are also two other important gases called argon and carbon dioxide, and tiny amounts of lots of other ones.

The mix of gases is what gives a planet’s atmosphere its colour.

Read more: Curious Kids: Why is the sky blue and where does it start?

Earth’s atmosphere is made up of gases that tend to bounce blue light in all directions (known as “scattering”) but let most other colours of light straight through. This scattered light is what gives Earth’s atmosphere its blue colour.

Do other planets have blue atmospheres? Some of them sure do!

The blue “haze” surrounding Earth in space is caused by the scattering of light from Earth’s atmosphere.

The atmospheres of the two ice giants in our solar system, Neptune and Uranus, are both beautiful shades of blue.

However, these atmospheres are a different blue than ours. It’s caused by the huge amounts of a gas called methane swirling around.

(Side note: methane is also the main component of farts. That’s right, there’s a layer of farts on Uranus.) 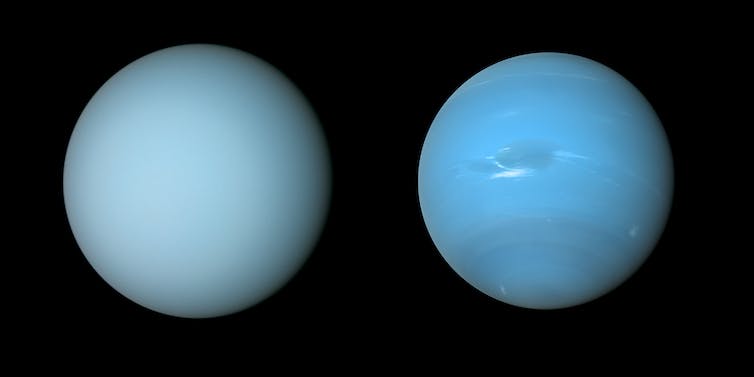 Jupiter and Saturn, however, have completely different-coloured atmospheres.

Ice crystals made of a chemical called ammonia in Saturn’s upper atmosphere make it a pale shade of yellow.

Uranus’ atmosphere also contains some ammonia, which makes the planet a slightly greener shade than the deep blue we see on Neptune.

Jupiter’s atmosphere has distinctive brown and orange bands, thanks to gases that may contain the elements phosphorus and sulfur, and possibly even more complicated chemicals called hydrocarbons.**

The Juno spacecraft flying past Jupiter in 2017.

In some extreme cases, the entire planet might just be a huge atmosphere with no rocky surface at all. Astronomers and planetary scientists like myself are still trying to work out whether Jupiter and Saturn have rocky surfaces, deep down in their atmosphere, or whether they’re both simply huge balls of gas.

The Cassini spacecraft took this cracking image of Saturn back in 2010. NASA/JPL-Caltech/Space Science Institute

However, there are some planets that have no atmosphere at all! The Sun’s closest and smallest neighbour, Mercury, is one example. Its surface is exposed to the vastness of space.

Beyond our solar system

So far I’ve been talking about the atmospheres of planets in our Solar system. But what about planets in other planetary systems, orbiting other stars?

Well, astronomers have been detecting the atmospheres of these planets (which we call “exoplanets”) for the past 20 years! It wasn’t until last year, however, that astronomers managed to detect the atmosphere of a rocky exoplanet. The planet is called LHS 3844b and it’s so far away that the light takes almost 50 years to reach us!

LHS 3844b weighs twice as much as Earth, and we astronomers thought it would have a pretty thick atmosphere. But, to our surprise, it has little to no atmosphere at all! So it might be more like Mercury than Earth.

Animation showing an artist’s impression on what LHS 3844b’s surface may look like.

We still have a lot to learn about far-off planets and discovering one with an Earth-like atmosphere that’s ripe for life is still many years away.

Maybe, Charlie, you could be the first astronomer to detect an Earth-like atmosphere on another world!