In the wave of nostalgia about the death of the Holden brand in Australia, something important has been overlooked. 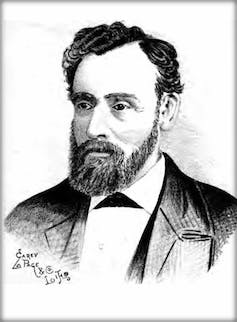 Their origins stretch back to 1856, when James Holden established a saddlery in Adelaide.

The firm expanded into the car industry in the first world war when the Commonwealth government placed a ban on the import of cars, and only permitted import of chassis.

Holden seized the opportunity to build the cars on the imported American chassis.

The tariff on imported cars introduced after the war led the firm to negotiate a deal where it assembled (“manufactured”) General Motors cars, often Chevrolets.

Holden advertising said the “new Chevrolets” were “built in Australia for all conditions of service”. His son Edward sold out to the Americans in 1931 who renamed the firm General Motors Holden. 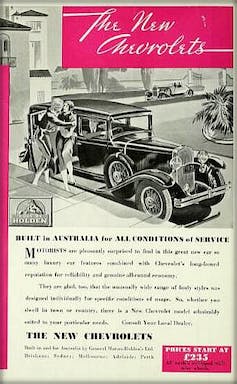 During the second world war, it deftly offered its services to the Commonwealth government.

With car sales stalling, government contracts to produce trucks and aeroplane parts kept the firm in business and enabled it to develop the infrastructure that would allow it to shift from assembling vehicles to making them.

In May 1944 the government gave it permission to divert scarce war-time resources to drawing up plans for an Australian-made car.

But General Motors’ US president Alfred Sloan wan’t keen. Australia was a small market and he might not see a return on his investment.

And he had grave reservations about doing business with what he thought was a socialist Labor government. It owned railways and a telephone network, something uncommon in the US.

When Prime Minister Ben Chifley arranged a government loan of A£2.5 million, he agreed. 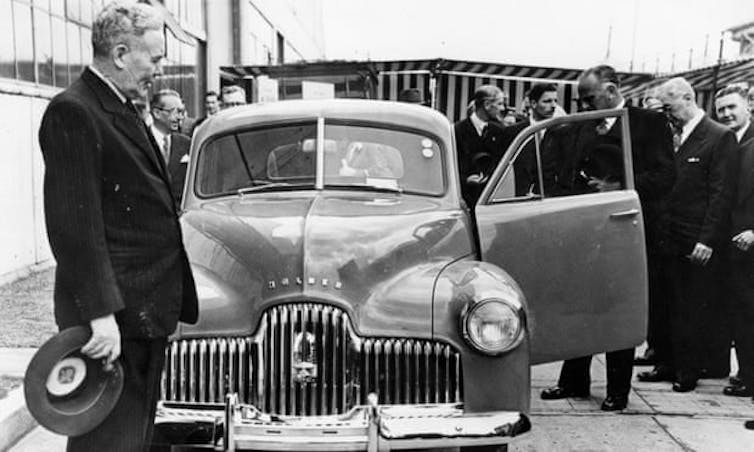 Prime Minister Ben Chifley at the launch of the Holden’s 48/215 in 1948. National Motor Museum/Heritage Images

Then the campaign to present the Holden as an Australian car began in earnest.

Politicians and journalists were wooed with special tours and advance viewings of the prototypes. However, it was made clear at the time that this was not an entirely Australian endeavour. 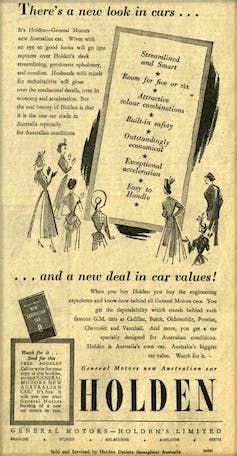 Chifley launched it at a lectern festooned with the Australian, British, and American flags, describing it as a link “between this country and the American people”.

An early advertisement described it as “made in Australia especially for Australian conditions” but with the “engineering experience and know-how behind all General Motors cars”.

“You get the dependability which stands behind such famous GM names as Cadillac, Buick, Oldsmobile, Pontiac, Chevrolet and Vauxhaull,” it reassured wives and husbands.

It entered the perfect market. After years of enforced austerity, Australians were ready to consume, and they finally had the money to do it. Broader post-war demographic shifts and social trends enhanced its appeal. As Australians moved to new suburbs on the outer fringes of cities, the Holden became an indispensable part of modern life.

It mocked rather than competed with Japan

Holden’s dominance began to erode in the 1960s in the face of competition from Ford and Japanese manufacturers. Rather than developing local solutions, GMH increasingly looked to its parent company GM for new Americian designs.

American commercials were imported and “translated”.

The removal of government tariffs on imported cars in the 1980s increased foreign competition. GMH responded by producing fewer models in Australia and “rebadging” imported GM cars as Holdens.

Reduced to a badge, Holden was losing its identity as well as its connection with Australians.

Although its financial fortunes improved in the 1990s, its Australianness was becoming more tenuous with each new model. By the new century, Holdens were indistinguishable from German Opels and South Korean Daewoos.

And became more foreign, the more it denied it

While advertising campaigns continued to extol Holden’s Australianness and, increasingly, its nostalgic connection with growing up, buyers could increasingly see through them. Holdens were no more Australian than Fords, Toyotas or Mitsubishis.

Its decision to end Australian manufacturing severed the last strand of sentimental attachment.

Denied ongoing government support, and facing a market that no longer identified with its products, GM decided its relationship with Australia was no longer worth the effort. This week’s announcement was the inevitable formality.

Read more: Why Australians fell out of love with Holdens