The drought in eastern Australia was a significant driver of this season’s unprecedented bushfires. But it also caused another, less well known environmental calamity this summer: entire hillsides of trees turned from green to brown.

We’ve observed extensive canopy dieback from southeast Queensland down to Canberra. Reports of more dead and dying trees from other regions across Australia are flowing in through the citizen science project, the Dead Tree Detective.

A few dead trees is not an unusual sight during a drought. But in some places, it is the first time in living memory so much canopy has died off.

Ecologists are now pondering the implications. There are warnings that some Australian tree species could disappear from large parts of their ranges as the climate changes. Could we be witnessing the start of ecosystem collapse? 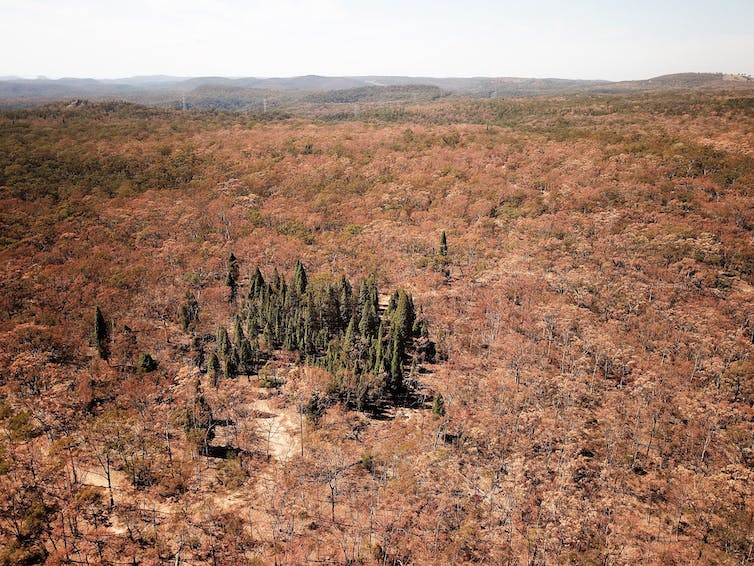 Why are canopies dying now?

Much of eastern Australia has been in drought since the start of 2017. While this drought is not yet as long as the Millennium Drought, it appears to be more intense. Many areas have received the lowest rainfall on record, including long periods of time with no rainfall. This has been coupled with above-average temperatures and extreme heatwaves.

The higher the temperature, the greater the moisture loss from leaves. This is usually good for a tree because it cools the canopy. But if there is not enough water in the soil, the increased water loss can push trees over a threshold, causing extensive leaf “scorching”, or browning. The extensive canopy dieback we have observed this summer suggests that the soil had finally become too dry for many trees.

Widespread rainfall deciciencies and higher temperatures across many parts of Australia. Bureau of Meteorology

Are the trees dead?

Brown or bare trees are not necessarily dead. Many eucalypts can lose all their leaves but resprout after rain.

Many parts of eastern Australia are now flushed with green after rain. In these areas, it will be important to assess the extent of tree recovery. If trees are not showing signs of recovery after significant rainfall, they’re unlikely to survive. In some cases carbohydrate reserves – which trees need to resprout new leaves – may be too depleted for trees to recover. 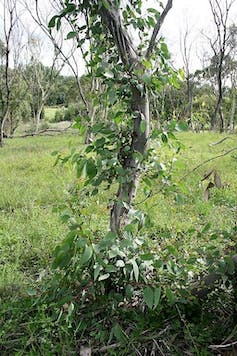 Snowgums in the New England area resprouting in March 2020, following heavy rain. The trees lost most of their canopy during drought in 2019. Trevor Stace, University of New England

But it’s likely that some forests now recovering from fire were already struggling with canopy dieback. So these two disturbances will test how resilient our forests are to back-to-back drought and bushfire.

Trees recovering from drought and/or fire may also enter the “dieback spiral”. The new flush of leaves following rain can make a particularly tasty meal for insects. Trees will then attempt to grow more foliage in response, but their ability to keep producing new leaves gradually declines as they deplete their carbohydrate reserves, and they can die.

Dieback spiral has led to extensive tree loss in the past, including in the New England area of NSW.

The capacity of eucalypts to resprout makes them naturally resilient to extended drought. There are some records of canopy dieback from severe droughts in the past, such as the Federation Drought. We assume (although we don’t know for sure) the forests recovered after these events. So they may bounce back after the current drought.

However, it’s hard not to be concerned. Climate change will bring increased drought, heatwaves and fires that could, over time, see extensive losses of trees across the landscape – as happened on the Monaro High Plain after the Millennium Drought.

Australian research in 2016 warned that due to climate change, the habitat of 90% of eucalypt species could decline and 16 species were expected to lose their home environments within 60 years.

Such a change would have huge consequences for how ecosystems function – reducing the capacity for ecosystem services such as carbon storage, altering catchment water resources and reducing habitat for native animals. 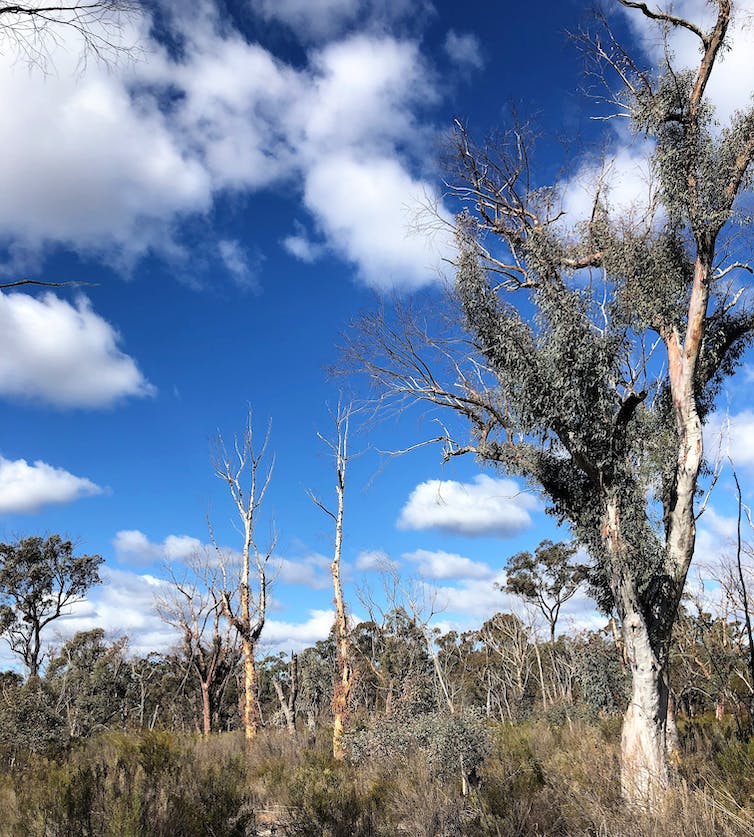 Some trees resprouted new leaves after losing their canopy. But in some cases these leaves are now dying, like on these scribbly gums in the NSW Pilliga in August 2019. Rachael Nolan 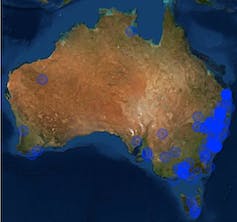 Landholders can help bush on their property recover after drought, by protecting germinating seedlings from livestock and collecting local seed for later revegetation. Trees that appear dead should not be cut down as they may recover, and even if dead can provide valuable animal habitat.

Most importantly, however, we need to monitor trees carefully to see where they’ve died, and where they are recovering. A citizen science project, the Dead Tree Detective, is helping map the extent of tree die-off across Australia.

People send in photos of dead and dying trees - to date, over 267 records have been uploaded. These records can be used to target where to monitor forests during drought, including on-ground assessments of tree health and quantifying the physiological responses of trees to drought stress.

There is no ongoing forest health monitoring program in Australia, so this dataset is invaluable in helping us determine exactly how vulnerable Australia’s forests are to the double whammy of severe drought and bushfires.