The economic impacts of the COVID-19 coronavirus will be enormous. Only blind optimism can deny the dark realities of the moment.

Policy responses are escalating by the hour. Markets have plummeted to GFC levels. Food staples are being regulated to ensure equitable supply. Yet, with so much fear and uncertainty, it’s difficult to forecast the depths of the downturn.

We can be sure the coronavirus will damage economic output in Australia. Our research shows the effects of the coronavirus are already impacting the Australian job market, and the future signs are worrying.

How do we know what’s happening in the economy?

Most metrics used to measure the health of the economy are “lagging indicators”. This means the effect of shocks like the coronavirus take time to materialise in large-scale networks such as national economies and labour markets. It’s likely we won’t know the full extent of the economic aftershocks for several months or potentially years.

However, there are also “leading indicators” that can help us monitor the economic effects of the coronavirus in near real-time. The most obvious is the stock market. But fear has taken hold of financial markets, causing violent daily swings as policymakers scramble to “flatten the curve”. Searching for a signal with this amount of noise is near impossible.

There are alternatives to reading the tea leaves of financial markets. One such alternative we have been monitoring is job advertisements.

In our previous work, we have shown job ads give an accurate indication of labour demand, and can predict skill shortages. As you would expect, more job ads typically means higher levels of demand, which is critical for healthy labour markets. 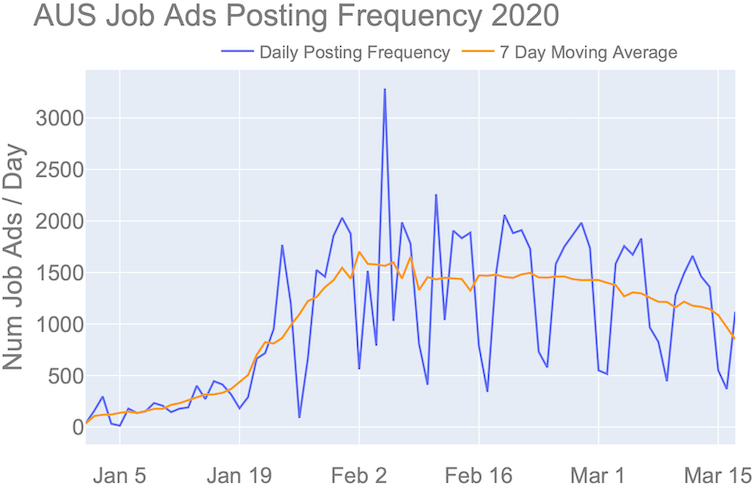 Worrying signs emerge when analysing the daily posting frequency of job ads in Australia from one of the major job boards in 2020. The posting frequency this year peaked in early February, and has been declining ever since, at an increasingly faster pace in the last two weeks.

Read more: Scott Morrison has said we'll face at least 6 months of disruption. Where does that number come from?

Such a decline this early in the year is odd, since the frequency of job ad postings follow a yearly seasonal pattern. In previous years, there were strong posting increases during January and February, followed by slower rates in March and April due to the Easter and ANZAC holiday periods. They then pick up again until the beginning of December, before significantly falling over the Christmas period. 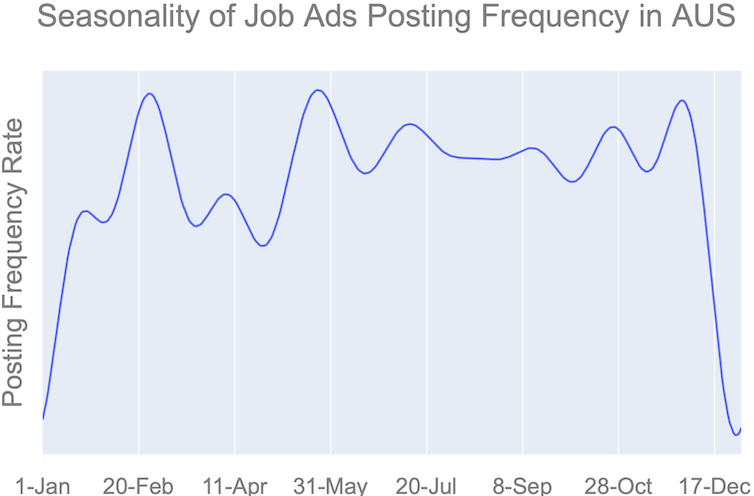 To see the change more clearly, we extracted the trends of posting frequencies to compare over a consistent time period. Here, we separately trained four different yearly models on the first 77 days of each year (from January 1 until March 17, for each of 2016, 2017, 2018, and 2020). The models were constructed using machine learning to uncover patterns of daily posting frequency rates and to isolate key components, such as trends and seasonality. 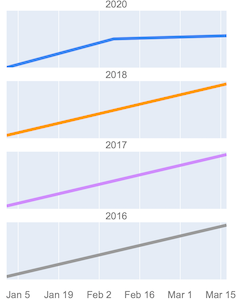 As the years 2016–18 show, job ad posts are usually on an upward trend from the beginning of the year until March. However, 2020 tells a very different story. In early February, the frequency of job ads began to decline and the trend line prematurely flattened.

This coincides with the early outbreak and spread of coronavirus beyond China. It’s also immediately after Australia’s worst bushfire season, which ravaged homes, businesses, and entire towns. 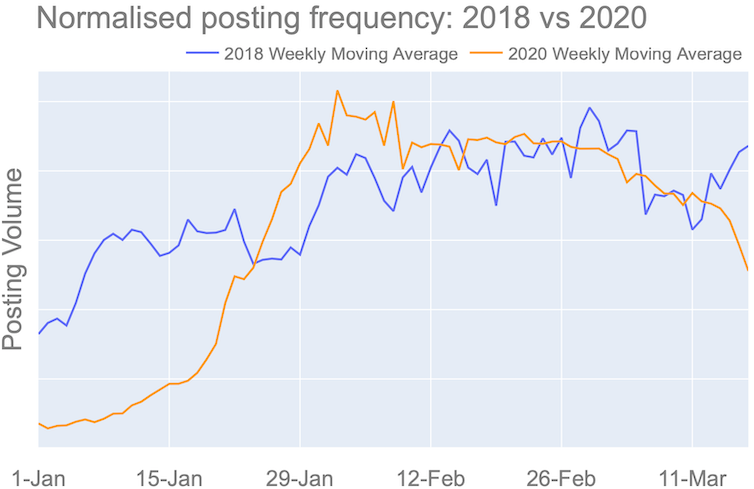 This indicates employment opportunities are already declining as a result of the coronavirus shock. Employers are less likely to take on the risk of hiring new staff because demand for goods and services are constrained.

We will not know the full extent of the impacts on Australian jobs for some time. The inertia in labour markets mean important indicators like unemployment and underutilisation rates are slow to reflect shocks.