Within our extended primate family consisting of lemurs, monkeys, and apes, humans have the largest brains. Our closest living relatives, chimpanzees, weigh about two-thirds as much as us, yet our brains are about 3.5 times larger.

Ours are also organised differently, and take longer to grow and mature. This extended period of development leads to a particularly long childhood for humans – one that requires extra parental care and protection.

Brains consume a large amount of energy. For a species that has a small brain at birth and a large one in adulthood, growth must either occur rapidly, or over a long time, or through a combination of both.

Read more: How smart were our ancestors? Turns out the answer isn't in brain size, but blood flow

Researchers first observed exceptionally large brains in the human fossil record from about 300,000 years ago. However, the slower rate of brain development, which is now unique to humans, began more than three million years ago in the australopithecine lineage. These two-footed hominins from Africa are thought to be ancestral to our genus, Homo.

What triggered the evolutionary brain expansion in hominins, and how this relates to human behaviour, remain hotly debated topics among palaeoanthropologists.

In 2000, an Ethiopian team uncovered an astonishing find in the country’s Dikika region: the skeleton of an ancient baby with a nearly complete skull.

Dated to about 3.3 million years ago, this youngster belonged to the same genus and species as the iconic australopithecine adult female Lucy – Australopithecus afarensis. 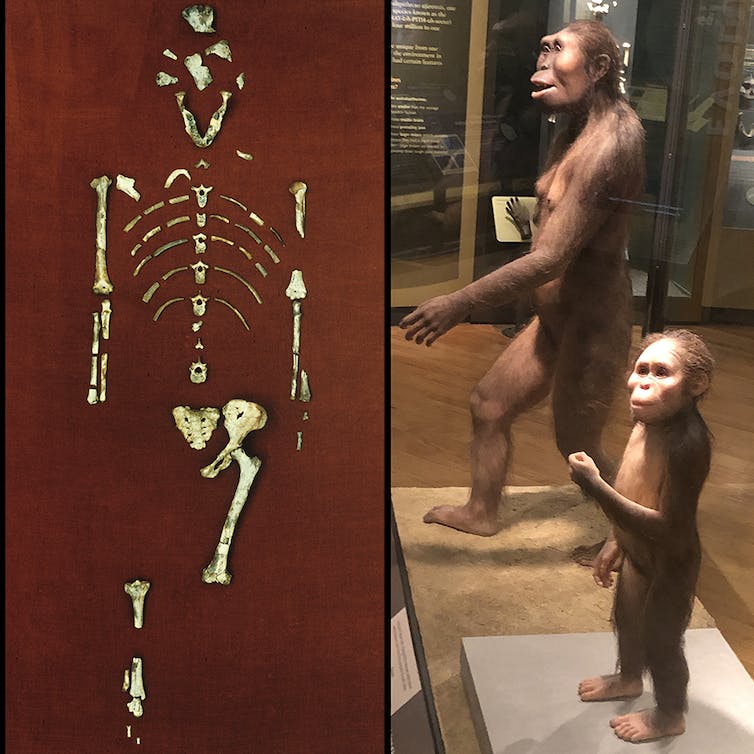 In a new paper published in Science Advances, we reveal that Lucy’s species shows surprising similarities and differences with both chimpanzees and humans. But in order to make these comparisons, we first needed to work out two critical details:

X-rays to the rescue

Brains do not fossilise, but as they grow and expand during childhood, the tissues surrounding them leave their mark inside the skull.

Using three-dimensional virtual models, researchers can measure the space within the brain case as a proxy for brain size. This is accomplished through computed tomography (CT), or synchrotron X-ray imaging.

This 3D animation shows the skull of the Dikika child.

A synchrotron is a machine that accelerates electrons close to the speed of light and directs them around a large ring. By forcing electrons to travel in a circular direction with magnetic fields, extremely bright light is produced that can be filtered and adjusted for research purposes.

A benefit of this approach is that permanent impressions of brain folds on the bone can provide clues about key aspects of the brain’s organisation. Synchrotron imaging can also provide powerful insights into dental development.

The truth is in the tooth

A seldom recognised fact about humans and other primates is that our milk (baby) teeth and first molars are marked with a line formed at birth. Similar to the growth rings of a tree, cross sections of teeth also reveal daily growth lines reflecting the body’s internal rhythms during childhood.

Read more: The lengthy childhood of endangered orangutans is written in their teeth

Having access to precise records of the Dikika child’s teeth, we were able to determine how old the child was when it died. Our team’s dental experts calculated an age of 861 days, about 2.4 years.

This means the infant grew its molar teeth rapidly – similar to chimpanzees, and faster than humans. Surprisingly, however, its rate of brain development seemed to have shifted from the fast lane to the slow lane.

Virtual models of australopithecine brain cases reveal members of Lucy’s species had a chimpanzee-like brain organisation, but grew for a longer period of time.

Our estimates suggest that by 2.4 years old, australopithecine children had brains that were only about 70% as big as adults, while average chimpanzees of the same age would have completed more than 85% of their brain growth. Thus, this species may bridge the gap between the long childhoods humans enjoy today, and the shorter ones of our ape-like ancestors.

Among primates in general, different rates of growth and maturation are associated with varied strategies of caring for infants. Slowing brain development is a way to spread the energetic needs of highly dependent offspring over many years. And this can be linked to a long reliance on caregivers.

Lengthening the period of brain growth also stretches out a species’ highly impressionable learning period. Extended brain growth in Lucy’s species may have provided a basis for the subsequent evolution of the brain and social behaviour in our ancestors.

These baby steps would have been critical for the long childhood that is now often regarded as a keystone of human uniqueness.