Amidst a global pandemic, some people are starting to dream big about infrastructure projects to help get Australia moving again. The decades-old dream of an Australian fast train is back in the headlines. But, as alluring as it sounds, the federal opposition’s idea for a bullet train from Melbourne to Brisbane is not a good use of a generation’s worth of infrastructure spending.

After the coronavirus crisis, there may be good reasons to fast-track infrastructure to create jobs and stimulate the economy. But it remains as important as ever that funding go only to worthy projects. A bullet train does not fit the bill.

Federal Labor claims the train would be an “economic game-changer” for the regions in its path. But a study into the train, commissioned by Labor itself in government in 2010, found no evidence for this.

Any regional development was too uncertain, the authors concluded, to be considered in their cost-benefit analysis. In fact, they found the project could damage towns along the route:

The history of the impact of transport improvement in Australian towns is that they concentrate activity in the larger centres and create commuter towns lacking in higher level services. Without concerted efforts to the contrary, this is also a likely outcome of the introduction of HSR [high-speed rail].

Of course, as advocates will be quick to point out, the study did conclude total benefits would outweigh costs by a considerable margin: $2.30 in benefit for every $1 of cost. But this rosy calculation was based on a series of assumptions that are either outdated or inappropriate. As our upcoming report on fast rail will explain in more detail, it’s unlikely the train’s benefits would exceed its costs if a rigorous independent assessment were carried out today.

The benefits are also narrowly concentrated. The biggest winners would be business travellers between Melbourne, Sydney and Brisbane. Wider benefits to society accounted for only 3% of the total, and the effect on economic growth was expected to be minimal.

That’s because the train would take a very long time to build. According to the study, the project would only be “shovel ready” 15 years after funding was committed. This makes it completely ineffective as a timely stimulus during a downturn.

Read more: We can halve train travel times between our cities by moving to faster rail

Advocates also argue the train would reduce emissions by taking high-emitting planes out of the sky. But a net reduction won’t be achieved for many years – maybe decades – because constructing the line would create so many emissions.

If built, this train would be the most expensive infrastructure project in Australian history. The study estimated the price tag at A$114 billion – A$130 billion in today’s dollars. As our chart shows, this is enough to pay for an entire generation’s worth of infrastructure. 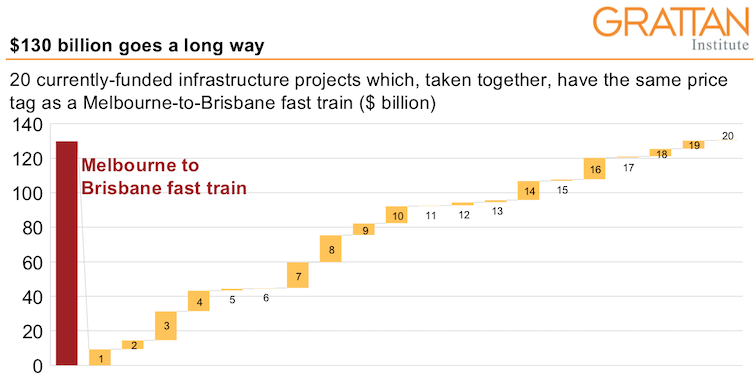 Projects are not presented as an alternative to the train but provide a point of reference for the scale of spending required for the high-speed rail project. Projects in yellow have active government funding commitments. Figures indicate total project funding costs, including private contributions. Figure for the fast train is in 2019 dollars. Source: Based on most recent figures from Department of Infrastructure, Transport, Regional Development and Communications, Infrastructure Australia, NSW, Victorian and Queensland governments, Brisbane City Council, AECOM, ABS, Author provided 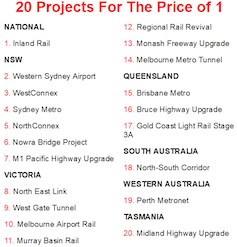 So what should be done? It is true current low interest rates would make borrowing to pay for such a large project cheaper than ever before, and fast-tracking infrastructure may be justified to aid economic recovery. But that doesn’t give governments a blank cheque to spend on whatever they like. The crisis does not absolve government of its responsibility to scrutinise projects to decide whether they are worthwhile. A good place to start is by identifying the problem you want to solve. If regional development is the goal, other options are available to governments that are more likely to be effective than a bullet train. Infrastructure Victoria and Infrastructure NSW both identify better digital connectivity as a pressing need for regional and rural areas. The current strain on the national broadband network as many of us try to work from home is a good reminder of the link between connectivity and productivity. If governments do want to focus on transport, “smaller picture” projects, though not as glamorous, tend to deliver more bang for buck, as previous Grattan work has argued. Read more: Our fast-growing cities and their people are proving to be remarkably adaptable Projects that can be fast-tracked to start construction soon are also more likely to support economic recovery. Infrastructure Australia’s priority list suggests a range of transport projects and initiatives that are much further developed, including improving the Sydney-Canberra rail link. And the priority list includes projects that benefit all states and territories, not just the big three on the east coast. The coronavirus crisis has upended many of our assumptions about “normal operating procedure” for governments. But it doesn’t mean we throw the old rule book out the window. Governments should only spend public money on projects that have clear and tangible benefits to society – not on grand “nation-building” projects that are big on style but low on substance.