In recent weeks, Singapore went from global success story in its response to the coronavirus outbreak to having the largest number of cases in Southeast Asia.

There are some 15,000 confirmed cases in Singapore as of this week – more than Japan, South Korea and Indonesia.

Most startlingly, though, is the number of migrant worker infections in the country, which dwarfs that of the general population. For example, of the 528 new cases detected on Tuesday, 511 were foreign workers living in dormitories, while another seven were workers living outside the dormitories.

Singapore’s approach to disease mitigation, generally speaking, mirrors the country’s approach to just about everything – control, surveillance and containment.

Read more: Why Singapore's coronavirus response worked – and what we can all learn

But the increasing COVID-19 infection rates among migrant workers suggest there is another side to the tight regulation that governs nearly every aspect of life in Singapore – the institutionalised neglect of the country’s 300,000-plus migrant workers.

And it is this neglect that, my research suggests, lies at the heart of explanations for Singapore’s COVID-19 crisis. 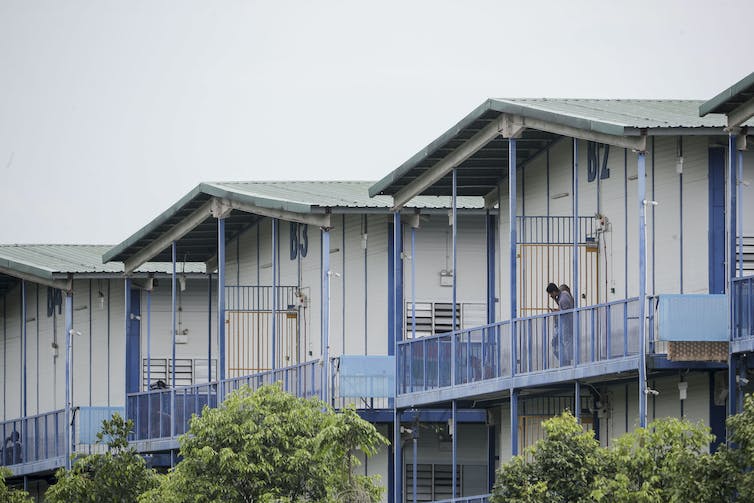 The majority of Singapore’s COVID-19 infections are among foreign workers in dormitories. Wallace Woon/EPA

Cramped rooms with one toilet for 80 men

In 2014-15, I carried out a large study of transient migrant workmen from India and Bangladesh in Singapore, interviewing close to 200 men over 18 months. Most worked in the construction and shipping industries, and some in the landscaping and cleaning sectors.

As well as uncovering stories of routine labour exploitation and debt bondage among the workers, I also found most workers’ living conditions were shockingly substandard.

Employers are supposed to provide meals for migrant workers, for example, but workers complained the food was often no more than soggy rice and gravy. Often, it was spoiled and inedible. 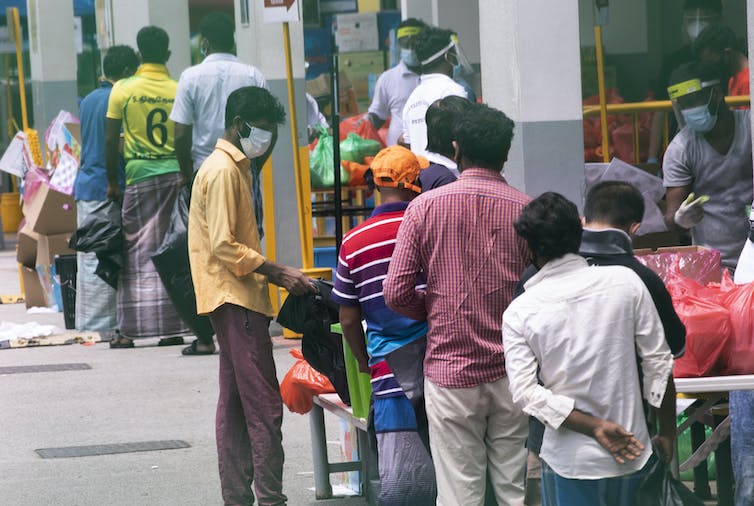 Migrant workers lining up to collect their food at a dormitory in Singapore. How Hwee Young/EPA

These dormitories only became common a couple of years ago when migrant-rights organisations began focusing on housing conditions of workers. The government’s response was to build large dormitories in remote, outlying areas.

This enabled the government to claim it had addressed criticisms of poor worker housing. At the same time, it ensured these workers were further separated spatially and socially from the rest of Singapore’s population.

This separation has been an ongoing concern of the government since the so-called “Little India riots” of 2013, which broke out after a migrant worker was knocked down and killed by a bus. More than 50 police officers and eight civilians were hurt, and dozens of Indian workers were either charged with offences or sent home.

Read more: Riots in Singapore as it struggles to juggle growth and migration

But not all, or even the majority, of workers live in dormitories. Many live on the upper floors of small construction subcontracting firms, or in shipping containers and other temporary housing on work sites.

The conditions are abhorrent: cramped rooms housing up to 30 men apiece, no air-conditioning or appropriate ventilation, bed bugs and cockroaches, and often just one filthy toilet shared by more than 80 people.

In both dormitories and these accommodations, two men often rotate on one bed. When the day-shift worker returns to the room to sleep, he takes the place of the night-shift worker using the same bed.

In these conditions, dengue and other waterborne diseases thrive. A few weeks before I arrived in Singapore in 2012, there was a massive outbreak of dengue among migrant workers in the industrial northwest. Many men were infected, and most swiftly deported.

In 2015, I visited a factory where five Bangladeshi men were pursuing a case for unpaid salary against their employer. They told me previous workers had contracted dengue and were deported while they were still sick. As a result, they were pushed by their boss to work longer hours, despite not being paid. The deportation of injured and sick workers is a common occurrence in Singapore.

These living and working conditions explain why we are seeing such high rates of COVID-19 infections now. The government’s main response has been the construction of several large dormitories for workers, but beyond that, it has yet to take comprehensive steps to improve conditions.

The government does have a salary and injury claims system for migrant workers, but NGOs in the country claim it – like policies to improve workers’ living conditions – is woefully inadequate. 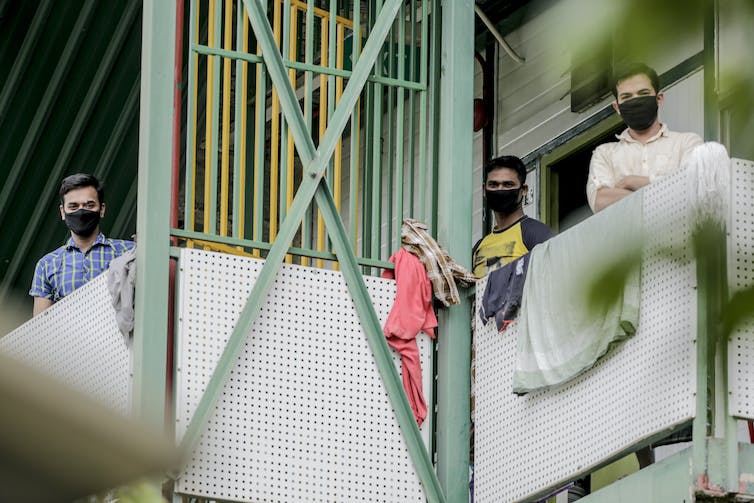 Workers have largely been restricted to their dormitories since the pandemic worsened. Wallace Woon/EPA

Last week, one of the participants in my research, a 32-year-old Bangladeshi man named Monir, sent me an email saying:

We are in lockdown for two months. Can’t go out. Singapore very danger now. But we are lucky we not stay worker’s dormitory. We sleep Geylang [a district of Singapore] company store.

During the current crisis, the workers in the dormitories are currently only allowed outside their rooms at certain times to reduce contact with others. Some have been relocated to offshore, floating accommodations where they are similarly confined.

When returning Singapore students were give a two-week holiday in five-star hotels rather than be a potential source of infection to their family, these men are being bunched together with a far higher vulnerability than if they were in a space alone or with fewer people.

The government should have been better prepared for a possible outbreak among these workers. Instead, it turned a blind eye to their needs.

When the government issued face masks to all Singaporeans at the fist sign of COVID-19 in early February, migrant workers were excluded. (The philanthropic arm of a state investor later distributed more than 1 million masks to migrant workers and domestic helpers.)

Read more: Refugees need protection from coronavirus too, and must be released

Last week, the government imposed a stay-at-home order for 180,000 migrant workers in the construction industry until May 4, confining them to their dormitories. Advocacy groups have warned about quarantining large groups of people together like this, comparing it to cruise ships.

While recent media coverage on the COVID-19 crisis in Singapore has exposed the substandard conditions of migrant workers, my study shows there is a longer history of institutionalised neglect of these men.

This is not an exceptional time for these workers – their rights have long been ignored because they are transient and, for the most part, deemed disposable.