This essay is based on the first episode of the new UTS podcast series “The New Social Contract” that examines how the relationship between universities, the state and the public might be reshaped as we live through this global pandemic.

Younger Australians will bear the economic, social and environmental costs that come from the COVID-19 pandemic. They’re making sacrifices in the name of public health and to protect the old and vulnerable. The heavy lifting of rebuilding will also fall disproportionately to them.

Prime Minister Scott Morrison referred to these sacrifices as “a social contract”.

A social contract in this sense is not something that gets recorded in legislation, but more of an unstated agreement that comes from practice, policy and circumstance. It is a reciprocal relationship, in which obligation and benefits rest on all parties – though these aren’t always evenly distributed.

How Australia will fare in a post pandemic world depends on this relationship between institutions, society and the state. And universities have a crucial role to play, by providing public goods such as understanding, training and research.

The social contract for universities has changed several times. Its different versions can be seen in the decisions students have had to make on entering university at different points across the 20th century.

These decisions tell us a lot about how the social contract for universities in Australia has changed, and what might be possible as it changes again.

In 1910 a student, let’s call him Frederick, had his family at the centre of decision-making.

Frederick is from Bendigo where his father is a shopkeeper. He is eager to study Medicine at the University of Melbourne. But before he even sets foot on campus, he has to sort out his finances.

That he can even attend university is thanks to his uncle Jim, a successful doctor. His uncle is paying for Fred’s textbooks, microscope, accommodation, living expenses and tuition fees – though the latter are only a minor component of the costs.

Fred and his uncle both expect the university will provide an education on par with that offered in British universities – training that will enable Fred to attain the cultural capital necessary for middle-class society and the technical knowledge to practise as a doctor.

On graduation, he knows he is expected to make his uncle proud by returning to Bendigo and joining the family practice.

Frederick’s story reflects the broad terms of a social contract under which universities, which received about half of their funding from state governments, trained a relatively small cohort of professionals. In return for social status, these professionals provided expert services to a rapidly growing society.

State government annual grants supported universities as institutions that would build the society and economy of the new Australian nation. 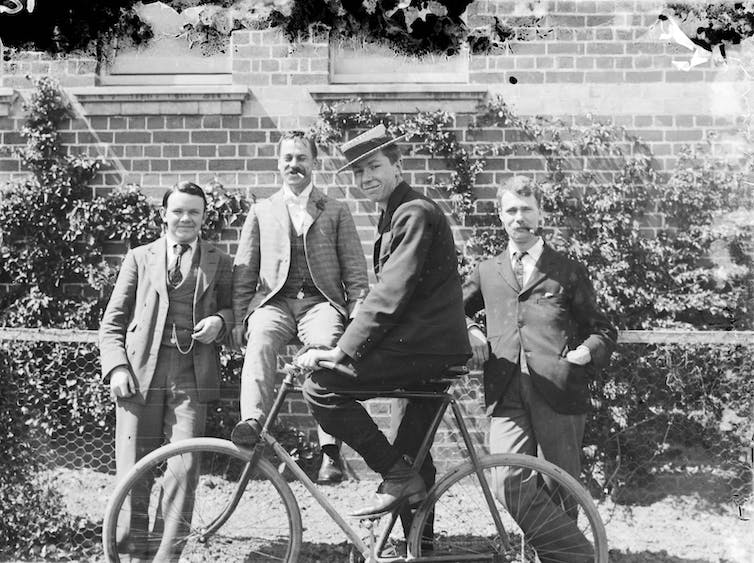 The 1910 student has family at the forefront of his decision-making. (Students Ormond College, Melbourne University 1896/1902) James Fox Barnard/State Library Victoria

Research played a minor role, with some funding from private companies and state governments. As far as the student was concerned, the cost (or risk) of attending university was borne by the family (or other patron) and it was to the family obligations were owed.

Forty years later, Margaret is one of a growing number of women entering university.

On her first day in a teaching degree at the University of Queensland, she meets chemistry student Eric. They find they have a lot in common. They have both joined UQ’s chapter of the Student Christian Movement, and have already signed contracts with their future employers who will financially support them during their studies.

The Queensland education department has awarded Margaret a bonded scholarship based on her high school matriculation results. Eric has taken a cadetship with the CSIRO.

After they graduate, both will have to work on their employers’ terms for three to five years.

Margaret’s and Eric’s stories reflect the terms of a social contract that emerged in the middle of the 20th century. Under this model, the costs of higher education could be borne by a student’s future employer such as government departments like the Postmaster-General or the railways, or private entities such as manufacturers and mining companies.

Connected to an expanding network of state secondary schools, this new pathway delivered benefits to students who would not otherwise have been able to go to university. This enabled them to join the ranks of the expanding white collar, salaried middle class, in return for a commitment to work.

The same logic underpinned the creation of two postwar Commonwealth programs: the Commonwealth Reconstruction Training Scheme, which enabled 21,000 ex-servicemen and women to receive a free tertiary education, and Commonwealth Scholarships, which covered fees and in some cases living expenses on the basis of secondary-school results.

Employers benefited, but so did the state, which saw this as a more directed way of providing funding to universities to produce skilled graduates in needed areas.

Eager to boost post-war development and in the strategic context of the Cold War, universities expanded research, helped by new direct grants from the Commonwealth.

It’s 1975 and Daryl, having passed his high school matriculation exam, enrols in the recently opened Macquarie University without having to worry about finances at all.

Since 1974, fees have been abolished and, once Daryl fills out the right form, he can get student assistance for living expenses based on a means test rather than a competitive exam.

Like increasing numbers of his generation, Daryl decides to study science. But he can switch degrees if he finds he is better suited to another program.

He lives in a share-house with other students. With less pressure to pass every subject to keep his place, he enjoys his social life in an inner suburb. He forms a punk rock band with some university friends and, for a few years after graduation, tours pubs around Australia. 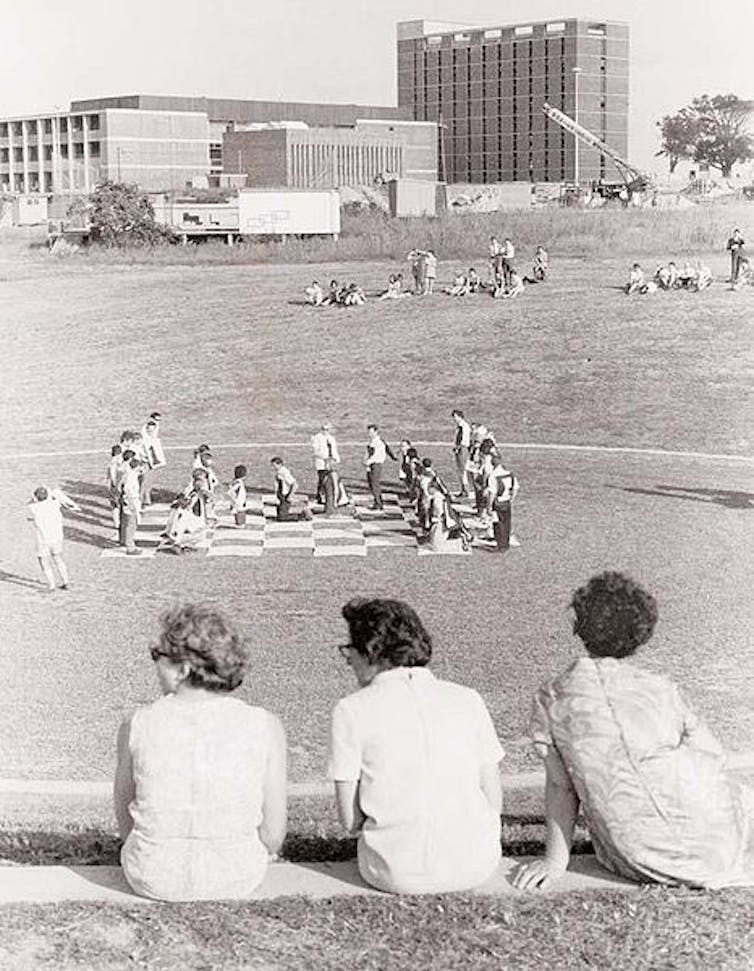 In the mid-20th century, the costs of higher education were often borne by the student’s employer. (First Students at Macquarie University, Sydney. 1967) Wikimedia Commons

Eventually Daryl settles into a job at the Australian Bureau of Statistics. He feels lucky to find employment in an expanding public sector during a period of economic stagnation.

The agreement Daryl made on entering university was not with his family or future employer, but with the state itself, when he applied for student assistance.

Prime Minister Gough Whitlam’s government abolished fees and reduced financial barriers to study. This reallocated the cost of higher education from state governments to the Commonwealth, and the benefit to society.

Daryl benefited because he got a secure job in the public service. And society benefited through his skilled employment and active participation in the cultural and social life of the nation.

No one in Ashley’s family has ever been to university before. But the introduction of the new Higher Education Contribution Scheme (which means she doesn’t have to pay fees until she begins earning money) has opened places for people like her.

Conscious HECS is just a loan, Ashley wants a degree that gets her a job. That’s why she picks Communications. And because she’s interested in video production, she gets involved in the film society.

Ashley hopes this might give her an advantage in a very competitive industry. She doesn’t have much time for socialising, because she also has a part-time job to help pay her living expenses.

Ashley’s experience reflects a social contract ushered in during the late 1980s and early 1990s. With the reintroduction of student fees and creation of HECS, students knew they were paying a much larger contribution to their higher education.

They expected direct benefits in terms of future employment options and income. An emphasis on “human capital” came to the fore and universities were told to equip students with skills they could can take into the job market. 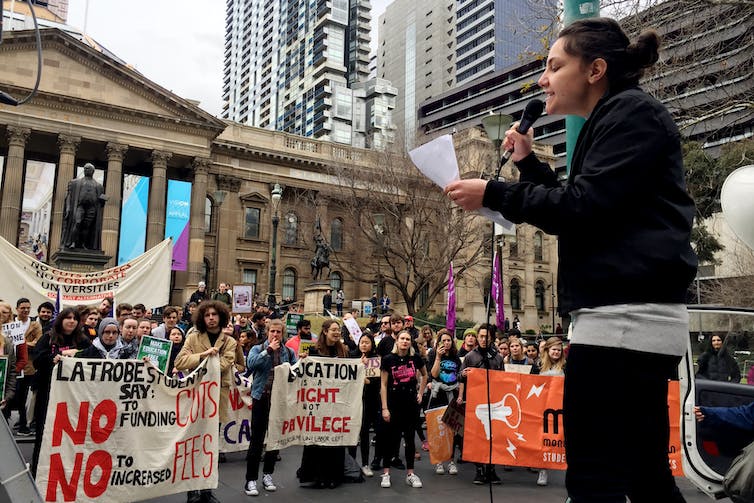 They also competed for a reduced amount of research dollars which were now distributed on the basis of competitive application through a newly created entity, the Australian Research Council.

And they competed with high paying international students whose numbers grew by 2,000% between 1986 and 2006, providing an extra non-government source of income.

Competition created national and global university rankings and research metrics as a way of measuring value. This social contract worked within the terms of the market economy.

While on average, graduates earn more than non-graduates, a degree no longer guarantees employment. Going to university is more expensive that before, and its returns are less guaranteed to convert into personal benefits.

And COVID-19 has pulled on the threads of the already worn fabric of higher education policy.

The deferred nature of the HECS payment, use of market mechanisms to allocate value, and the enormous supplement that comes from international student fees, has pushed the idea of the social contract for higher education out of view.

After a summer of devastating fire, universities, society and even some Australian states have recognised the country needs a social and economic framework dedicated to the conditions of habitability.

To achieve that, care for the planet, and each other, must be at the heart of all we do.

COVID-19 has also revealed people’s willingness to participate in collective action is just as crucial to effecting transformation as is expertise.

What does that mean for universities? What is their purpose in the 21st century? What new set of obligations and expectations will students face? What should we ask of them? What role should government play?

These are the questions our sector should be asking as we face lengthening months and years in which the world higher education in Australia, and the lives of all those who rely on it, is likely to grow even more precarious.

Next week’s podcast will explore the current context of the crisis for the university sector.

Universities and the public in the 20th Century was made by Impact Studios at the University of Technology, Sydney - an audio production house combining academic research and audio storytelling.