We set off from Fremantle Harbour at 6 am – a ridiculous hour university students aren’t usually accustomed to – and sailed to Perth Canyon, 120 kilometres away.

A fellow volunteer and I were constantly on watch, too nervous and excited to take our eyes off the horizon in case we missed the tell-tale spray of a pygmy blue whale blow.

We searched for hours with nothing to show for our efforts. My eyes began playing tricks on me. Was that white dot in the far distance the blow of a blue whale? Was the crest of that wave more than just white water? 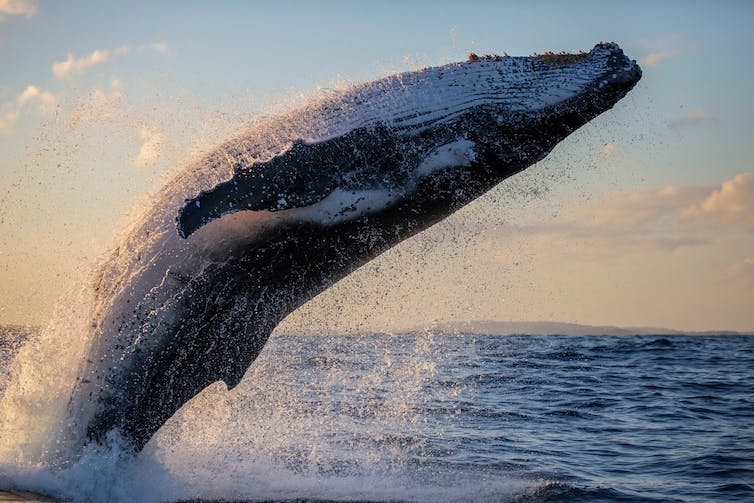 Whales can be hard to spot because some species spend little time at the surface. Shutterstock

In the early afternoon, finally, a magnificent spray of white water. Fully visible at 9 metres above the ocean surface, the sign of a pygmy blue whale. We surveyed about six blues that day, as well as a pod of bottlenose dolphins.

The behaviour of whales and dolphins means some species, including blue whales, spend little time at the surface. So despite their overwhelming size, they can be hard to find and tough to study.

Read more: My team uses crossbows and drones to collect bacteria from whales – and the results are teaching us how to keep whales healthy

That’s one reason we need to rely on drones. My research will use drones to collect video footage of humpback and pygmy blue whales in Australian waters. From this footage, we can extract still images to take measurements along the length and width of the whale.

These measurements will let us calculate the size and volume of a whale, and using this we can determine an individual’s body condition – an indication of its health. 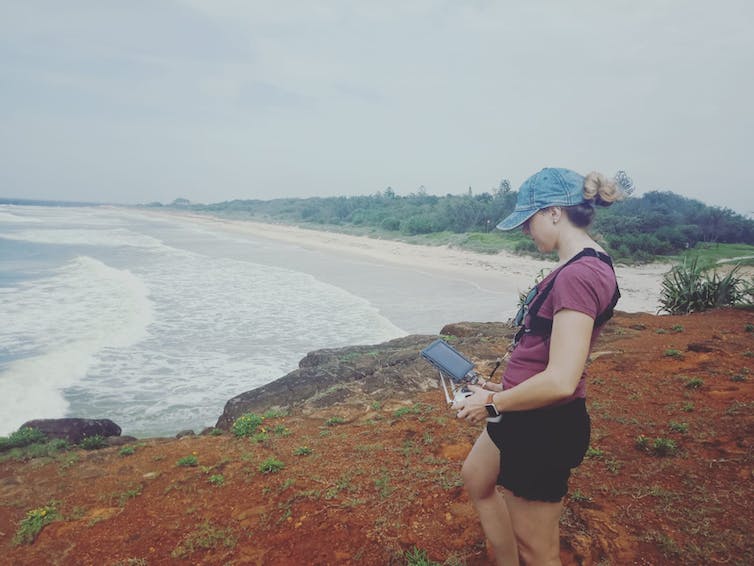 I use drones to find whales, then video them lying flat on the surface. Author provided

Advancements in drone technology have allowed them to be used in a variety of research projects, particularly in marine science, such as marine fauna abundance estimates, habitat use and behavioural studies. This is because drones are relatively cheap, accessible and easy to use.

Drones became a widely used marine scientific tool in 2015, and became more popular in 2018. Before then, researchers used manned aircraft to assess body condition from birds-eye view images of whales.

But manned aircraft can be expensive – think plane hire cost, fuel, pilot hire and airport fees – and pose extra risks to researchers on board.

The drones I’ll be using will be around 20 m above the water, capturing video footage of the whale for ten minutes.

But this can be tricky – whales are great swimmers and can move in all different directions, arching their back, rolling over or even twisting to one side. We need the whale lying flat near the surface of the water to measure it. 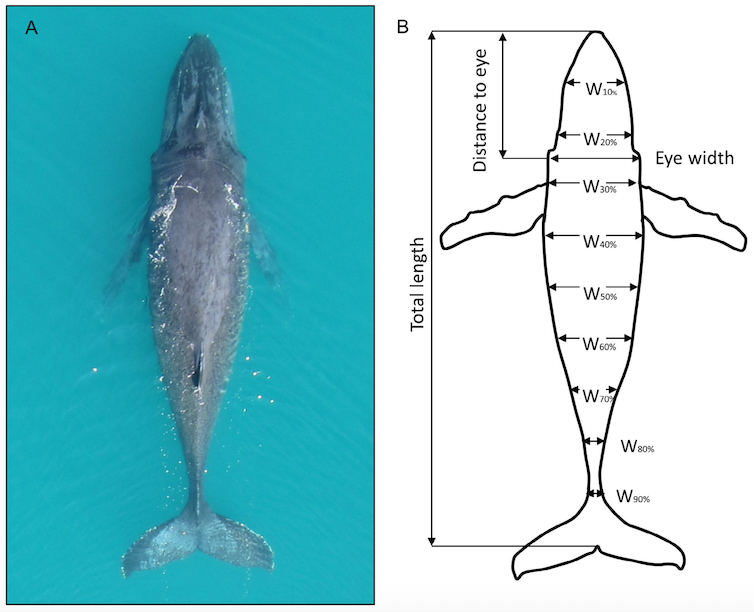 a) an example of an aerial photograph of a humpback whale using an unmanned aerial vehicle and b) the position of measurements taken to assess body condition (the diagram shows width taken at 10% increments for clarity only). [From Christiansen et al (2016)](https://esajournals.onlinelibrary.wiley.com/doi/pdf/10.1002/ecs2.1468), Author provided

Using a statistical software program, the focal length of the camera and the altitude of the drone, I can turn measurements of its total length from pixels to absolute metres.

From there, I can calculate its volume to determine whether it’s in good nick, comparing it to other whales from its population.

Read more: Australian sea lions are declining. Using drones to check their health can help us understand why

My research links the condition of a whale’s body to the timing of its migration. Understanding this relationship is important because it’ll hopefully increase our understanding about what trade-offs whales make during their migration.

Read more: Why are whales big, but not bigger?

For example, humpback whales rely on stored energy during their annual migration from their feeding grounds in Antarctica to their breeding grounds in the north west (Camden Sound) and eastern (Great Barrier Reef) waters of Australia. This means they don’t eat during this time. 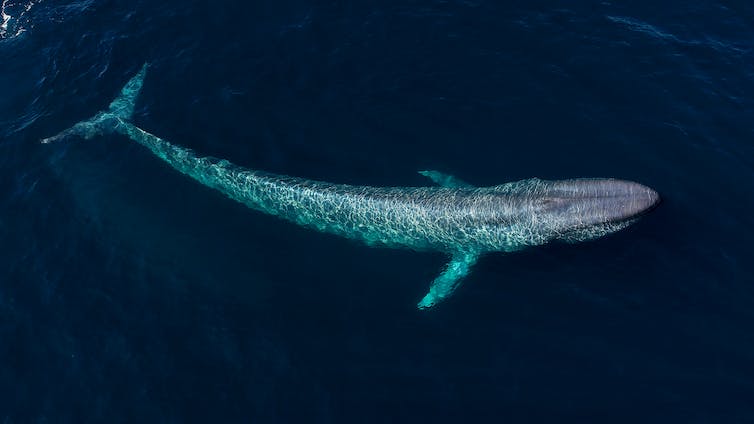 The blue whale is the largest animal known to exist on Earth. Shutterstock

So, their body condition will determine how long they can physically spend in these breeding grounds. In other words, the more energy stores they have, the more time they can go without feeding.

While on the breeding grounds, whales also compete for breeding opportunities and calving. The most energetically demanding of these is calving, as the energy a mother passes onto her calf will influence her calf’s growth rate and survival. 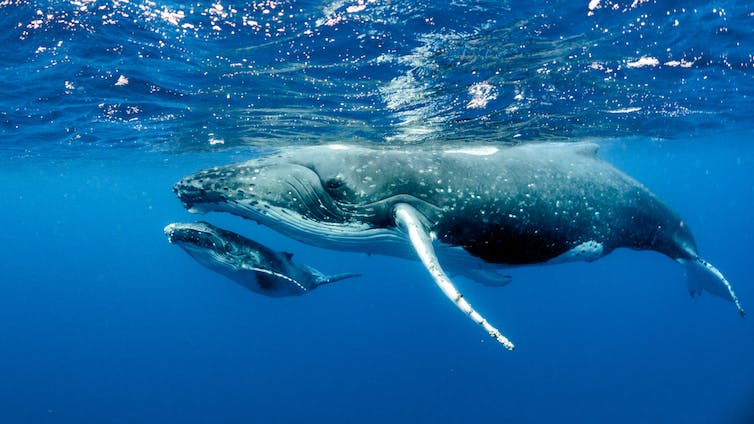 Calving demands the most energy from whales. Shutterstock

Humpback whale numbers have been bouncing back since commercial whaling for humpbacks in Australia stopped in 1963.

More globally, many whale populations, including blue whales, are slowly recovering since the International Whaling Commission moratorium on commercial whaling started in 1986. But climate change adds new, and possibly unknown, threats to whales.

Read more: Why Iceland is set to resume whaling despite international opposition

In particular, climate change – including changes in sea temperatures, ocean acidification, reduction in sea ice, primary productivity and changes to ocean currents – can threaten the main prey of whales: krill. 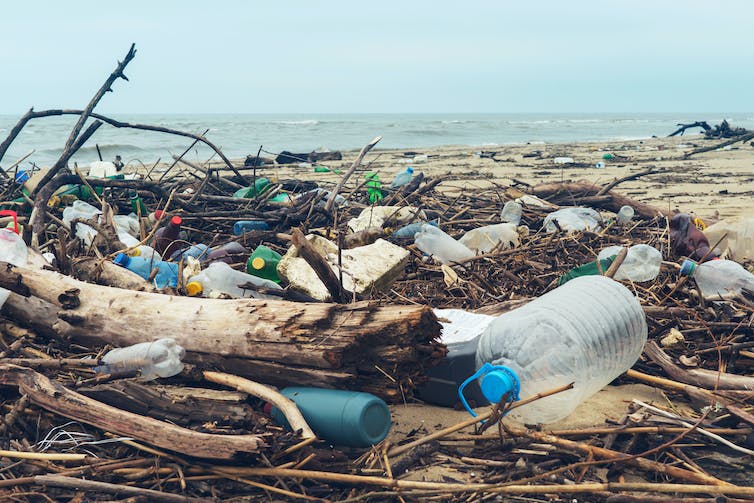 Human activity in the ocean and climate change can threaten whales. Shutterstock

Whales must consume large amounts of food per day to survive. And whales with reduced fat reserves have less chance of reproducing successfully. If their main food source is no longer there, they may not get enough food to make these long migrations, or to give enough energy to their calves for survival and growth.

Females may skip a reproductive cycle to ensure they have enough energy reserves for future pregnancy. Males may also spend less time on the breeding grounds if they don’t have sufficient energy reserves, decreasing their breeding opportunities.

Declining krill stock in the Southern Ocean plays a big role, but so do other stressors in their environment from shipping, oil and gas production, and other increased human activities in the ocean.

Read more: We need to understand the culture of whales so we can save them

So until we better understand these mysterious and enigmatic creatures, I’ll forgive the early morning starts. I’ll embrace the wind in my face and the salt in my hair, knowing the welfare of whales around the world is everyone’s responsibility.