A team of US and South African researchers has published highly detailed images of the largest X-shaped “radio galaxy” ever discovered – PKS 2014-55. 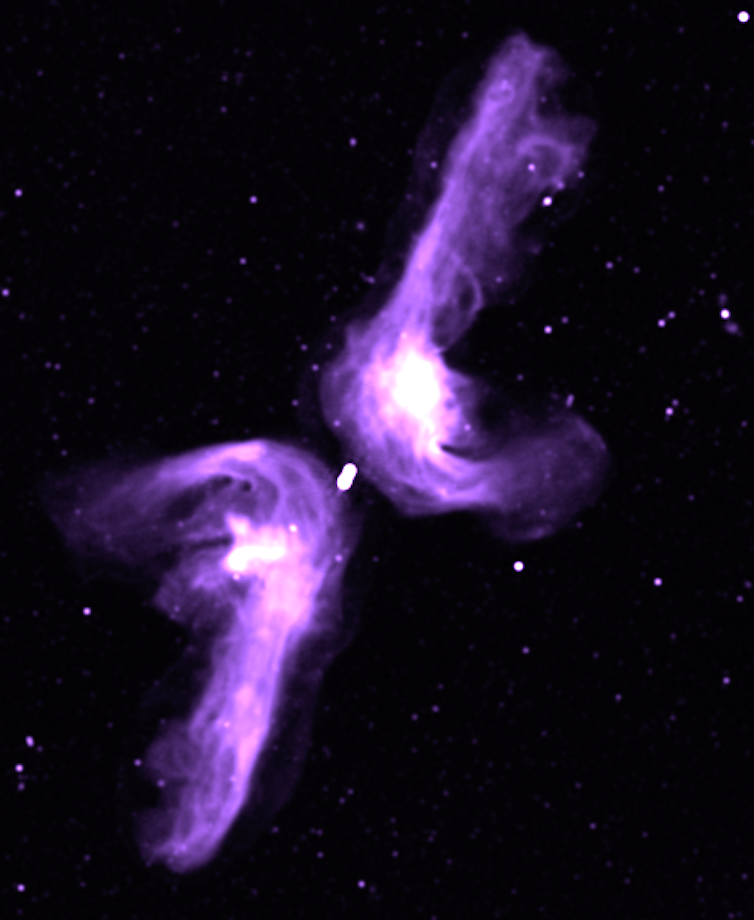 The spectacular new images were taken using the 64-antenna MeerKAT telescope in South Africa, by an international research team led by Bill Cotton of the US National Radio Astronomy Observatory.

Zooming in on a cosmic giant

Thanks to its innovative “radio cameras”, ASKAP can rapidly map very large areas of the sky to catalogue millions of objects emitting radio waves, from nearby supernova remnants to distant galaxies. 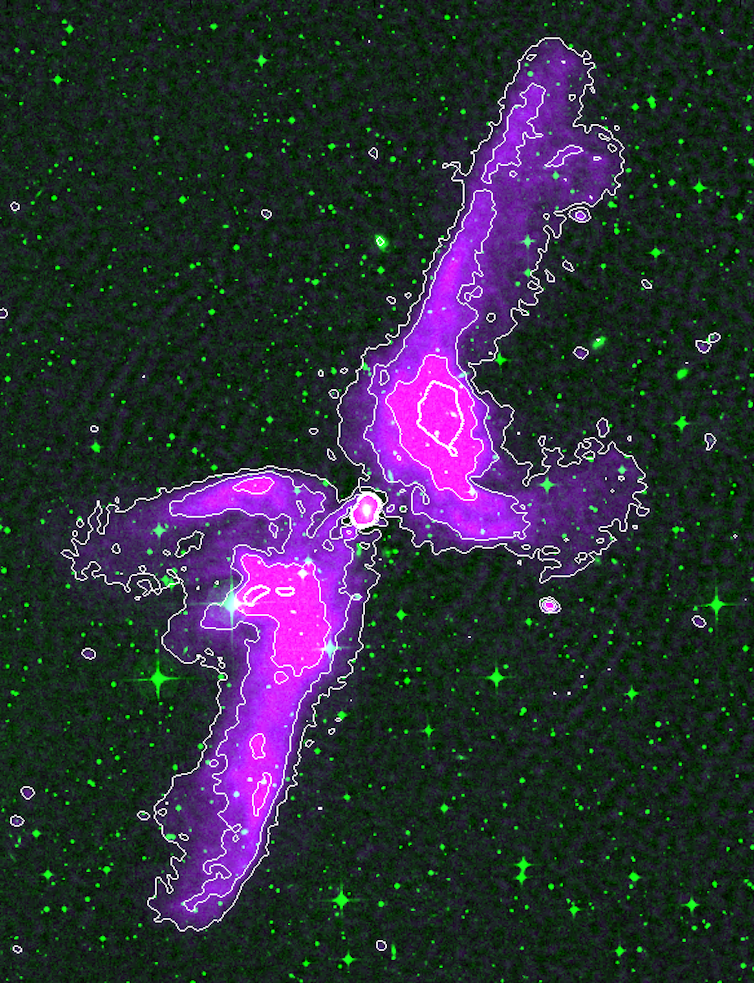 Our ASKAP image of the giant X-shaped radio galaxy PKS 2014-55. CSIRO and the EMU team/Author provided (no reuse).

The prominent X-shape of PKS 2014-55 is made up of two pairs of giant lobes consisting of hot jets of electrons. These jets spurt outwards from a supermassive black hole at the galaxy’s heart.

The lobes emit electromagnetic radiation in the form of radio waves, which can only be detected by radio telescopes like ASKAP. Humans can’t see radio waves. But if we could, from Earth PKS 2014-55 would look about the same size as the Moon.

Read more: What the universe looks like when viewed with radio eyes

What makes a radio galaxy?

Typically, radio galaxies have only one pair of lobes. One is a “jet” and the other a “counter-jet”.

These jets expand into the surrounding space at nearly the speed of light. They initially move in a straight line, but twist and bend into many marvellous shapes as they encounter their surroundings.

Centaurus A, seen below, is an example of a giant elliptical galaxy with two prominent radio lobes. 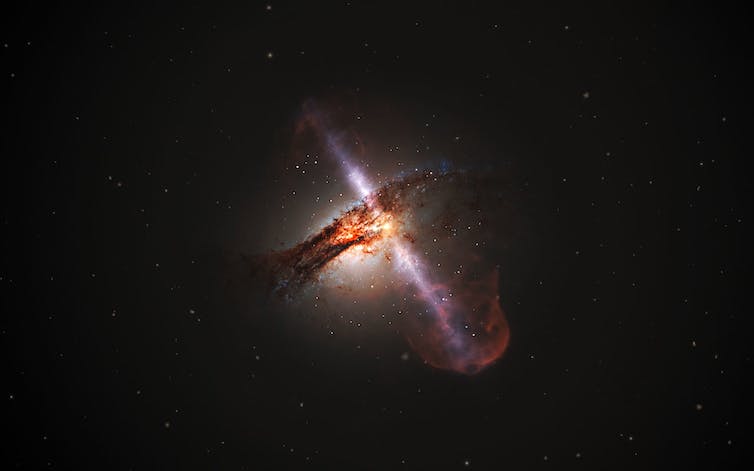 This image of the Centaurus A galaxy incorporates both optical and radio data. Every galaxy has a black hole at its centre, including the Milky Way. NASA Goddard Space Flight Centre/Flickr, CC BY

What makes the lobes?

Nearly all big galaxies have a supermassive black hole at their centre.

In an active galaxy, powerful jets of charged particles can emerge from the area around the supermassive black hole. Astronomers believe these are emitted from near the poles of the black hole, which is why there are two of them, and they usually point in opposite directions.

When the black hole’s activity stops, the jets stop growing and the material in them flows back towards the centre. Thus, what we see as one lobe of a radio galaxy is made up of both a jet spurting out, and the backflow material.

In the past, there were two major theories for why PKS 2014-55 has two pairs of lobes.

The first suggested there were actually two massive active black holes at the galaxy’s centre, each emitting two powerful jets.

The second theory suggested the supermassive black hole had undergone a spin flip. This is when a rotating black hole’s spin axis has a sudden change in orientation, resulting in a second pair of jets at a different angle from the first pair.

But the recent observations from the South African MeerKAT telescope strongly suggest a third possibility: that the two larger lobes are the fast-moving particles zooming out from the black hole, while the two smaller lobes are the backflow looping around to fall back in. 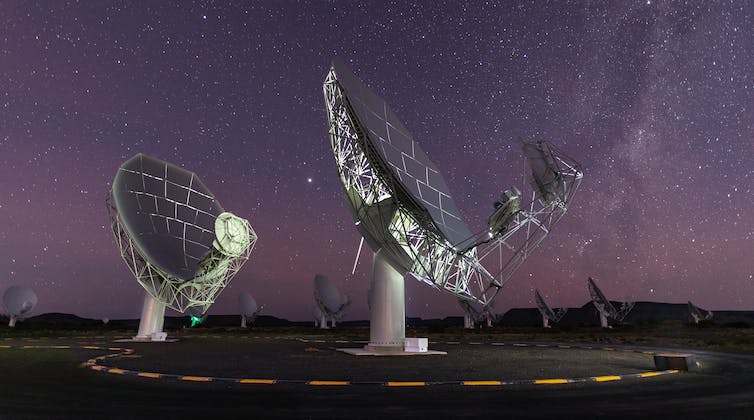 Using CSIRO’s ASKAP telescope, our team observed the “purple butterfly” of PKS 2014-55 to be an enormous cosmic structure. It spans at least five million light years – about 20 times the size of our own Milky Way galaxy.

PKS 2014-55 is located on the outskirts of a massive cluster of galaxies known as Abell 3667. It was discovered more than 60 years ago using the Mills Cross Telescope at CSIRO’s old Fleurs field station in New South Wales.

The galaxy’s first detailed radio picture was taken by Ron Ekers in 1969.

Read more: A brain transplant for one of Australia's top telescopes

The ASKAP telescope we used to capture PKS 2014-55 is an array of 36 radio dishes laid out in a pattern six kilometres in diameter. Together, the dishes make up a large radio telescope that uses Earth’s rotation to produce sharp images of astronomical sources near and far.

Each dish is 12m wide and equipped with new technologies developed by CSIRO and industry partners. ASKAP is a fast survey machine, taking radio images over very wide areas of the sky. Several surveys of the entire sky are expected to start next year.

We acknowledge the Wajarri Yamatji as the traditional owners of the Murchison Radio-astronomy Observatory site.