Reaction to the New Zealand government’s handling of the COVID-19 pandemic and resultant lockdown has ranged from high praise to criticism that its actions were illegal and its management chaotic.

Partly in response to the concerns, and to put the continued containment of the disease on a firmer legal footing, the COVID-19 Public Health Response Act was passed under urgency on May 14. It was quickly met with another wave of discontent.

National MP Michael Woodhouse likened Prime Minister Jacinda Ardern to “Muldoon with slogans”. Others recalled past abuses of police power such as the “dawn raids” of the 1970s.

Such commentary played on fears the new law was a lurch towards authoritarianism under cover of the pandemic – but how seriously should we take it?

Making the law fit for purpose

Although New Zealand’s response to the emergency has been praised at home and abroad, the government was working with a multi-generational legislative framework that needed adapting as the crisis evolved.

Read more: Experts are back in fashion – now more than ever we need to question them

At the core of that framework were the Civil Defence Emergency Management Act, the Epidemic Preparedness Act and the Health Act. Despite the relative success of the response, there were clearly ambiguities and weaknesses that could be improved once the emergency was over.

Laws covering public hygiene, vaccination, quarantine and greater integration of local communities (including Maori) in emergency planning will need refining. Longer term, this will be considered by select committees and may result in amendments to existing laws. 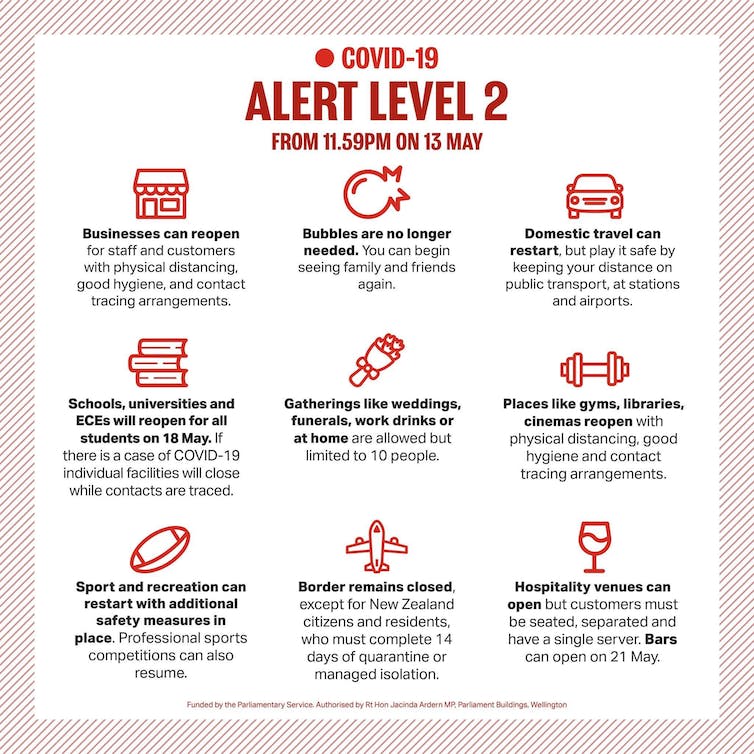 In the short term, however, the government decided as a matter of urgency to fast-track a new law to improve containment of the coronavirus. While the Epidemic Response Committee could have been expected to provide strong oversight, the bill became law without wider scrutiny.

Parliament later agreed to send the law to a select committee, but too late to stop the accusations of authoritarianism by stealth.

One COVID-19 law to rule them all

So what does this new law really do? Essentially, it will govern the country as we deal with all levels of the response to COVID-19. It supports “a public health response to COVID-19” that prevents and limits “the risk of, the outbreak or spread of COVID-19” in a way that is “co-ordinated, orderly, and proportionate” as well as “enforceable”.

Although the government has issued an alert level 2 order, it could equally issue new orders for level 3 or 4 under the new law if outbreaks return. Parliament has to approve all such orders within a short time, or they lapse.

Such orders can come from either the minister of health or the director-general of health. In some areas, the same orders could be given under the current Health Act. But the new law sets this out in easier language specifically tailored to the COVID-19 crisis.

Some provisions (such as those to do with contact tracing) are simplified from existing rules. Others, such as the power to direct businesses to close if they are operating in contravention of an order (such as not taking social distancing seriously), have a very contemporary feel.

Another improvement settles the rules on community checkpoints, one of the most controversial aspects of the recent lockdown. Without reiterating the existing power officials possess to close roads, public places and stop vehicles, the new law emphasises such actions can only be done by “a constable or an enforcement officer acting under the authority of the constable”.

The new law has also trimmed the powers of a constable (i.e. police) during the COVID-19 period (but these remain very wide under the Health Act). Anyone entering a place to ensure disease control rules are being followed must now report the entry and why it was necessary.

This reporting requirement did not exist before but it would have been better to limit this emergency power to the police alone, or only allow its operation when police are present.

There is a further questionable area: while it makes sense that orders can be issued when the existing Epidemic Preparedness Act or Civil Defence Emergency Management Act are in play, it is less clear why the prime minister can also make such orders. Those powers should only exist when an emergency is actually declared or in operation.

These concerns aside, perhaps the best feature of the new law is that it is destined to have a short life. It must be renewed every 90 days or it lapses, and it lapses for good after two years. By the time it gets a retrospective grilling from a select committee it will – hopefully like the disease itself – be due to disappear.

Given its context, and the improvements and safeguards the act provides, it’s hard to see it as evidence of the rise of authoritarian government.