Clinical trials are under way around the world, including in Australia, testing COVID-19 vaccines and treatments.

These clinical trials largely fall into two groups. With observational studies, researchers follow a group of people to see what happens to them. With experimental studies, people are assigned to treatments, then followed.

These study designs have come about from centuries of people trying out different ways of treating people.

Here are some of the key moments in the history of clinical trials that led to the type of trials we see today for COVID-19.

Read more: From the research lab to your doctor's office – here's what happens in phase 1, 2, 3 drug trials

One of the earliest observational studies occurred nearly 1,000 years ago in China. The 1061 Atlas of Materia Medica (Ben Cao Tu Jing) was compiled and edited by Song Su, a renowned scientist, administrator, diplomat and military strategist.

It documented a trial of ginseng:

[…] to evaluate the effect of genuine Shangdang ginseng, two persons were asked to run together. One was given the ginseng while the other ran without. After running for approximately three to five li [about 1,500-2,500 metres], the one without the ginseng developed severe shortness of breath, while the one who took the ginseng breathed evenly and smoothly. 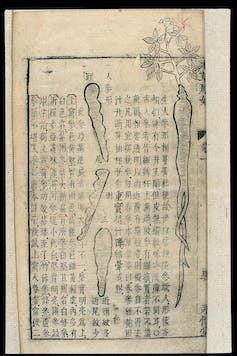 Ginseng has long been used to treat people, as documented in this 17th century text. Wellcome Collection, CC BY

This observational study is also the first recorded example of a control group.

Having a control group is one of the cornerstones of modern clinical trials.

An example of a control group in COVID-19 research is this recent study. People with diabetes hospitalised for COVID-19 were divided into those receiving the drug metformin and those not receiving it (the control group).

Back to ginseng. Today, it is a popular herbal remedy. As to whether it improves stamina, a recent review found some evidence ginseng might help men with erectile dysfunction. 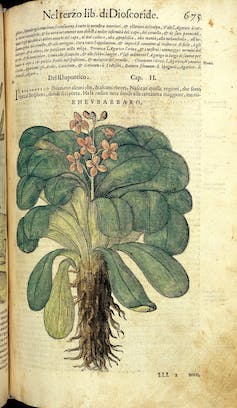 Rhubarb, seen in this 16th century text, has been used as a laxative for thousands of years. Wellcome Collection, CC BY

Rhubarb roots have been used as a laxative for more than 5,000 years, including in 18th-century England.

Caleb Parry, an English physician working in Bath, wanted to know whether locally grown rhubarb was as good as the more expensive Turkish variety.

In 1786, he ran a study in which he switched the type of rhubarb he gave to each patient at different times. He then compared each patient’s symptoms while eating each type of rhubarb. He concluded there was no advantage in using the Turkish version.

This is the first published example of a crossover trial (a study where the participants receive each treatment at different times).

Today, we know rhubarb roots and stems are rich in anthraquinones, which have a laxative effect.

Beriberi, a disease that can have lasting effects on the nervous system and heart, was common in Southeast Asia in the early part of the 20th century.

In 1905 a beriberi outbreak occured at the Kuala Lumpur Lunatic Asylum. At that time William Fletcher was the district surgeon. He realised the outbreak provided an excellent opportunity to run an experiment (which we now know is just a bit unethical).

Read more: Looking back on the chequered past of drug trials

At the end of the experiment, 15% of the patients who ate the white rice died of beriberi; none given brown rice died.

This is a very early example of randomisation in a clinical trial, where one group is chosen at random to receive a treatment.

Today we know beriberi is caused by a deficiency in thiamine (vitamin B1) and a white rice diet is deficient in thiamine.

Tuberculosis and the randomised controlled trial 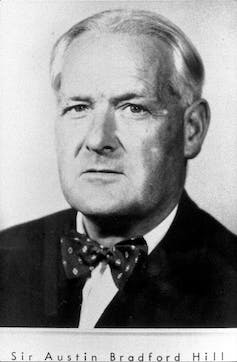 Sir Austin Bradford Hill, an English epidemiologist and statistician, conducted the first randomised controlled trial in 1948. The trial was to treat the lung disease tuberculosis.

Bradford Hill decided whether a patient should be treated with the antibiotic streptomycin plus bed rest, or bed rest alone, by using a table of random numbers.

The investigators didn’t know which patient got each treatment; details were in sealed envelopes. Patients were not told they were in a trial.

Using sealed envelopes is an example of what we now call allocation concealment. Making sure neither investigators nor patients know which treatment they are receiving is called blinding. These are now standard features of randomised controlled trials.

Randomised controlled trials are the “gold standard” of clinical trial designs, due to the use of both a control group and randomisation.

Decades later, researchers have used a randomised controlled trial to test the drug ruxolitinib in patients with severe COVID-19.

So, although Bradford Hill conducted the first randomised controlled trial, it was based on hundreds of years of people working out why things like a control group and randomisation are so important.