Scott Morrison wants to overhaul the skills workforce to ensure a better post-COVID-19 recovery. But there may not be enough people with the necessary skills to do so. And travel restrictions, which will reduce migration, will only compound the issue.

A Productivity Commission interim report released today found the proportion of people without qualifications at a Certificate 3 level or above decreased from 47.1% in 2009 to 37.5% in 2019. This will not be enough to meet a Council of Australian Governments (COAG) target of 23.6% set for 2020.

The report also found while the number of higher-level qualifications (diplomas and advanced diplomas) sharply increased between 2009 and 2012, it has since fallen to its 2009 level.

The 2020 target was set out in the 2012 National Agreement for Skills and Workforce Development (NASWD), which identified long-term federal and state objectives in skills and workforce development.

The report noted the skills agreement is no longer fit for purpose, and the A$6.1 billion governments spend annually on vocational education and training can be better allocated to improve outcomes.

What the report found

The National Agreement for Skills and Workforce Development was intended to significantly lift the skills of the Australian workforce and improve participation in training, especially by students facing disadvantage. Several targets, performance indicators and outcomes were agreed to.

The commissioners admit some of the targets agreed to were arbitrary and ambitious.

If targets are unattainable, they quickly become irrelevant for policymakers. The NASWD’s performance indicators were reasonable general measures but needed to be linked to specific policies to allow governments to monitor progress. 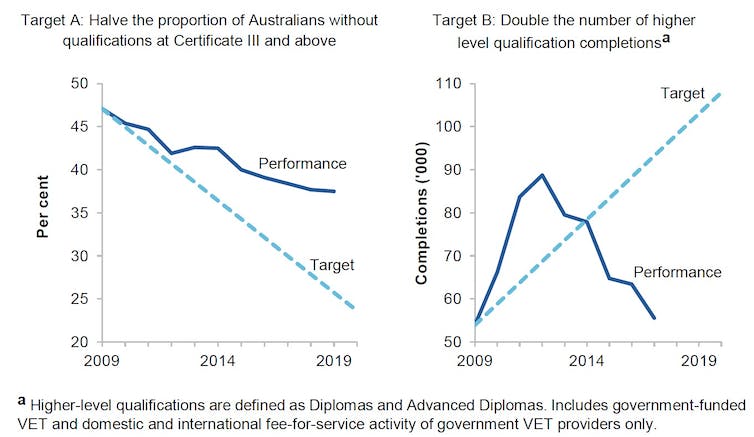 The NASWD’s targets will not be met.

The commissioners state the failure to meet the targets is not an indication the national agreement has failed overall. This is because the targets only looked at those with formal education.

Read more: Most young people who do VET after school are in full-time work by the age of 25

About 85% of workers’ non-formal learning is paid for by employers, but government policies are largely silent about this kind of training.

Noting these caveats, the report identified factors that contributed to the failure to meet the targets. These included:

The fall in VET participation also coincided with an increase in university enrolments. This suggests students were choosing university over VET. VET and traineeship funding also tightened from 2014.

What the report recommends

Treasurer Josh Freydenberg asked the Productivity Commission to undertake the review of the National Agreement for Skills and Workforce Development in November 2019, before the bushfires and COVID-19 hit the economy.

The request came a few months after former New Zealand skills minister Steven Joyce released a report and recommendations of his review of Australia’s VET system.

The findings of the Productivity Commission’s interim report appear to dovetail well with those of the Joyce review. This recommended the formation of the National Skills Commission, which can facilitate an overarching national and consistent approach to vocational education and training.

Read more: The government keeps talking about revamping VET – but is it actually doing it?

The interim report’s main recommendation is for governments to consider reforms to make the VET system a more efficient, competitive market. This must be driven by informed choices of students and employers, with the flexibility to deliver a broad suite of training options.

The commissioners also advocate for the use of common methods of measurement among states and territories to achieve nationally consistent VET funding and pricing.

For example, one of the most popular VET courses in Australia is the Certificate 3 in individual support — the course you’d study to work in aged or disability care. Standard subsidies for this course vary by as much as A$3,700 across Australia.

The report calls for more submissions and consultation as part of the next phase of the review.

The initial assumption of the commissioners was that the changing nature of work largely driven by new technology would be the main driver of changes to VET requirements.

But given the disruptions to the economy, and learning delivery having moved online, the commissioners note that while their current options and recommendations are unlikely to change in the general sense, COVID-19 is probably driving longer-term changes to the economy.

They say the pandemic may lead to structural changes in the VET sector which will also be relevant to any future agreements between governments.