The recent release of global university rankings and the way these are reported raises important questions about the role and reputation of our tertiary institutions.

Are universities measured and ranked according to what we really value? Or are they ranked and valued only by what is measured? And are those measures authentic and trusted indicators of quality?

There was a time when no one feared that a university might slip a quality ranking or two in the eyes of the world, the taxpayer, benefactors or students considering domestic or international study. Nowadays, however, universities see no limit to the black hole of global rankings. Its gravitational pull consumes their attention.

While a modern phenomenon, rankings have historical origins. The birth of the modern research-intensive university can be traced to Western Europe in 1665 when the first academic journals appeared. In Germany, more than 3,000 journals were published between 1665 and 1790, marking an institutional move from the teaching university to the research university.

Academics were able to share and legitimise their research by publishing in these journals. Students who were called on to write and defend their essays orally could draw on the journals to support their learning.

Read more: University students aren't cogs in a market. They need more than a narrow focus on 'skills'

There is no one ranking standard

Today’s journals and the number of citations academics can claim in them are key indicators of a university’s rank and quality. However, when a university has to research and teach in a language other than English, the effect on its ranking can be drastic.

Databases used by the larger university ranking systems, such as Scopus and CSI/SSCI, don’t automatically pick up non-English journals. Opportunities for researchers to gain “ranking points” through peer citations are therefore reduced. 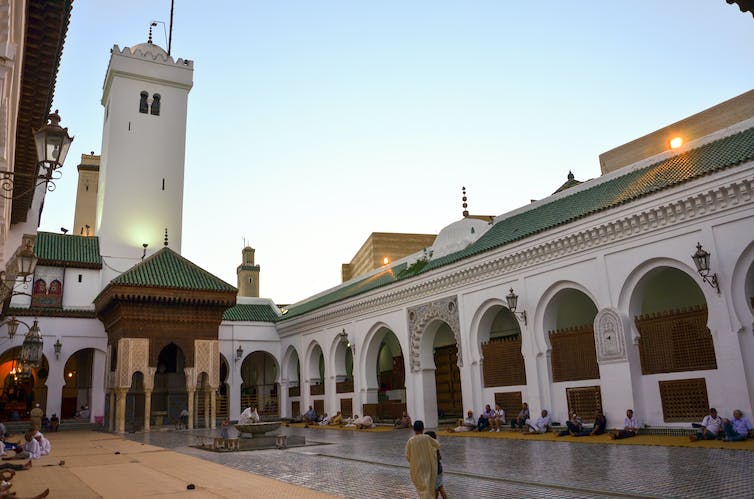 The University of al-Qarawiyyin in Morocco, the oldest operating institution in the world. Shutterstock

The systems are far from simple and universities increasingly invest in experts to advise on how to improve and maintain ranking scores, especially as more universities crowd the global ranking field.

If we are to accept this imperative to measure and rank universities by academic reputation, publishing record, teaching and research intensity, then we need to ask another question: what other indicators of quality and value might be included?

While online programs have often been considered inferior to “live” learning, for instance, the impact of COVID-19 has forced us to reconsider. There is now broader awareness of the opportunities online teaching opens up – including its positive impact on universities’ carbon footprints.

In fact, the THE rankings tracked progress towards the UN’s Sustainable Development Goals for the first time in 2019. One example of such sustainable activity is Goldsmiths College at the University of London, which banned the sale of beef on campus. 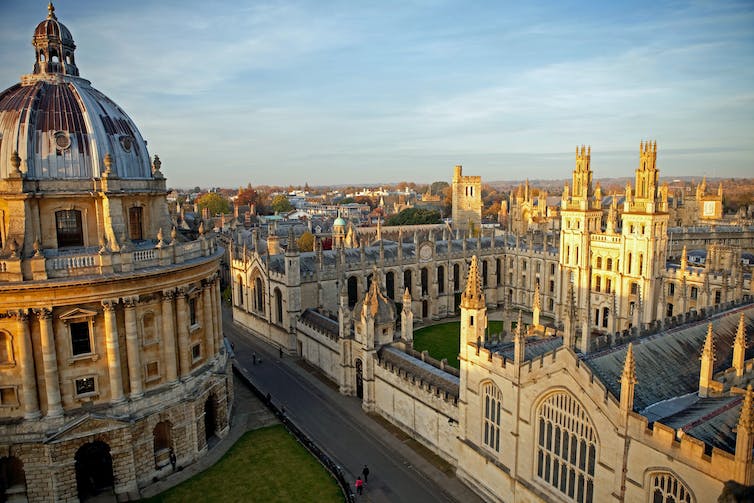 Oxford University: ‘The Lord is my light’ Shutterstock

How do you measure intangible value?

Taking an even broader view, might we consider the spiritual dimension of higher education? The university has long been valued for its divine contribution: Oxford University’s motto has been “Dominus illuminatio mea” (the Lord is my light) for at least 200 years. “O my Lord. Advance me in Knowledge” is the motto of the University of Karachi.

This marriage of the sacred and the scientific has been a theme since the founding of the University of al-Qarawiyyin in 859 AD in Morocco. It’s said to be the oldest continually operating higher educational institution in the world.

In the rush to measure quantifiable indicators of output have we obscured these less tangible forms of value?

Read more: COVID-19: what Australian universities can do to recover from the loss of international student fees

If COVID-19 taught us anything, it was the value of communication and connection (sometimes called connectivism). In fact, experts from universities came to the fore as rarely before. Rather than handing more influence to PR and social media experts, might this be an opportunity to re-create the university as the place for exchanging ideas, teaching and research?

Maybe we should look back to the House of Wisdom (بيت الحكمة‎), founded in Baghdad in 786 CE, where scholars met daily to translate, discuss and write in many languages: Arabic, Farsi, Hebrew, Aramaic, Syriac, Greek and Latin. Aristotle’s work was famously translated from Greek. So too the work of the physician Hippocrates.

What hadn’t been accessible was made accessible and shared. The “West” benefited from this knowledge from the East, laying the foundations for the Renaissance.

This was a true academy of the arts and sciences, valued not for its citations, number of Nobel Prize winners or the ratio of doctorates to bachelor degrees, but for the exchange of knowledge and ideas. One wonders how this global multilingual forerunner of a quality modern university might fare under our ranking regime.

By reaching back in history we might recover those other measures of quality and value that formed the foundations upon which modern universities are built. The adage that “if everything is to be as before, then all must change” rings true. How we value and rank the exchange of knowledge and ideas will once again become something worth striving for.