As of this morning, ten “hot spot” postcodes in Melbourne’s suburbs have gone back into Stage 3 coronavirus lockdown.

In these suburbs, stay-at-home restrictions will be enforced by police patrols, “booze bus”-style barriers and random checks in transport corridors. In what Premier Daniel Andrews described as “extraordinary steps”, people moving in and out of these suburbs will be asked by police to identify themselves and provide one of four valid reasons for being out. Otherwise, they could face fines.

It seems likely that ever-more restrictive public health measures will be adopted should the coronavirus outbreak continue to worsen. With measures to protect public health competing with individual rights in what appears to be a zero-sum game, there are legitimate questions about how far the government can go before it reaches the outer limits of the law.

Read more: Coronavirus spike: why getting people to follow restrictions is harder the second time around

In two suburbs of Melbourne, over 900 people have refused to be tested for coronavirus. The reasons vary, but include people being concerned about having to self-isolate and not understanding the dangers of the virus, as well as privacy reasons.

These refusals aren’t explicitly linked to increased transmission rates, but some disgruntled residents in locked-down suburbs and others have called for compulsory testing.

Existing laws already enable compulsory testing, but they have not yet been used. The March declaration of a human biosecurity emergency under the Biosecurity Act empowers the health minister to issue directions considered necessary to prevent or control the spread of coronavirus.

Under the act, these powers must not be used in a manner that is more restrictive and intrusive than necessary. However, there are few other obvious limits on these powers. 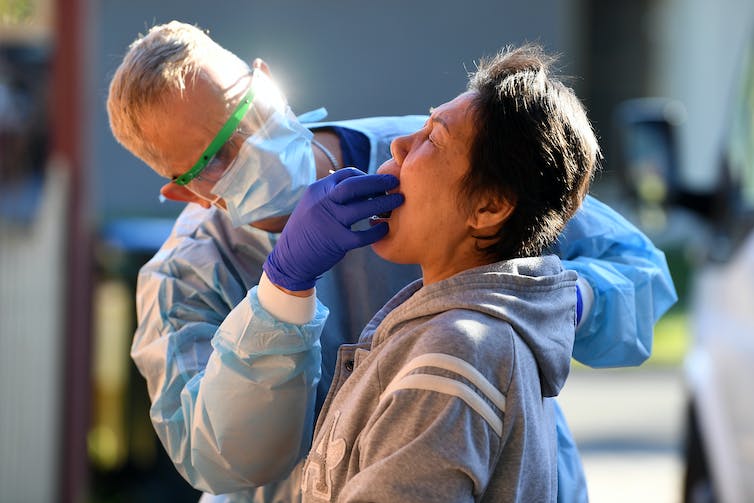 Door-to-door testing is now under way in parts of suburban Melbourne. James Ross/AAP

The Victoria Public Health and Wellbeing Act 2008 gives the chief health officer the power to compel a person to take a test. To use this power, the officer must believe the person either

Unlike the Commonwealth Biosecurity Act, this power seems constrained to being used as a measure of last resort. The Victorian act refers to the consideration of alternatives and a preference for the

measure which is the least restrictive of the rights of the person.

Such orders could be reviewed or challenged in the courts, but more practical challenges, including the need to have police present when conducting compulsory testing, may explain why this measure has not yet been used.

In the state of emergency currently in force in Victoria, the chief health officer also has the power to detain or restrict the movement of any person for as long as necessary to eliminate or reduce a serious risk to public health.

The hotel quarantine program relies on this power. While the chief health officer must review the need for the continued detention of people at least once every 24 hours, there are no other obvious limits on this power.

In practice, international travellers entering Victoria receive notices imposing a 14-day quarantine with permission to leave their hotel rooms only for medical care, where it is reasonably necessary for physical or mental health, on compassionate grounds, or if there is an emergency.

Read more: Explainer: what are the Australian government's powers to quarantine people in a coronavirus outbreak?

The quarantine program in Victoria has been a clear failure, due to the alleged breaches of public health protocols.

An independent inquiry into the program is being conducted by retired judge Jennifer Coate, and Corrections Victoria will take over supervision of the program from the private security contractors who had been running it.

It is possible the newly appointed authorities - with prior experience managing prisoners - may adopt a more restrictive approach.

People detained under the new regime may find it more difficult, for example, to get permission to leave their rooms for supervised outdoor exercise. If this approach is disproportionate to the health risk, and causes or contributes to a person’s ill health, court action may ensue.

Public authorities responsible for the management of people in quarantine must balance their role mitigating public health risks with their duty to protect the human rights of those in their care and custody.

In a civil society, fundamental freedoms and individual liberties are highly valued, and intrusive powers should be used only where necessary. In a state of emergency, some limitations of rights may be necessary, but any such limitation must be necessary, justifiable, proportionate and time-bound.

Unless it is overridden by parliament, the Victorian Charter of Human Rights and Responsibilities Act 2006 continues to apply during a state of emergency. Although no charter rights are absolute, this act has been used successfully by people challenging the conditions of their detention.

Governments across Australia have extraordinary emergency powers at their disposal, and have been prepared to use many of them in response to the pandemic. Although the courts have considered the impact of coronavirus on existing laws and procedures – such as the right to protest in the face of social-distancing measures and increased risks to the health of prisoners – they have yet to scrutinise some of the key public health measures adopted.

Despite the deference of courts to public health measures in the face of a deadly infectious disease, there are limits, and it seems inevitable that some limits will eventually be reached. 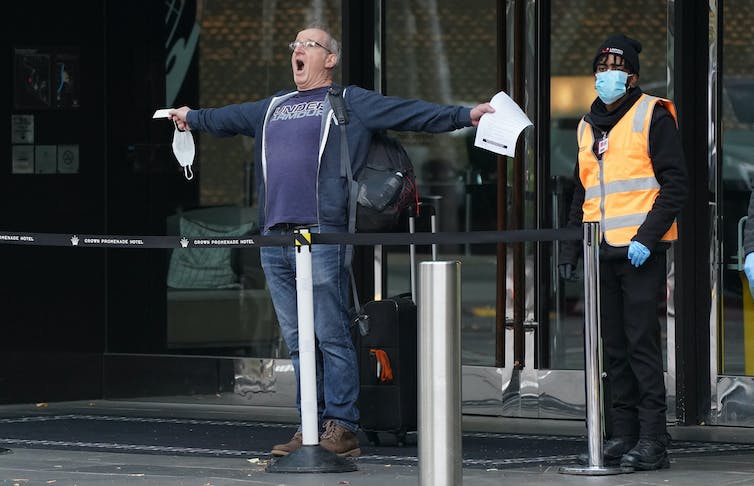 Returning overseas travellers have been forced to quarantine in hotels since early in the pandemic. Scott Barbour/AAP

There are also limits to the effectiveness of these measures when people perceive them as unfair.

People obey laws and comply with rules when they see them as legitimate, not because they fear punishment. If the rules are unclear, or the process of developing them poorly explained, they may feel like postcode lottery to residents. This, in turn, could bring more dissatisfaction with lockdown measures and fail to effect behaviour change.

During times of emergency, it is critical powers with the potential to limit human rights and deprive people of liberty are properly communicated to the community and used with restraint.

This is not only important for the protection of individual rights, but also to prevent lasting damage to the rule of law. Ensuring that respect for human rights remains a central concern of government responses to the pandemic will build confidence and resilience in our communities and our institutions as we emerge from the crisis.