This article is a preview of Flora, Fauna, Fire, a multimedia project launching on Monday July 13. The project tracks the recovery of Australia’s native plants and animals after last summer’s bushfire tragedy. Sign up to The Conversation’s newsletter for updates.

In late summer, male northern corroboree frogs call for a female mate. It’s a good time to survey their numbers: simply call out “Hey, frog!” in a low, deep voice and the males call back.

This year, the survey was vital. Bushfires had torn through the habitat of the critically endangered species. We urgently needed to know how many survived.

In late February we trekked into Kosciuszko National Park, through a landscape left charred by the ferocious Dunns Road fire.

We surveyed the scene, calling out: “Hey, frog!”. At ponds not severely burnt, reasonable numbers of northern corroboree frogs responded. At badly burnt sites where frogs had been found for 20 years, we were met with silence. The adults there had likely died.

After completing our surveys we collected melted cameras we’d deployed eight months earlier to monitor water levels in the ponds. Some weeks later, these would reveal just what the frogs had endured. 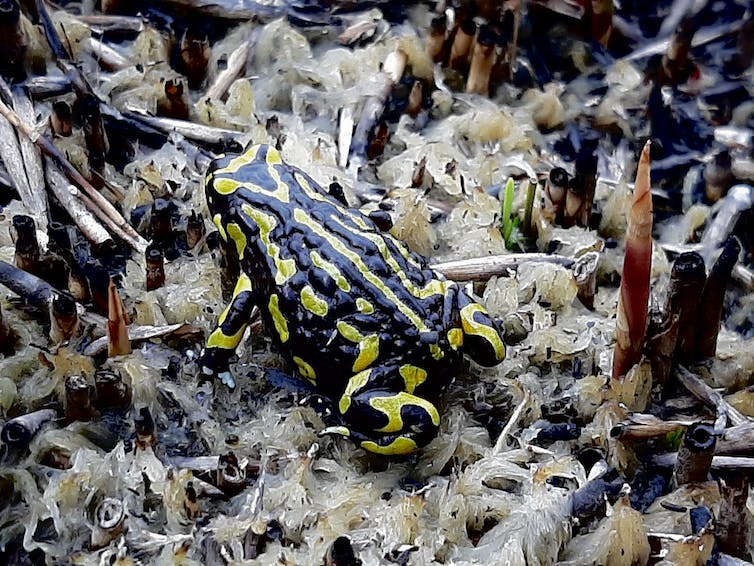 A tiny frog with a big problem

They’re found only in the high country of southern New South Wales and the ACT. Before last summer’s bushfires, just a few thousand northern corroboree frogs were thought to remain in the wild. Our preliminary post-fire assessment indicates a substantial number might have died where fires were severe.

Of the frogs’ two key habitat areas in NSW, one was burnt by the fires and one was left untouched. Over the border in the ACT, the fire damage was relatively slight, but the worst came later. 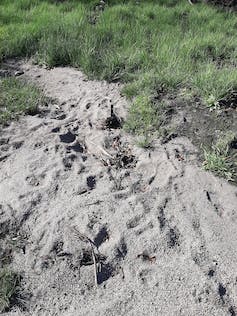 Heavy rain after the fires filled ponds with ash and sediment. Ben Scheele

After the fires, heavy rain in denuded burnt catchments produced water runoff laden with sediment. Some frog breeding habitat was eroded and filled with silt and ash. Once-mossy ponds were now gravel and ash.

In March 2019, we’d set up cameras to take one photograph a day, to monitor water levels in ponds. The fires melted the cameras, and some were also waterlogged. One of the authors, Ben Scheele, took them home and left them in his garage, assuming the footage was lost.

But several weeks later, bored during the COVID-19 lockdowns, he chiselled open the warped casing and removed the memory cards. Amazingly, most still worked.

They contained a fascinating series of photos. Some revealed how a number of ponds largely escaped the fires, only to be destroyed afterwards by flooding.

The series below shows a pond in Kosciuszko National Park. Watch the transition from autumn to deep winter snow, then to dry earth before the fire and its smoky aftermath (when the camera had fallen to the ground):

Australia is home to around 240 frog species, most found nowhere else in the world.

The expert panel advising the federal government on bushfire recovery has identified 16 frog species likely to be severely affected by last summer’s fires.

All but one was listed as threatened by the IUCN prior to the fires. Importantly, the panel noted not much is known about how Australian frogs respond to fire.

Many Australian frog species have adapted to survive fire. But last summer, fires tore through areas where such events are extremely rare.

This includes World Heritage rainforests in northern NSW, home to the mountain frog, found nowhere else on Earth. How these frogs will respond to the fires remains to be seen.

For species associated with streams, such as the Barred River frogs, the impacts of fire may not be immediately apparent. Males typically stay near streams and may have escaped the flames, but females spend much time away from streams and may have died. These frogs are long-lived, so it may be many years before population declines are detected. 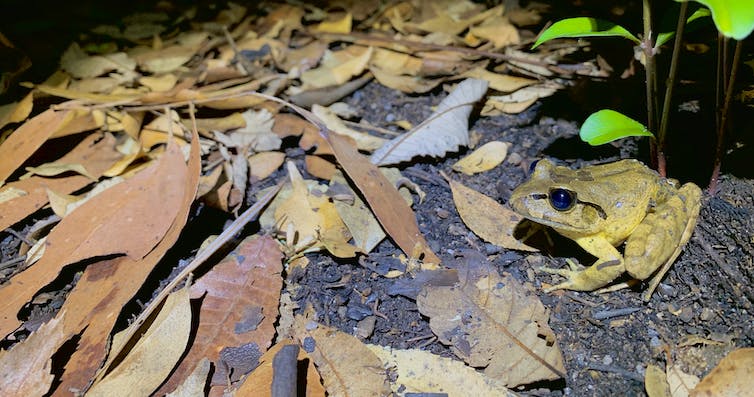 The effects of last summer’s fires on frogs are likely to be felt for years to come. For example, regrowing forests use lots of water, which will affect species in forested areas such as the northern corroboree frogs. This compounds a trend towards less rainfall under climate change, which is already driving their decline.

Annual northern corroboree frog monitoring conducted under the NSW government’s Saving Our Species program has been in place since 1998. This, coupled with the fact about half the known sites were fire-affected, puts us in a good position to better understand the species’ responses to fire by comparing burnt and unburnt sites in coming years.

The NSW government’s Saving Our Species program, and Taronga Conservation Society Australia, have started work on a captive “assurance” population for the species. The project, supported by Commonwealth funding, involves collecting eggs from the wild to safeguard the species’ unique genetic diversity.

Ongoing monitoring of other frog species is also critical. Importantly, anyone can get involved in helping understand frog responses to fire through the FrogID app.

Habitat degradation, climate change and disease threaten frogs globally. In this, they have much in common with humans. Last summer’s severe fires were a direct result of climate change. And of course, COVID-19 has killed more than 500,000 people in recent months.

Perhaps humanity should reflect on the fate we share with wildlife, and act.

David Hunter of the NSW Department of Planning, Industry and Environment contributed to this article.