If you ventured to the New York seaside in summer, you might see a large dome-shaped animal with a spiky tail, slowly moving towards the water. These are horseshoe crabs – the animals time forgot.

Fossil records for horseshoe crabs extend back about 480 million years. This is well over 200 million years before the dinosaurs.

Read more: A giant species of trilobite inhabited Australian waters half a billion years ago

More recently, horseshoe crabs have greatly helped advance modern medicine. Their blood is used to identify endotoxins in solutions. These are toxins found in bacteria, so anyone who has had an injection or surgery has been kept safe from dangerous toxins thanks to these creatures.

Unfortunately, the harvesting of their blood for this purpose is one reason horseshoe crabs are becoming an endangered group. Our research published today in Frontiers in Earth Science will hopefully aid conservation efforts to protect these enigmatic creatures. 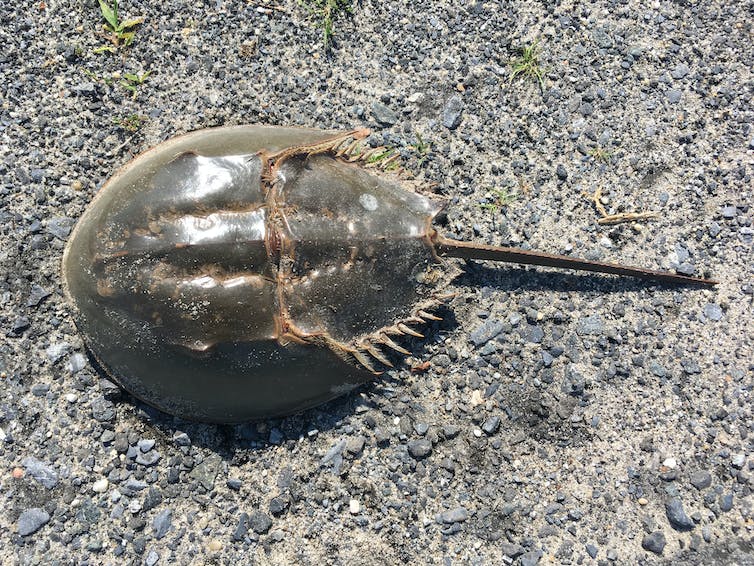 Completely harmless, but spiky like a cactus, horseshoe crabs are not actually crabs. They don’t have the antennae or jaws their crustacean cousins do, and have additional pairs of legs (13 in total). In fact, they’re more closely related to spiders and scorpions than crabs.

Defined within their own order, Xiphosura, these animals are characterised by a horseshoe-shaped head section, a roundish hexagonal backside and a long tail. They are, in essence, a spider in a suit of armour that can swim upside down.

Horseshoe crabs have been used in medicine for at least the past 40 years. Their endotoxin-revealing blood is blue and copper-based (unlike our red, iron-based blood).

Read more: Blood in your veins is not blue – here's why it's always red

A chemical refined from their blood can be used to identify contaminants in medical equipment that is inserted into humans.

Blue blood is used to make sure injections, IV drips, and any implanted medical devices are safe for human use.

However, to access this natural medicinal miracle, humans must collect horseshoe crabs and harvest their blood. While blood loss itself may not be the main cause of death, other factors such as capture and transport can impact group survival.

At present, with improved practices, between 6-15.4% of horseshoe crabs die from harvesting.

This process represents one of the main threats to them today, even though a synthetic substitute for blue blood has been available for nearly two decades. However, there is uncertainty around the efficacy of this alternative, so horseshoe crabs are still harvested.

As a result, two of the four living species – the Chinese horseshoe crab and American horseshoe crab (also called the Atlantic horseshoe crab) – have been placed on the International Union for Conservation of Nature’s vulnerable and endangered species list.

Apart from bloodletting for biomedical use, other threats facing horseshoe crabs include overharvesting, human interaction and serious habitat modification.

Fantastic beasts, and where to find them (online)

To help raise awareness about the challenges horseshoe crabs face, we created an atlas of all fossil and living Xiphosura. This free, open access collection contains photos of every horseshoe crab species ever described in the group’s 480-million-year history.

Alongside the photos, we provide outlines of how the four living species survived until now.

Building this atlas took three years. It involved emailing more than 100 researchers and museum managers, and even travelling from Australia to England, Germany, Russia, Slovenia and the United States to collect photographs.

The result is an example of every single horseshoe crab species ever documented, living or extinct – more than 110 in total.

The ‘living fossil’ that roamed with dinosaurs

Our atlas can help highlight the unique and complex evolutionary history of horseshoe crabs.

These arthropods (invertebrates with an exoskeleton and jointed legs) survived all mass extinctions. Some have changed in appearance through time. For example, we have completely bizarre fossil forms, such as Austrolimulus – essentially a pick-axe in horseshoe crab form. 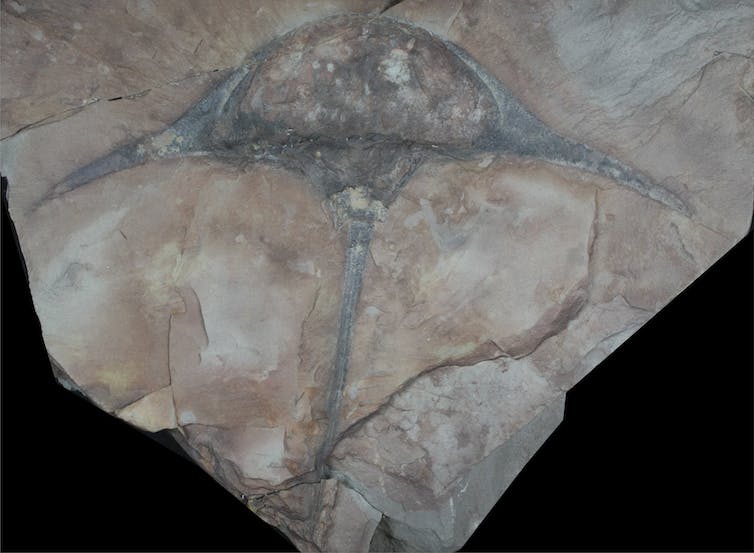 However, some fossil species look very similar to modern ones. 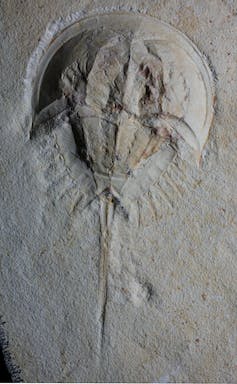 Compare the Jurassic-aged fossil Mesolimulus, found in Solnhofen Limestone in Germany, to American horseshoe crabs walking along the North American coast today. They are practically the same.

Apart from size differences, horseshoes crabs have changed very little over the past 150 million years or so, earning them the moniker “living fossils”. But while specimens in the fossil record are between 3-30cm long, horseshoe crabs today can grow to more than 80cm.

Expanding our collective knowledge could help fuel future conservation efforts. Let’s prevent these unique icons of a bygone era from passing into the annals of history.