I’m standing on a hill in Kangaroo Island’s Western River Wilderness Protection Area, looking over steep gullies and sweeping hillsides. As far as I can see, the landscape is burnt: bright patches of regrowth contrast with skeletal, blackened trunks. It’s stark, yet strangely beautiful.

It’s late May, five months after the catastrophic summer fires burned 90% of the park. I’m here to assess the damage to some of our tiniest Australians.

Much attention has been given to the plight of Kangaroo Island’s iconic birds and mammals – the Glossy Black Cockatoo and the Kangaroo Island Dunnart, for example. However, the invertebrates – spiders, insects and myriad other groups – have largely been overlooked. These groups contain some of Australia’s most threatened species.

Among the invertebrates listed by the federal government as a priority for intervention is an unassuming, brownish-black spider with squat legs and a body about the size of a A$2 coin. Its name: the Kangaroo Island Micro-trapdoor spider (Moggridgea rainbowi).

The trials it now faces offer an insight into the enormous challenges ahead for invertebrates – the tiny engines of Australia’s biodiversity – in the wake of last summer’s cataclysmic fires. 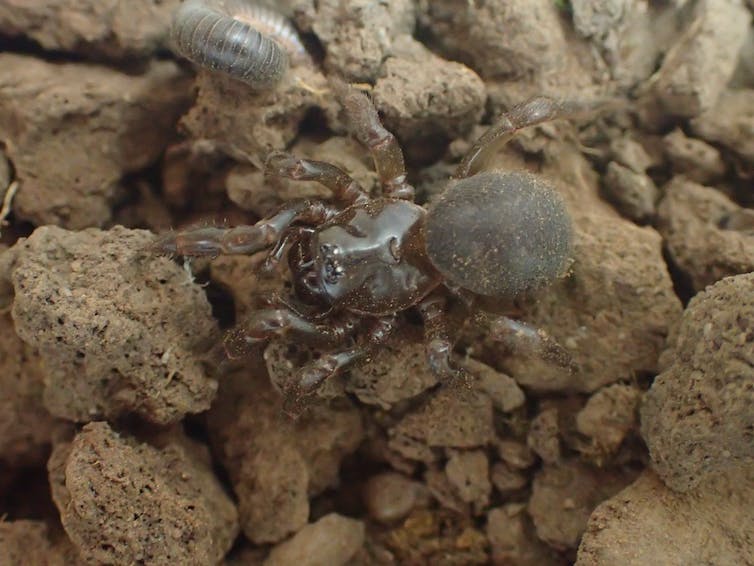 The Kangaroo Island Micro-trapdoor spider has an interesting history. It is the only member of its genus found in Australia, its closest relative being in Africa. Studies show it arrived here between 2 and 16 million years ago, likely rafting across the ocean on vegetation! A true voyager.

Kangaroo Island Micro-trapdoor spiders exist only on Kangaroo Island. They live in short, 6cm burrows, built neatly into creek banks. They are slow, calm spiders, spending most of their time in their burrow, determinedly holding the door shut with their fangs.

The females care for their young; I have opened a trapdoor to find 20 tiny spiders living together with their mother. When ready, the young disperse short distances to build burrows of their own, tiny versions of the adult’s. 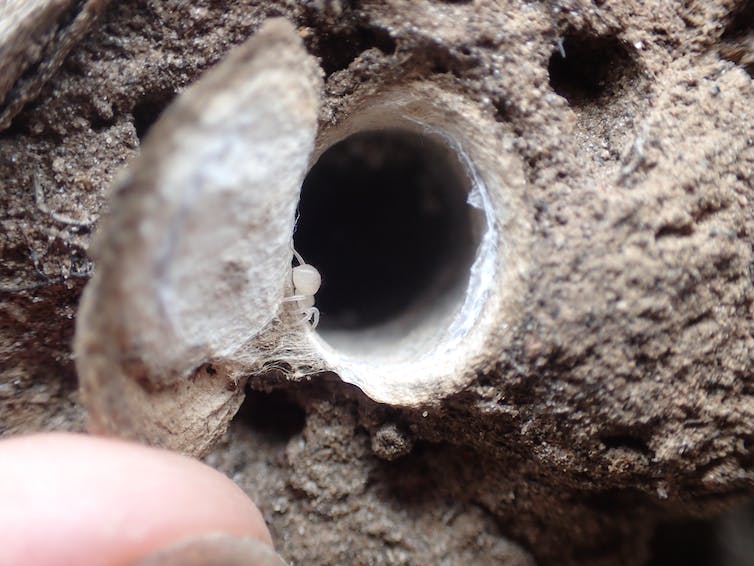 When ready, young Kangaroo Island Micro-trapdoor spiders build their own burrows not far from their mothers’. Jess Marsh, Author provided

My colleagues and I are in this conservation park today to locate patches of less fiercely burnt land in which to look for survivors. Sadly, all the known western populations of this enigmatic spider were destroyed. I am yet to find any survivors in the fire ground, but it is early days.

We will be out here for the next year or so, walking hundreds of kilometres of creek lines, searching for signs of life. There is a lot of land out there. Around 210,000 hectares was burnt, almost half of Kangaroo Island. I remain hopeful that some colonies have survived. 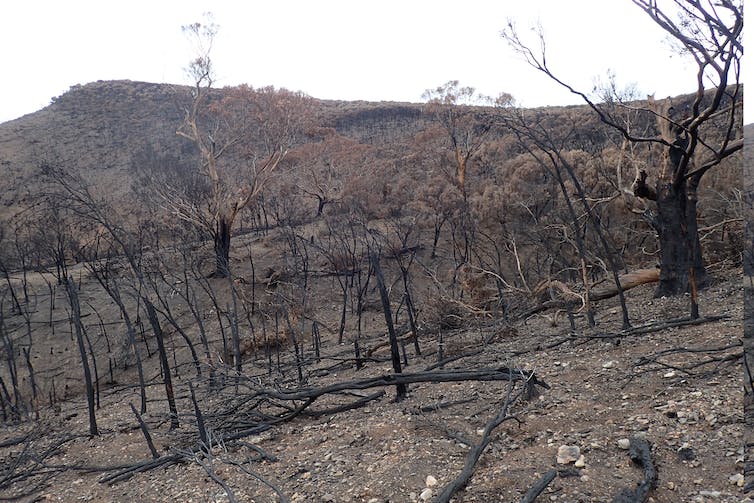 My colleagues and I are in this conservation park looking for less fiercely burnt land in which to look for survivors. Jess Marsh, Author provided (No reuse)

If we find some Kangaroo Island Micro-trapdoor spiders - what then?

Surviving the initial blaze is the first step in the struggle for survival. The post-fire environment has many threats – habitat loss, exposure to hungry predators, weeds. Today, I noticed areas where soil, loosened by fire, has washed into creeks, completely burying them.

If we find some surviving individuals, we’ll protect them by installing sediment control, removing weeds and monitoring them in future.

Why should we care?

Not everyone loves spiders. I get that. But the functions invertebrates perform are vital. Our ecosystem relies on them; humans rely on them. Yet collectively our understanding of invertebrates – their importance and their value – is dangerously low.

The Kangaroo Island Micro-trapdoor Spider plays its own role the ecosystem. It is a predator, but we don’t really know what it eats. It’s a food source for birds, mammals or reptiles, but we don’t know what eats it. So, why should we care?

Firstly, I firmly believe every species has its own intrinsic value; every extinction, although a natural part of life, is a loss.

Secondly, the ecosystem is so complicated we don’t know exactly how the loss of one species will impact its prey, the parasites that live on it or its predators. And when we’re facing multiple extinctions, these effects could be devastating. 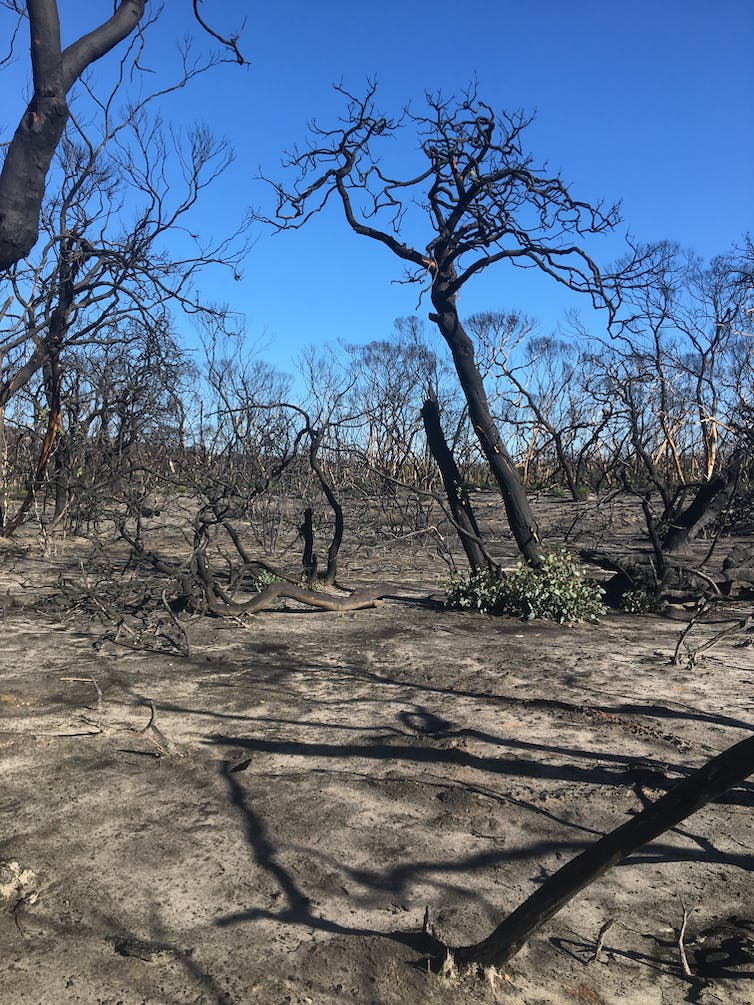 But the majority of Australia’s invertebrate species are yet to be discovered. Many will be similarly at risk, but we have no way of measuring the scale of risk or the repercussions. That’s a fact we should all find scary.

There is hope, though. It’s not yet over for these species. Work such as ours is a step towards understanding how worsening bushfires will affect these vital, but often forgotten, members of our ecosystem.

Read more: Bushfires: can ecosystems recover from such dramatic losses of biodiversity?