As we stepped out of a military helicopter on Victoria’s east coast in February, smoke towered into the sky. We’d just flown over a blackened landscape extending as far as the eye could see. Now we were standing in an active fireground, and the stakes were high.

Our mission was to catch 15-20 bristlebirds and evacuate them to Melbourne Zoo. This would provide an insurance population of this globally endangered species if their habitat was razed by the approaching fire.

As climate change grows ever worse, such rescues will be more common. Ours showed how it can be done. 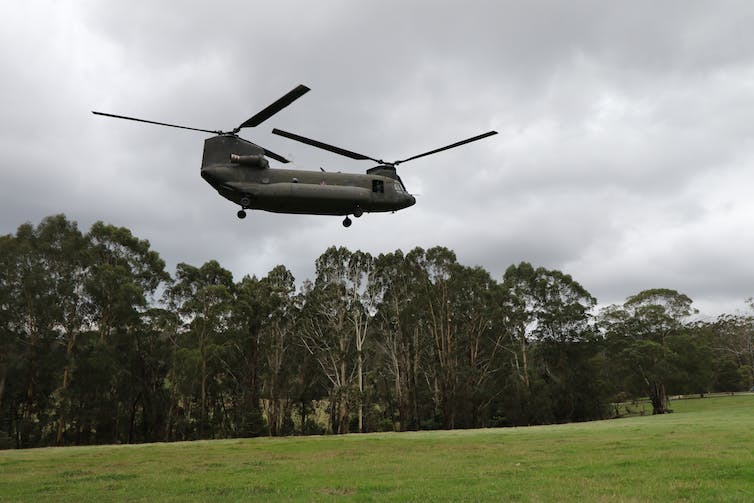 A Chinook helicopter, with the bristlebird field team on board, lands in far eastern Victoria. Tony Mitchell

The plight of the eastern bristlebird

Such a rescue may seem like a lot of effort for a small, plain brown bird. But eastern bristlebirds are important to Australia’s biodiversity.

They continue an ancient lineage of songbirds that dates back to the Gondwanan supercontinent millions of years ago. They’re reminders of wild places that used to exist, unchanged by humans.

These days, coastal development has shrunk the eastern bristlebird’s habitat. The birds are feeble flyers, and so populations die out when their habitat patches become too small.

Fewer than 2,500 individuals remain, spread across three locations on Australia’s east coast including a 400-strong population that straddles the Victoria-New South Wales border at Cape Howe. Losing them would be a huge blow to the species’ long term prospects. 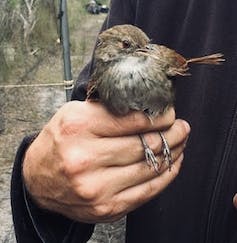 One of 15 eastern bristlebirds caught and evacuated from Cape Howe. Author provided

On the day of our rescue, bushfires had been raging on Australia’s east coast for several months. The so-called Snowy complex fire that started in late December had razed parts of Mallacoota on New Year’s Eve then burnt into NSW. Now, more than a month later, that same fire had crossed back over the state border and was burning into Cape Howe.

Our 11-person field team had two chances over consecutive mornings. Using special nets, we caught nine eastern bristlebirds on one morning, and six the next. As we worked, burnt leaves caught in our nets – a tangible reminder of how close the fire was.

The captured birds were health-checked then whisked – first by 4WD, then boat and car – to a waiting flight to Melbourne. From there they were driven to special enclosures at Melbourne Zoo.

On the second day a wind change intensified the bushfire and cut short our time. As we evacuated under a darkening sky, it seemed unlikely Cape Howe would escape the flames. 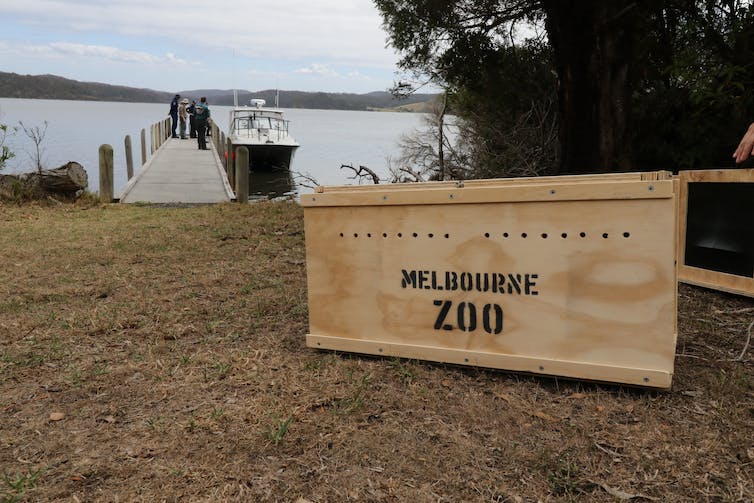 A box containing eastern bristlebirds about to be loaded onto a boat.

In the ensuing days, the fire moved agonisingly close to the site until a favourable wind change spared it.

But tragedy struck days later when fire tore through eastern bristlebird habitat on the NSW side of Cape Howe. Many of the 250 individuals that lived there are presumed dead.

And despite the best efforts of vets and expert keepers at Melbourne Zoo, six of our captive birds succumbed to a fungal respiratory infection in the weeks after their arrival, which they were all likely carrying when captured.

Against the odds, bristlebird habitat on the Victorian side of Cape Howe remained unburnt. So in early April, we released a little flock of seven back into the wild.

We’d initially planned to attach tiny transmitters to some released bristlebirds to monitor how they settled back into their home. But COVID-19 restrictions forced us to cancel this intensive fieldwork.

Instead, each bristlebird was fitted with a uniquely coloured leg band. As restrictions ease, our team will return to Cape Howe to see how the colour-banded birds have fared. 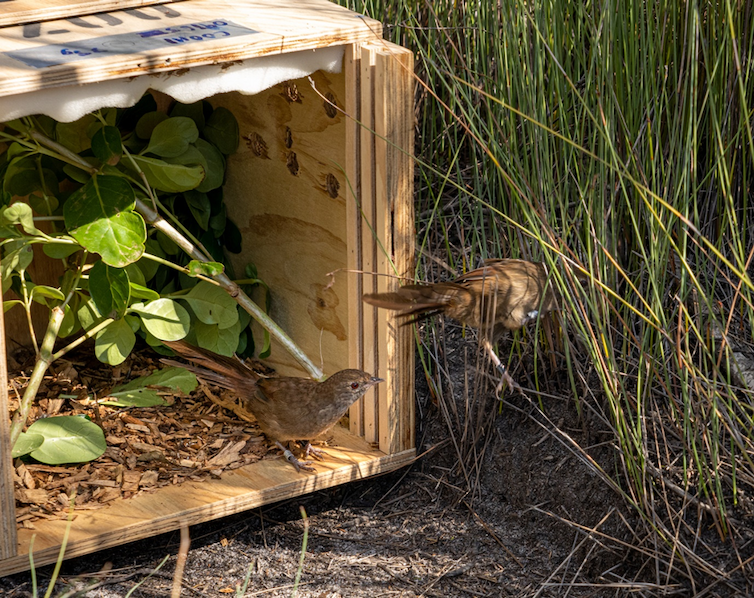 Eastern bristlebirds released back into the wild at Howe Flat. Darryl Whitaker/DELWP

A model for the future

The evacuation involved collaboration between government agencies and non-government organisations, with especially important coordination and oversight by Zoos Victoria, the Victorian Department of Environment, Land, Water and Planning, and Parks Victoria.

This team moved mountains of logistical hurdles. A rescue mission that would ordinarily take more than a year to plan was completed in weeks.

So was it all worth it? We strongly believe the answer is yes. The team did what was needed for the worst-case scenario; ultimately that scenario was avoided by a mere whisker.

But climate change is heightening fire danger and increasing the frequency of extreme weather events. Soberingly, further emergency wildlife evacuations will probably be needed to prevent extinctions in future. Our mission will serve as a model for these interventions.