The “palace letters” show the Australian Constitution’s susceptibility to self-interested behaviour by individual vice-regal representatives. They also reveal the vulnerability of Australian governments to secret destabilisation by proxy by the Crown.

They reveal a governor-general, fearing his own dismissal, succumbing to moral hazard, and the British monarch’s private secretary encouraging him in the idea that a double dissolution was legitimate in the event a government could not get its budget bills passed.

The letters confirm the worst fears of those who viewed Governor-General Sir John Kerr’s sacking of the Whitlam government as a constitutional coup. They reveal Kerr shortened by at most a mere three months the resolution of the crisis created by the conservative Malcolm Fraser-led opposition’s refusal to pass the government’s budget bills, compared to Prime Minister Gough Whitlam’s own timetable shared with Kerr.

The correspondence shows Kerr was privy to Whitlam’s plan to hold a double-dissolution election in February 1976 if all other avenues, including a half-Senate election, failed to secure passage of the budget beforehand. Whitlam candidly told Kerr he would be replaced as governor-general if he obstructed that plan. This introduced the element of moral hazard that saw Kerr take a reckless and self-interested route in ending the crisis rather than the steadier one privately put to him by Whitlam – one that Kerr could have, had he chosen, quite properly facilitated.

Crucially, the palace provided a specific nudge to Kerr in the direction of dismissing the government as a solution. It did so by highlighting one expert’s view that Kerr could secure an election while saving his own position as governor-general. 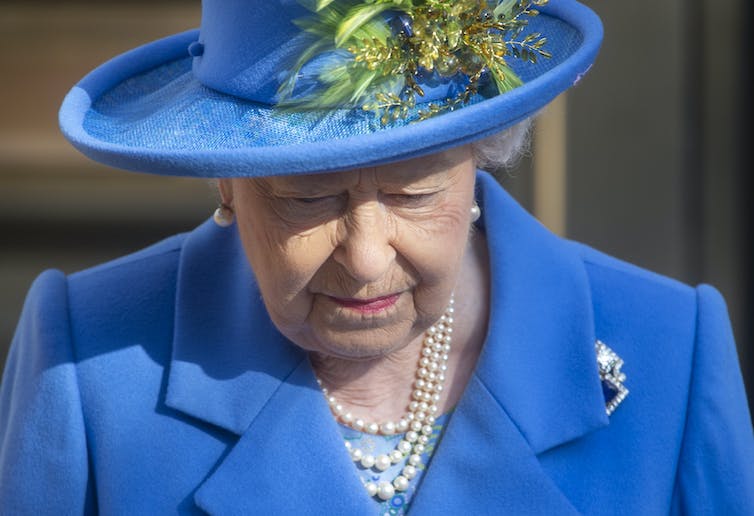 The palace provided a specific nudge to Kerr on dismissing the government. AAP/EPA/Facundo Arrizabalaga

[…] if supply is refused this always makes it constitutionally proper to grant a dissolution.

In such correspondence, the queen’s private secretary is understood as speaking for the queen herself. As such, this could be interpreted as the monarch providing not just comfort but actual encouragement to the governor-general in his sacking of the government.

By adding his point about Forsey as a handwritten postscript to the letter, Charteris created a degree of ambiguity on this score, giving rise to a potential argument that it was Charteris’s personal view and not that of the queen.

But this should be read in the context of the overall correspondence in the year leading up to The Dismissal. In these letters, Kerr repeatedly canvasses the opposition’s potential blocking of supply, the likely resulting constitutional crisis and his difficulties in that context. There is, notably, no counterveiling call from the palace to let the legitimately elected prime minister see his plan through, even though Kerr had conveyed Whitlam’s plan to the palace.

In a crucial letter to Charteris on September 30, Kerr outlined Whitlam’s privately proposed electoral path to a resolution.

In the event the opposition continued to block the budget bills, Whitlam wanted to hold a half-Senate election. After that the government would again put the budget bills to the Senate. Should the opposition continue to block them, Whitlam planned a double-dissolution election. Kerr relayed to Charteris Whitlam’s view that it “could not take place until February 1976”.

Why didn’t Kerr co-operate with Whitlam to implement this relatively speedy path to resolution of the crisis? The answer likely lies in Whitlam’s candour in telling Kerr he would ask the queen to replace Kerr should he not accede to the plan.

Since the letters through Charteris also confirm the queen’s intention, unreservedly, to accept Whitlam’s advice to sack Kerr should she be asked to do so, Kerr knew this threat to be real and increasingly immediate.

The question is, since the queen made clear through Charteris she would uphold Australia’s constitutional convention that the monarch follow the prime minister’s advice, why would her representative, Kerr, not simply do the same with regard to Whitlam’s plans for the crisis’s resolution?

Read more: The big reveal: Jenny Hocking on what the 'palace letters' may tell us, finally, about The Dismissal

This is the note missing from the palace side of the correspondence – an absence against which Charteris’s handwritten postscript pointing Kerr to the Forsey opinion that “dissolution” was a legitimate option when governments fail to get their money bills passed is stark.

Forsey was later a strong public supporter of Kerr’s sacking of the Whitlam government. No wonder the palace fought to stop these letters being released.