More than 600 academics from 36 Australian universities and members of the academic community have signed an open letter to federal and state education ministers calling for a return to a more democratic, cost-effective and functional structure for Australia’s universities.

Australian universities are in crisis. Large-scale redundancies are announced almost daily, with estimates of up to 21,000 jobs at risk this year alone. Financial modelling by the University of Melbourne reveals the prospects for even the richest universities are bleak, while poorer universities face a veritable existential threat.

The impact of job losses is likely to be greater for regional universities, given the significant role they play in their local economies. This impact is likely to be compounded by the government’s recently proposed course fee changes.

Read more: Fee cuts for nursing and teaching but big hikes for law and humanities in package expanding university places

This crisis has been commonly attributed to the impact of COVID-19 and the sudden drop in international student numbers. But while the effects of COVID-19 are undeniable, the roots of the crisis are far deeper. As history lecturer Hannah Forsyth put it:

Australian universities have long teetered — or, worse, arrogantly swaggered — on a precarious foundation.

We argue the problems Australian universities are facing have largely been produced by a profound transformation over the past several decades, which has morphed them into organisations that mirror the hierarchical corporate structures of the commercial sector.

This is despite the fact their enabling legislation establishes them as public institutions with primarily non-commercial goals and functions.

Public Australian universities are created by legislation which establishes them as statutory bodies with delegated legislative powers, similar to local councils. While each enabling act varies, universities are generally comprised of all permanent academic members of staff, all students, all graduates and a council.

Read more: Universities have gone from being a place of privilege to a competitive market. What will they be after coronavirus?

University councils are the governing bodies of each university, with a mandate to act on behalf of the university (constituted as above) to enact its legislative mandate (generally speaking, research and tertiary education). In this sense, universities are not commercial corporations, councils are not boards of directors, vice-chancellors are not CEOs and students are not customers. 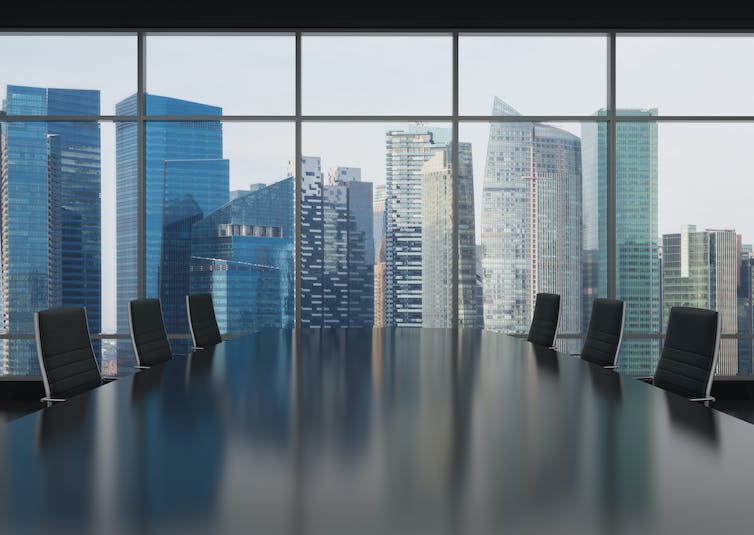 University councils are not boards of directors. Shutterstock

This model — whereby universities are public institutions with public functions, transparently managed by a council accountable to both the university and the broader electorate whose taxes finance the university sector — has been the dominant one throughout history, and still is in the vast majority of the world.

Australia’s shift to a commercial corporate model has weakened this tradition. This has resulted in

The commercial corporate model has been revealed to be particularly fragile in the face of the present crisis. Many have advocated, over the years, that the structural fragility of Australian universities could have been mitigated by exercising more judicious, conservative and careful management.

However, the commercial corporatisation of tertiary institutions has disincentivised managerial elites from doing so.

The federal government has so far provided scant support to help universities deal with the COVID-19 crisis. As a result, university managements have adopted a range of drastic measures to reduce spending particularly through large-scale job cuts.

Management has been accused of prioritising a self-serving and broken model at the expense of the careers and livelihoods of staff who have been systematically disempowered. No radical and necessary reforms of the failing corporate university model have been proposed.

We propose a return to the time-honoured and proven horizontal university model described above. We propose university councils are made more transparent and accountable to both the university, on whose behalf they operate, and the communities they serve. We further propose all directorial, senior and middle-executive roles are selected through internal elective processes.

A return to a more democratic governance structure will realign them with the intentions and expectations already set out in their enabling legislation, and will ensure they fulfil their time-honored and legislated mandate, which is

The promotion, within the limits of the University’s resources, of scholarship, research, free inquiry, the interaction of research and teaching, and academic excellence.

The full proposal, which will be submitted on August 1 to federal and state education ministers, can be found in the open letter all Australian academics can sign.