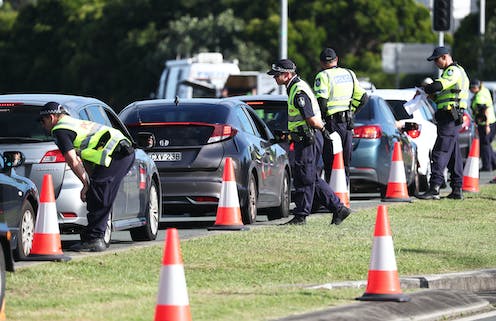 The two young women who got into Queensland from Victoria by allegedly breaking the laws on coronavirus border restrictions have been tried, convicted and sentenced to naming and shaming by the media.

In the febrile climate of public anxiety about the pandemic, this is an invitation to vigilantism, either in the form of online trolling or, worse, by acts of retaliation.

There is also a streak of racism running through some of the coverage, most notably the Brisbane Courer-Mail’s characterisation of them as “enemies of the state”.

Read more: Coronavirus is a huge story, so journalists must apply the highest ethical standards in how they tell it

The Guardian, which has not named and shamed the women, has reported that members of Brisbane’s African migrant communities have contacted the Queensland Human Rights Commission. They say they have experienced a backlash as a result of the stories.

Many people have made serious mistakes endangering public health during the second wave of the pandemic: the people responsible for hotel quarantine in Victoria, the people who have tried to smuggle their way across borders in the boots of cars, and many others who have reportedly got across borders by breaking the rules.

None of them has been named and shamed. There are ranks of government ministers and public servants behind the Ruby Princess and hotel quarantine debacles. Why not track them down and republish photos from their social media posts?

The answer, of course, is power and the consequent risk of retaliatory legal action. The young women have no power, so it is fair to add a charge of cowardice against the media who have indulged in this exercise.

Queensland Police have charged these women – and a third who travelled with them but has not been named and shamed – with providing false and misleading documents and fraud. The latter charge carries a potential prison term of five years.

In these circumstances it was astonishing to see normally responsible media outlets, including the ABC, SBS, The Age and The Sydney Morning Herald, joining the pile-on.

There is a tendency in newsrooms to be stampeded by what rivals are publishing, and an ethically bankrupt inclination to say that because everyone else is running a story, we can run it too.

The women are entitled to due process. Naming and shaming is an atavistic response reminiscent of earlier centuries when malefactors were put in the stocks.

When their case comes before the court, the media will be able to report it under conditions that require the reporting to be fair and accurate.

By running their own trial by media, the outlets that published the women’s names and photographs have been able to write their own rules, enabling some of them to use ugly and excessive language without restraint.

Australians live under the rule of law, not of media organisations. If any parties to this are behaving like enemies of the state, it is those who arrogate to themselves the functions that in our democracy are reserved to the courts.