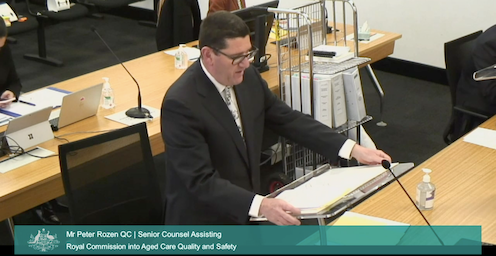 Australia’s aged care sector was “underprepared” to deal with the COVID-19 outbreak and federal authorities had no specific plan for it, according to a stinging indictment from Peter Rozen QC, senior counsel assisting the royal commission into aged care.

In a statement critical of authorities and providers, Rozen said while much was done to prepare the health sector more generally for the pandemic, “neither the Commonwealth Department of Health nor the aged care regulator developed a COVID-19 plan specifically for the aged care sector”.

Rozen was speaking at the start of several days of hearings to look at the sector’s preparations and response to the crisis. The commission will probe the NSW outbreaks in homes but not delve in detail into particular homes in Victoria because the crisis is ongoing there.

Aged care is a Commonwealth responsibility, while the states are responsible for health.

Rozen said on Commonwealth data, more than 1000 residents had been diagnosed with COVID-19, of whom 168 had died.

The pandemic had “starkly exposed” the flaws in the sector that had been highlighted during the royal commission.

In view of the deficiencies it was “hardly surprising that the aged care sector has struggled to respond to COVID-19”.

He stressed the consequences of the deskilling of the aged care workforce and a shortage of clinical skills in homes.

Rozen quoted health minister Greg Hunt saying on July 29 that “aged care around the country has been immensely prepared”. But, Rozen said, “in a number of important respects, the evidence will demonstrate that the sector has been underprepared”.

“We will be asking if greater attention to preparation may have saved lives and could save lives in the future.”

Rozen said that between June 19 and August 3, a crucial period when new infections in Victoria escalated, there was no updated advice for the aged care sector from the Australian Health Protection Principal Committee - the main source of COVID advice.

“There was no advice about how the sector should respond to the risk posed by aged care workers who may be COVID-19 positive yet asymptomatic, particularly those who work in multiple facilities.”

Rozen was critical of the Commonwealth regulator, the Aged Care Quality and Safety Commission, which oversees the sector.

“The regulator did not have an appropriate aged care sector COVID-19 response plan. Given that it was widely understood that recipients of aged care services were a high risk group, this seems surprising.”

On March 17, the regulator wrote to providers with a survey asking about their preparedness. Overwhelmingly they claimed to be prepared, but evidence would be critical of this survey, Rozen said.

“We also have concerns about whether the regulator’s powers of investigation are adequate,” Rozen said, adding that comparable regulators in areas such as workplace or airline safety were not as fettered.

There were “notorious problems” in the relationship between the health system run by the states and the Commonwealth aged care sector, Rozen said.

He detailed an argument between federal and NSW authorities about whether residents with COVID should be transferred to hospitals, with the federal authorities wanting transfers and the state official opposing.

“Equal access to the hospital system is the fundamental right of all Australians young or old and regardless of where they live,” Rozen said.

“Many of the residents in aged care homes worked their entire lives to build the world class health system of which Australians are justifiable proud.

"They have the same right to access it in their hour of need as the rest of the community. To put it very directly, older people are no less deserving of care because they are old. Such an approach is ageist”.

Rozen noted the time it took, after experience in Sydney, for the Commonwealth health department to advise providers that 80-100% of their workforce might need to isolate in a major outbreak, and even then it was not highlighted.

“Regulators in other fields such as workplace safety publish page one ‘alerts’ to disseminate promptly via safety information they learn from incident investigations.”

Rozen said masks were not made compulsory for aged care workers until July 13 – two days after the first recorded deaths of an aged care resident in Victoria. On July 13, the number of new Victorian infections was 250.

“Why did authorities wait until after the fir st death to take what seems the simple and obvious step of making masks compulsory for aged care workers?”