The annual chief executive pay report produced by the Australian Council of Superannuation Investors is a must-read for shareholders and members of superannuation funds. 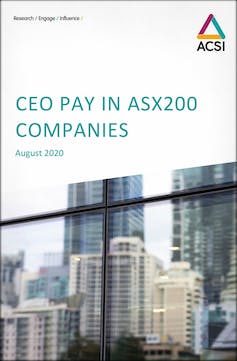 Australian Council of Superannuation Investors The latest report, relating to the financial year that ended in 2019, reveals a new record for the money actually paid in one year, so-called realised remuneration, of AU$37.7 million. The extraordinary sum went to Andrew Barkla, the chief executive of a little-known company, IDP Education. He beat the previous record set by the chief executive of Domino’s Pizza Don Meij who took home $36.84 million in 2017. Paul Perreault from CSL took out second place with realised pay of $30.5 million, followed by Philippe Wolgen from Clinuvel Pharmaceuticals with $20.6 million and Michael Clarke from Treasury Wine Estates with $19.9 million. IDP Education is part-owned by Australia’s universities and matches students with places in the major English-speaking nations of Australia, Canada, Ireland, New Zealand, United Kingdom and United States. Andrew Barkla’s payment was largely the result of the exercise of share options granted prior to the company’s share market listing in 2015. Long-term incentives that aren’t long-term Share options are meant to align executives’ interests with shareholder interests. They are given shares which they won’t be able to sell until the “vesting” date, some years in the future. How much they get when they sell them depends on the share price when their shares vest, meaning they can boost their payout by maximising the price. One way they can do it is through share buybacks. A company buying back its own shares is ostensibly returning capital. But it is also pushing up its share price, and can do it near to vesting day. Read more: The last thing companies should be doing right now is paying dividends A recent US study points to a surge in buy-backs, and hence share prices, ahead of vesting dates. After vesting dates, share prices tend to fall, perhaps because companies that have bought back shares are left with less money with which to expand and withstand shocks. This suggests buy-backs serve short-term rather than long-term goals. 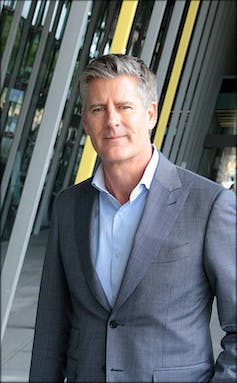 Andrew Barkla took home a record $37.7 million. Regardless of whether or not share prices are ramped up ahead of vesting dates (and there is no suggestion this happened at IDP Education) most long-term incentives aren’t long-term at all. A typical “long-term” incentive for a chief executive lasts three years, whereas super funds and many other investors have longer 10-20 year horizons. The time-limited nature of “long-term” incentives might explain why firms fail to come to grips with climate change and other long-term threats. Why would you, as chief executive, make investments that will make sense over 10 to 20 years, when you are only paid to consider three years? Andrew Barkla’s case is instructive. He was paid $37.7 million for outstanding performance up to the middle of 2019, before the pandemic hit. His firm’s share price peaked at $24.60 in February this year and now sits at $19.25, a fall of 22%. The risks inherent in its business model have become clear in a way they weren’t when he received the payout. There’s hope The Australian Council of Superannuation Investors represents institutional investors including super funds. Between them they own an average of 10% of each company on the ASX200. They have has been campaigning for greater accountability to stop poor performing executives receiving high bonuses when they are not deserved. Read more: Beyond the bottom line: how to reward executives for sustainable practice There are promising signs. Twelve chief executives in the Australian Securities Exchange’s top 100 companies received zero bonuses in the 2019 financial year, compared to only one in 2018. Super funds should be doing more. One proposal is to ensure bonus shares don’t vest until two years after a chief executive’s last day in office. Another is to give executives conditional payments that can later be withdrawn if they are found to have acted badly. If you’re offended by chief executive pay there are things you do. One of the first is to contact your super fund and tell them you’re concerned. The 20 highest-paid ASX200 chief executives, 2019 financial year 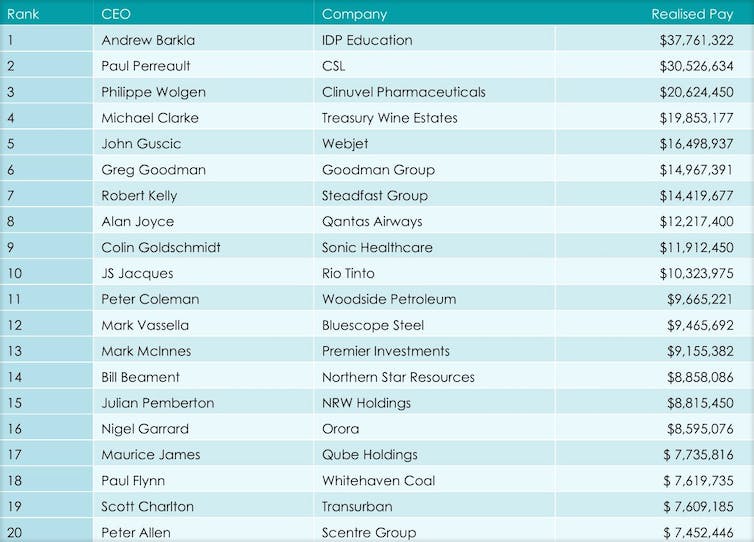