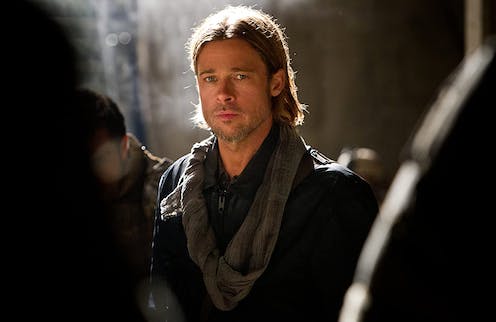 How do filmmakers communicate big ideas on screen? In this video series, film scholar Bruce Isaacs analyses pivotal film scenes in detail. (Warning: this video contains violence and may be upsetting for some viewers.)

There is perhaps no better time than now to appreciate the unique and subversive genre of zombie movies. These films have always been great socio-cultural lenses. Night of the Living Dead and Dawn of the Dead were two classics of the genre.

World War Z (2013), an adaptation of Max Brook’s 2006 apocalyptic zombie novel continues this tradition. In a pivotal scene set in Jerusalem, director Marc Foster encapsulates the greatest threat posed by zombies: the end of our individuality and loss of uniqueness. The casting of Hollywood star Brad Pitt is crucial, as are the cuts between him as a figure and the invading mass.

Thanks to Shelagh Stanton (Digital Media, University of Sydney) for editing and mixing the audio.