Australia is home to some of the world’s most dangerous wildlife. Anyone who spends time outdoors in eastern Australia is wise to keep an eye out for snakes, spiders, swooping birds, crocodiles, deadly cone snails and tiny toxic jellyfish.

But what not everybody knows is that even some of the trees will get you.

Our research on the venom of Australian stinging trees, found in the country’s northeast, shows these dangerous plants can inject unwary wanderers with chemicals much like those found in the stings of scorpions, spiders and cone snails.

In the forests of eastern Australia there are a handful of nettle trees so noxious that signs are commonly placed where humans trample through their habitat. These trees are called gympie-gympie in the language of the Indigenous Gubbi Gubbi people, and Dendrocnide in botanical Latin (meaning “tree stinger”).

A casual split-second touch on an arm by a leaf or stem is enough to induce pain for hours or days. In some cases the pain has been reported to last for weeks.

A gympie-gympie sting feels like fire at first, then subsides over hours to a pain reminiscent of having the affected body part caught in a slammed car door. A final stage called allodynia occurs for days after the sting, during which innocuous activities such as taking a shower or scratching the affected skin reignites the pain.

Read more: 'The worst kind of pain you can imagine' – what it's like to be stung by a stinging tree

How do the trees cause pain?

Pain is an important sensation that tells us something is wrong or that something should be avoided. Pain also creates an enormous health burden with serious impacts on our quality of life and the economy, including secondary issues such as the opiate crisis.

To control pain better, we need to understand it better. One way is to study new ways to induce pain, which is what we wanted to accomplish by better defining the pain-causing mechanism of gympie-gympie trees.

How does these plants cause pain? It turns out they have quite a bit in common with venomous animals.

The plant is covered in hollow needle-like hairs called trichomes, which are strengthened with silica. Like common nettles, these hairs contain noxious substances, but they must have something extra to deliver so much pain.

Earlier research on the species Dendrocnide moroides identified a molecule called moroidin that was thought to cause pain. However, experiments to inject human subjects with moroidin failed to induce the distinct series of painful symptoms seen with a full Dendrocnide sting.

We studied the stinging hairs from the giant Australian stinging tree, Dendrocnide excelsa. Taking extracts from these hairs, we separated them out into their individual molecular constituents.

One of these isolated fractions caused significant pain responses when tested in the laboratory. We found it contains a small family of related mini-proteins significantly larger in size than moroidin.

We then analysed all the genes expressed in the gympie-gympie leaves to determine which gene could produce something with the size and fingerprint of our mystery toxin. As a result, we discovered molecules that can reproduce the pain response even when made synthetically in the lab and applied in isolation.

The genome of Dendrocnide moroides also turned out to contain similar genes encoding toxins. These Dendrocnide peptides have been christened gympietides. 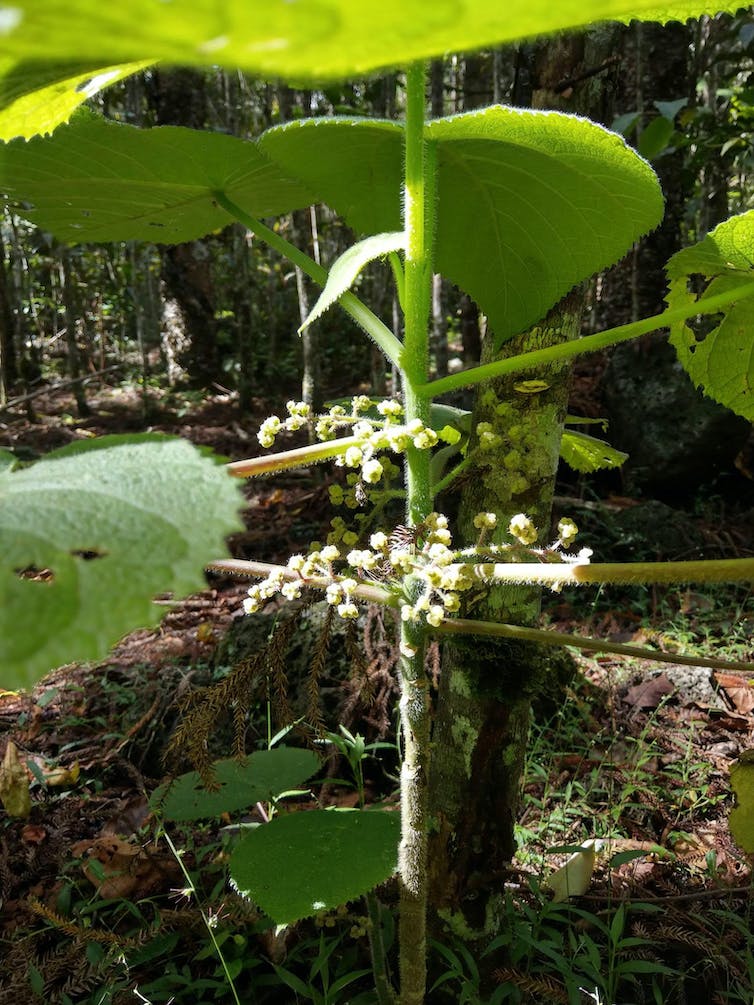 The most toxic of the stinging trees, gympie-gympie or Dendrocnide moroides. Edward Gilding, Author provided

The gympietides have an intricate three-dimensional structure that is kept stable by a network of links within the molecule that form a knotted shape. This makes it highly stable, meaning it likely stays intact for a long time once injected into the victim. Indeed, there are anecdotes reporting even 100-year-old stinging tree specimens kept in herbariums can still produce painful stings.

What was surprising was the 3D structure of these gympietides resembles the shape of well-studied toxins from spider and cone snail venom. This was a big clue as to how these toxins might be working, as similar venom peptides from scorpions, spiders, and cone snails are known to affect structures called ion channels in nerve cells, which are important mediators of pain.

Specifically, the gympietides interfere with an important pathway for conducting pain signals in the body, called voltage-gated sodium ion channels. In a cell affected by gympietides, these channels do not close normally, which means the cell has difficulty turning off the pain signal.

Read more: Explainer: what is pain and what is happening when we feel it?

The Australian stinging trees make a neurotoxin that resembles a venom in both its molecular structure and how it is deployed by injection. Taking these two things together, it would seem two very different evolutionary processes have converged on similar solutions to win the endgame of inflicting pain.

In the process, evolution has also presented us with an invaluable tool to understand how pain is caused. The precise mechanisms by which gympietides affect ion channels and nerve cells are currently under investigation. During that investigation, we may find new avenues to bring pain under control.