Controversy has erupted in recent days over the launch of Kim Kardashian West’s new range of maternity shapewear.

These sorts of garments are otherwise known as maternity support bands, and have actually been around for a long time. But there’s limited evidence to support their touted medical benefits, including alleviating back and pelvic pain.

In the case of Kardashian West’s pregnancy shapewear, endorsing these products to millions of followers is concerning for women already plagued with body image issues.

What is a maternity support band?

Designed to support the belly during pregnancy, this garment generally features a tubular piece of elastic that sits underneath the breast and covers the trunk. The material around the stomach is a slightly thinner than at the back, to allow the belly to grow.

Some maternity support bands include built-in shorts for compression in the bottom and thighs, and can also provide coverage of the upper back and bust.

These bands are commonly used to try to alleviate pregnancy conditions such as pain in the lower back or pelvis. Some health professionals might also recommend wearing them after childbirth to help close a separation in the abdominal walls.

Maternity support bands shouldn’t be confused with belly belts, which are more rigid and sit below the belly, bearing weight.

Do they work, and are they safe?

There’s no quality evidence wearing maternity support bands during pregnancy or after birth can relieve back pain or pelvic pain, or reduce the separation in abdominal muscles.

A small study has shown improvements in pain, but considering limitations in the research design, this may well have been a placebo effect.

Your best bet to reduce pain in pregnancy is to see a doctor or an exercise professional.

Read more: Is vigorous exercise safe during the third trimester of pregnancy?

In one study, women who were at risk of premature labour were instructed to avoid constrictive clothing around the trunk.

This group had significantly lower incidence of premature births than a control group who were not advised on constrictive clothing. This needs further study, but could indicate long-term use of constrictive clothing around the trunk may lead to issues with blood flow. 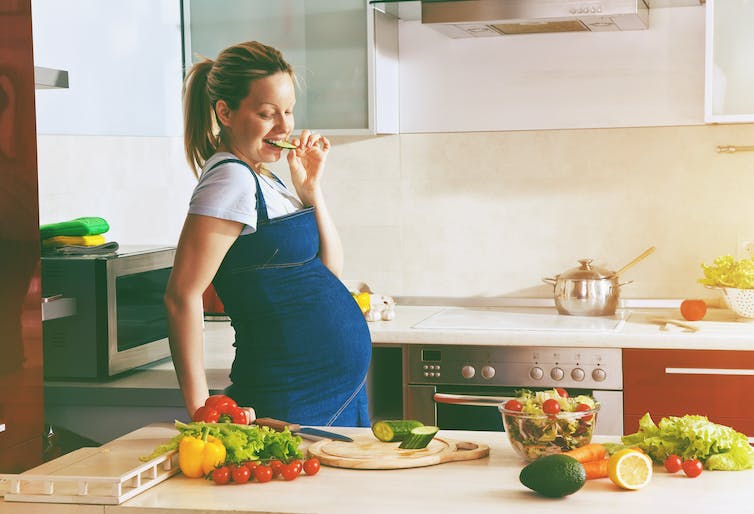 Keeping up a healthy diet is important during pregnancy. Shutterstock

If there’s potential to improve pain (whether placebo or not), and we have no conclusive evidence to suggest maternity support bands are not safe, then what’s the problem?

While maternity support bands may help some women with pain, the commercialisation of pregnancy shapewear is probably contributing to body image dissatisfaction and unrealistic expectations for pregnant women.

With social media often perpetuating unrealistic expectations of body image during pregnancy and after birth, this has likely become even more of a problem in recent years.

A 2016 study found an association between increased time spent on social media and greater body dissatisfaction in pregnancy.

There seems to be a perceived expectation women will maintain their same figure, just with a cute bump. But for most women, that’s not the case.

Products in the SKIMS maternity range carry descriptions like: “lifts, sculpts and shapes your natural silhouette during pregnancy”.

Kardashian West has defended against criticism, emphasising her products are not designed to slim but to support.

It’s important women don’t feel shapewear is necessary to “slim” any part of their body during pregnancy.

Fat and cellulite are normal

You do accumulate more fat when you’re pregnant — it accounts for about half of normal pregnancy weight gain.

Thanks to various hormones, you’ll store more fat on your arms, thighs and bottom (to name a few!). Your body is working to give you enough support to grow a baby, while the increased fat also helps prepare for breastfeeding.

It is pleasing to see some influencers sharing more typical body changes on social media, both during pregnancy and after birth.

In severe cases, body dissatisfaction can lead to disordered eating and excessive exercise in pregnancy. And if mum doesn’t gain enough weight, it puts the baby at risk of being born prematurely or at a low birth weight.

The amount of weight you should gain during pregnancy depends on the weight at which you start pregnancy. This is something you can discuss with your doctor.

It’s important for women to eat an array of healthy foods and do regular physical activity (150–300 minutes per week) throughout pregnancy. The goal here should be the health of both mum and baby — not weight loss.

If shapewear makes you feel more comfortable or confident, by all means wear it. Just check with your medical professional whether it’s right for you.

And remember, regardless of what you eat, how much you exercise, or even what you wear, it’s unrealistic to expect you won’t accumulate any fat beyond your belly. So try to embrace your changing body — after all, it’s making it possible for you to grow a baby for nine months.

Read more: Weight gain during pregnancy: how much is too much?