Can psychoactive drugs be used to treat mental health problems? The idea has been around for years, and recently received some attention in the media.

Interest in the potential of drugs such as MDMA (scientific name 3,4-methylenedioxymethamphetamine), ketamine, psilocybin and LSD (lysergic acid diethylamide) has been growing among scientists and doctors, as well as the wider community.

However, there is still debate among experts about whether these drugs are safe and effective. In a new study, we reviewed the state of the evidence for using these drugs in the treatment of post-traumatic stress disorder (PTSD).

How PTSD is treated now

Up to 10% of people who are exposed to traumatic events such as a serious accident, physical assault, war, natural disaster, sexual assault or abuse will develop PTSD. Symptoms can include reliving the event through unwanted thoughts, flashbacks or nightmares; feeling wound up, having trouble sleeping, concentrating or being on the lookout for danger; and avoiding reminders of the event. These symptoms may last for years if left untreated.

Psychotherapies such as trauma-focused cognitive behavioural therapy (CBT) and eye movement desensitisation and reprocessing (EMDR) therapy are first-line treatments for PTSD. These types of treatments involve teaching patients to confront and come to terms with the painful memories, thoughts and images they have been avoiding. They also provide patients with tools to get back into the activities or places they have been avoiding, and to relax when they start to feel wound up.

While there is strong evidence showing these treatments are effective, not everyone responds to them. Psychoactive drugs are often touted as the solution to this problem. But does the science match the hype?

What do we already know about psychoactive drugs for PTSD?

Ketamine, MDMA, LSD and psilocybin have all been considered as potential treatments for PTSD:

But do these drugs make a real difference in resolving PTSD symptoms? And are they any better than the treatments that we already have?

What does the latest evidence say?

To find out what the current evidence says, my colleagues and I at Phoenix Australia conducted a systematic review of the published research.

The effect of using MDMA with psychotherapy was a little more encouraging, with four small randomised trials reporting positive effects in treating PTSD. We found MDMA currently has more promise than ketamine, based on the studies included in our review. It should be noted, though, that none of these four studies compared MDMA, in combination with psychotherapy, to a typical treatment for PTSD. 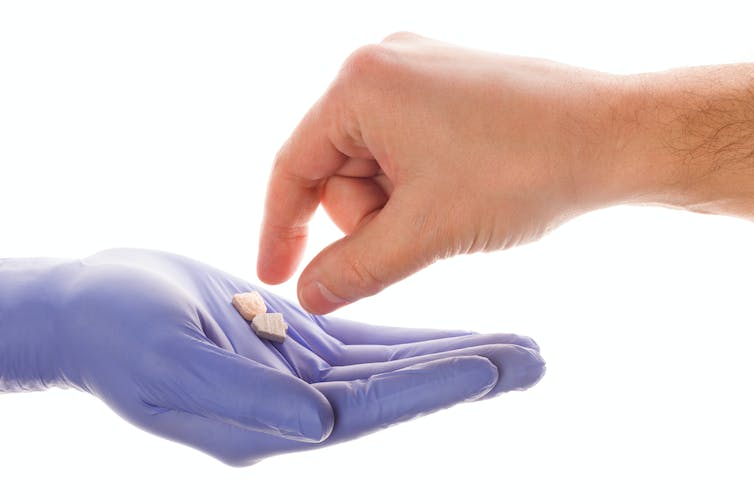 Better known as the recreational drug ecstasy, MDMA may also play a valuable role in the treatment of PTSD and other mental health problems. Shutterstock

The MDMA studies in the review found that improvements in clinician-rated PTSD symptoms, and in self-reported physical responses to stress, were “significantly greater” for those who received MDMA and psychotherapy compared to a placebo. A small trial showed that 17-74 months after MDMA and therapy was delivered, on average, improvements were still being felt.

Another slightly larger trial involved military veterans, firefighters and police officers with chronic PTSD, and found a significant reduction in the severity of symptoms. Out of 24 participants who completed a 12-month follow-up, 16 did not have a PTSD diagnosis.

We also looked for research on the use of LSD and psilocybin in PTSD treatment, and were surprised to discover no randomised controlled trials have been conducted.

Attitudes towards psychoactive drugs for the treatment of PTSD are changing. Some proponents suggest they offer a “chemical safety net” for patients.

However, our review highlights the fact that, scientifically, this area is still in its infancy. There is a clear need for further high quality research, to provide us with a better understanding of these treatments, and how they might fit into treatment options for PTSD.