New Zealand’s government today announced that after seven days of no new community cases linked to the Auckland cluster, most of the country will return to almost normal life, at alert level 1, from midnight.

But restrictions in Auckland will remain in place until midnight on Wednesday, and the city will then move to alert level 2 for at least another two weeks. This means Aucklanders have to continue wearing masks on public transport, but will be allowed gatherings of up to 100 people.

The decision to keep Auckland under stronger restrictions is sensible. Our modelling suggests the current cluster could have a long tail and there may still be undetected cases in the city.

A return to level 1 is premature for Auckland, but the absence of new cases over the past week suggests the cluster is well contained.

Before the entire country can return to level 1, we should consider updating alert level guidelines to keep the requirement of mask wearing and restrictions on large gatherings in place for longer.

Could it still unravel?

Auckland’s move to level 2 shouldn’t unduly increase the risk of a flare-up. Our modelling suggests there will be a 50-50 chance of eliminating the virus by the end of the month, provided the cluster stays contained.

The last time New Zealand moved to level 1, back in June, was after 14 days of no new cases and only two cases in the full month the country remained at level 2. When we made that move we were 95% confident the virus had been eliminated.

Before lifting level 2 restrictions in Auckland, health officials will want to be sure the cluster won’t flare up again at level 1. If we maintain high rates of testing for another fortnight and continue to see no new cases in the community, we can consider level 1 for the city.

We may still see new cases, but there is a big difference between a new case in a family member who is already in isolation and a new case appearing out of the blue that has been infectious for two or three days.

Level 2 does pose a higher risk than Auckand’s current level 2.5, which limits social gatherings to fewer than ten people. The public should remain cautious, especially when it comes to large indoor gatherings.

Even though street protests in Auckland a week ago broke the ten-person limit, they posed a lower risk than indoor gatherings. The Black Lives Matter protests in the US don’t seem to have caused any significant increase in spread there. If there are new cases from the protests in Auckland, we would expect to detect those in the coming week.

So far, only four cases were detected outside Auckland and they were quickly quarantined. Nonetheless, our modelling suggests the chance of an undetected case in the South Island may still be between 5% and 10%. As case numbers fall, this gets lower, but with Air New Zealand’s NZ$50 domestic flights now on sale, it could rise again.

To be sure the disease hasn’t spread outside Auckland, anyone with even the mildest COVID-19 symptoms should be tested. This translates to roughly 10,000 tests each day across the country — but testing rates in the past week have only averaged about 7,000 per day, mostly in Auckland. People in other parts of the country need to be tested too. 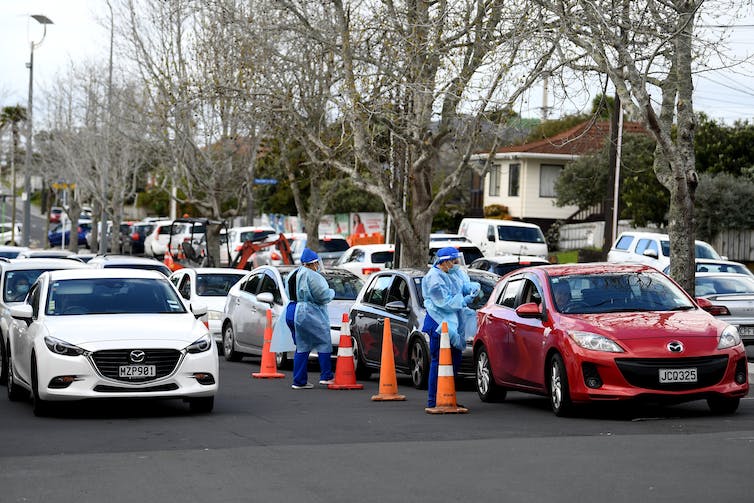 People queuing up to get a COVID-19 test in Auckland. Hannah Peters/Getty Images

Level 1 is not without risk. Even with the increased testing both in the community and of front-line workers, especially in quarantine and isolation facilities, we’ve seen four separate border incursions. At level 1, there is a greater chance an incursion will result in a large outbreak.

The first breach at the border has never been traced but was first spotted in an Americold worker and resulted in the current outbreak, with more than 150 new cases. The second, separate infection in late August was picked up by a maintenance worker at an isolation facility in Auckland. It was caught early and led to no secondary cases.

The third was from a nurse who was infected at work at a quarantine facility. There have not been any secondary cases reported, which is a relief given the large number of close contacts at the nurse’s gym. We could have seen a superspreading event.

Read more: Here's the proof we need. Many more health workers than we ever thought are catching COVID-19 on the job

Then, over the weekend, we learned about a person who developed symptoms and tested positive several days after completing two weeks in managed isolation. This may have been due to an unusally long incubation period or from contact with other travellers in the quarantine facility.

This equates to a new incursion every three or four weeks. Our modelling shows that while most of these incursions will fizzle out on their own, occasionally one will lead to another large outbreak and possible lockdown, most likely in Auckland.

To stop these incursions becoming major outbreaks requires a significant change in public behaviour supported by an update in the alert level guidelines. The use of masks on public transport and restrictions on large gatherings, particularly indoors, may need to be kept in place in the longer term.

It’s almost impossible to know where or when our next outbreak will occur, but if we stay cautious and alert to this possibility, then we can avoid another lockdown.