If a week is a long time in politics, a year’s an eon. The 2019-20 budget announced a regal return to surplus, with a “fundamentally sound” Australian economy at 2.75% growth and unemployment under 5%. Low interest rates and continuing flat wages left the Coalition free to pursue its beloved trifecta of smaller government, reduced public expenditure and deregulation.

The pandemic has knocked these goals out of the ballpark. It’s not just the numbers that have changed, it’s the narrative. At the time of the GFC, the Coalition castigated deficit budgeting as the acme of financial imprudence. Now they are proposing a 2020-21 deficit of A$213 billion. How to square that?

You can’t. All you can do is blow and bluster and hope no one notices you are saying the opposite of what you once proclaimed.

The business of Australia is business, it seems, rather than Australia more broadly. Which is perhaps why anyone listening to the ABC’s PM Budget Special would not have heard the words “arts and culture” mentioned once.

For the cultural sector, this is a budget with no big surprises. Such feelings as exist around already announced measures will continue. In the budget papers they are laid out as a job lot.

Amazingly, given its visibility over the COVID period, ABC operational funding continues to decline in real terms (-0.7% in 2020-21, then -3.7% by 2023-24). This “indexation pause” is partially offset by “additional program measures” (though there is some inconsistency here, as the Portfolio Budget Statement tells a more positive story.) 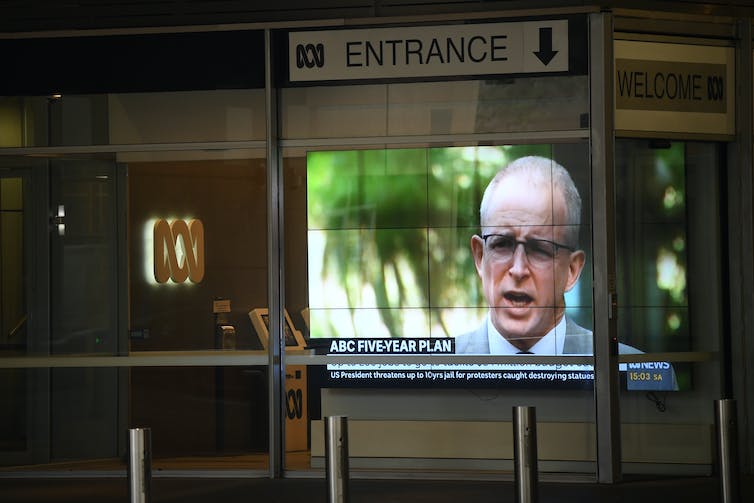 Signage at the ABC building in Sydney: operational funding to the public broadcaster continues to decline in real terms. Joel Carrett/AAP

There is $22.9 million in COVID-19 response packages for a range of institutions from the National Portrait Gallery ($1.2 million) to the National Library of Australia ($5.4 million). 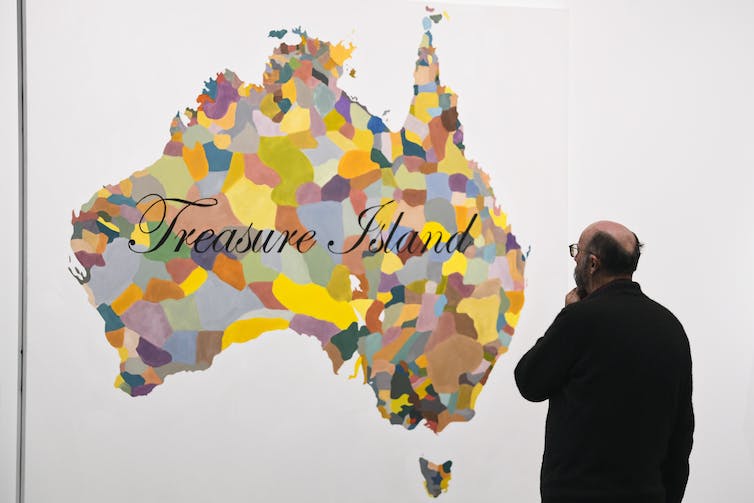 A visitor examines an artwork at the National Gallery of Australia after it reopened in June following closure due to COVID-19. Lukas Coch/AAP

The Media Reform Package includes $30 million to Screen Australia, $20.2 million to the Children’s Television Foundation and $3 million to the Screen Writing and Script Development Fund — a total of $53.2 million.

By contrast, the government is giving “$400M over seven years to extend the Location Incentive Program to attract international investment in the screen industry and provide local employment and training opportunities”.

My colleague Jo Caust has written on the paradox of this. Two comments can be made about it here. First, any Australian government should think very carefully before using taxpayer’s money to subsidise another nation’s culture.

Read more: $400 million in government funding for Hollywood, but only scraps for Australian film

Second, if it is, for non-cultural reasons, determined to do so, it must ensure the incentives for Australian filmmakers are at least commensurate. Otherwise, it is offering up the workforce of its highly trained industry as drone labour.

The centrepiece of this part of the budget are the Restart Investment to Sustain and Expand Fund of $75 million, and the Arts Sustainability Fund of $35 million for “Commonwealth-funded arts and culture organisations facing threats to their viability” due to the pandemic (hint, it’ll be most of them).

Together with the Temporary Interruption Fund of $50 million for COVID-affected screen productions, new support for Regional Arts Australia of $10 million, for Indigenous Visual Arts of $7 million, and crisis counselling for cultural workers of $10 million (they need it), these are useful expressions of support — albeit ones that have been slow to arrive — for a sector that’s experienced the economic equivalent of having its head blown off with a bazooka.

Read more: Too little, too late, too confusing? The funding criteria for the arts COVID package is a mess

Not really. It’s welcome, but the amount going to arts and culture is a pimple to a pumpkin compared to what’s going into the economy as a whole. There are interesting touches – a Regional and Small Publishers Innovation Fund, for example ($16 million). And it’s a relief to see the Australia Council’s allocation bump up by $1 million. But based on these numbers alone, you wouldn’t think anything bad had happened to Australian culture at all.

The issue of an effective balance of support between the major and smaller organisations remains outstanding. This will present the government’s new Cultural Economy Taskforce with a headache almost as throbbing as the one the Treasurer will nurse into the new year.

Then there is the question of how to ensure the money goes to the right people for the right (economy restarting) reasons? This is a budget weighted towards the private sector, based on the expectation tax cuts and asset write-offs will be reinvested and not used to retire debt or, worse, plopped on the short-term money market.

Cultural workers often complain the government is deaf to their needs. It’s not entirely true. But they are part of the public sector. As such, they are a target for governments wanting to use fiscal instruments in a controlled way, dialling down the narrative of leadership and entrepreneurship, dialling up the one on nation building and public works.

Like the care economy, arts and culture are an opportunity missed in the 2020-21 budget. What’s there is helpful. What isn’t remains significant. PM’s Melissa Clarke described the Coalition as adopting a “tried and tested policy approach to economic recovery”.

But in the face of catastrophic disaster, nothing is tried and tested. The truth is Treasurer Josh Frydenberg is taking a risk. Arts and culture are not part of his bet, not this time at any rate.