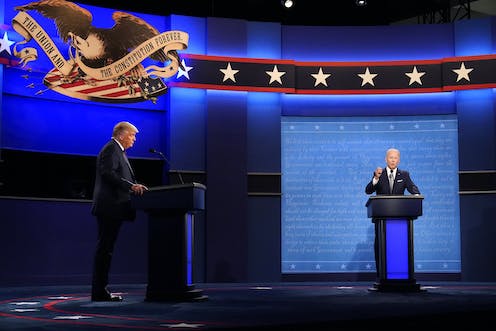 With four weeks left until the November 3 election, the FiveThirtyEight aggregate of US national polls gives Joe Biden a 9.0% lead over Donald Trump (51.4% to 42.4%). Biden’s lead has increased 1.4% since an October 1 article I wrote for The Poll Bludger.

In the key states, Biden leads by 7.5% in Michigan, 7.0% in Wisconsin, 6.6% in Pennsylvania, 4.3% in Arizona and 3.4% in Florida. If Biden wins the states that voted for Hillary Clinton in 2016, plus Michigan, Wisconsin and Pennsylvania, he wins the election with at least 278 of the 538 Electoral Votes.

Pennsylvania is still the “tipping-point” state that could potentially put either Trump or Biden over the 270 EVs required to win. But it is polling closer to Wisconsin and Michigan than in the recent past. The current difference between Pennsylvania and the national vote is 2.4% in favour of Trump.

There are five states where Biden is either just ahead or just behind: North Carolina, Georgia, Texas, Iowa and Ohio. If Biden won all of them, he would win a blowout victory with over 400 EVs.

In the FiveThirtyEight forecast, Trump still has a 17% chance to win, though only an 8% chance to win the popular vote. Trump’s chances have declined 4% since last week. Still, a 17% chance is the probability of rolling a six on a six-sided die.

Perhaps there would have been some public sympathy for Trump had his coronavirus appeared to be bad luck. But it is likely Trump and other prominent Republicans’ coronavirus infections occurred at a September 26 event to announce Amy Coney Barrett as Trump’s nominee to replace the late Ruth Bader Ginsburg on the Supreme Court.

The footage shows people sitting close together, without face masks. This created an impression of reckless conduct by Trump and other Republicans in ignoring medical advice.

In a CNN poll taken after Trump’s coronavirus, 60% disapproved and 37% approved of Trump’s handling of coronavirus; his -23 net approval is a record low on that issue. 63% thought Trump had acted irresponsibly and just 33% thought he had been responsible.

An additional problem for Trump is that coronavirus is back in the headlines. As Trump is perceived to have been poor on this issue, that helps Biden. New US daily cases have plateaued between 30,000 and 50,000.

The major headlines from the debate were that it was a shouting match, and Trump’s refusal to denounce white supremacists. I have said before that the US economy’s fast recovery from the April coronavirus lows is Trump’s best asset for re-election, but he did nothing during the debate to tell a positive story about the economy.

Concerning the Supreme Court fight over Ginsburg’s replacement, a Morning Consult poll found a record 62% supported the Affordable Care Act (Obamacare), while 24% were opposed. In March, this was 55-29 support. There is clear danger for Trump and Republicans in appointing a judge who may overturn Obamacare.

The September US jobs report was the last before the November 3 election. 661,000 jobs were created, and the unemployment rate dropped 0.5% to 7.9%. This was the first month with fewer than a million jobs added since the April nadir.

The unemployment rate has almost halved from April’s 14.7%. But the gain in September was mainly attributable to a 0.3% slide in the participation rate, to 61.4%. The employment population ratio - the percentage of eligible Americans who are employed - increased just 0.1% to 56.6%. It is 1.6% below where it was at the lowest point of the recovery from the global financial crisis (58.2%).

Trump may have undermined his relative advantage on the economy, compared to other issues, by withdrawing from negotiations with Democratic House Speaker Nancy Pelosi over a new stimulus bill. An article by analyst Nate Silver says stimulus spending was very popular: in a September Siena poll for The New York Times, voters supported a $US 2 trillion stimulus by a 72-23 margin.

The Queensland election will be held on October 31. A YouGov poll, conducted September 24 to October 1 from a sample of 2,000, gave Labor a 52-48 lead, a four-point gain for Labor since the last such poll in June. A Queensland Newspoll, which is conducted by YouGov, gave the LNP a 51-49 lead in late July.

57% (up eight) approved of Premier Annastacia Palaszczuk’s performance and 27% (down six) disapproved, for a net approval of +30, up 14 points. Opposition Leader Deb Frecklington had a net approval of -3, up six points. Palaszczuk led as better premier by 48-22 (44-23 in June).

The movement to Labor is likely a result of Queensland’s handling of coronavirus. But polls greatly overstated Labor’s Queensland performance at the 2019 federal election, although they were accurate at the 2017 Queensland state election.

Last week’s Colmar Brunton New Zealand poll had Labour on 47%, National 33%, ACT 8% and the Greens 7%. If repeated at the October 17 election, Labour would win 59 of the 120 seats, two short of a majority. You can read more at my personal website.