Humans are curious and social creatures by nature. The news helps us make sense of the world around us and connects us with our local, national and international community. So it’s no wonder we’re drawn to it.

But the way we consume news has been profoundly altered by media developments. As news outlets have adapted to media trends, the way people watch, read and listen to news has changed. And these changes aren’t without consequences.

The way we consume news matters

The increase of online news, particularly when presented via social media platforms such as Facebook and Twitter, has affected how we access and consume our news.

When news was delivered via traditional one-way outlets such as television and radio, we were passive receivers. But on social media platforms, we’re active consumers. We sculpt and cultivate our news through immediate feedback, such as reacts or shares.

There’s evidence this might not be especially good for us.

Read more: Australians are less interested in news and consume less of it compared to other countries, survey finds

Amid an unfolding crisis such as a pandemic, news presented via one-way outlets might be less damaging than news consumed online. In early months of COVID-19, researchers found news consumed online and via social media was associated with increased depression, anxiety and stress. The effects weren’t as bad when news was consumed via traditional media such as television and newspapers.

This isn’t limited to the pandemic. After the September 11 attacks, young people who consumed news via online sources experienced more PTSD symptoms than those using traditional media. This effect was attributed to more graphic images online, and the possibility for extra exposure as people could watch the footage repeatedly.

Where do we source news?

In an average week, more Australian news consumers source their news online (53%) than via print (25%). But perhaps surprisingly, television is still the most popular mode of news consumption. This year, 63% of Australians said they watched television news in an average week. Nevertheless, we’re far more actively engaged with our news than we once were. 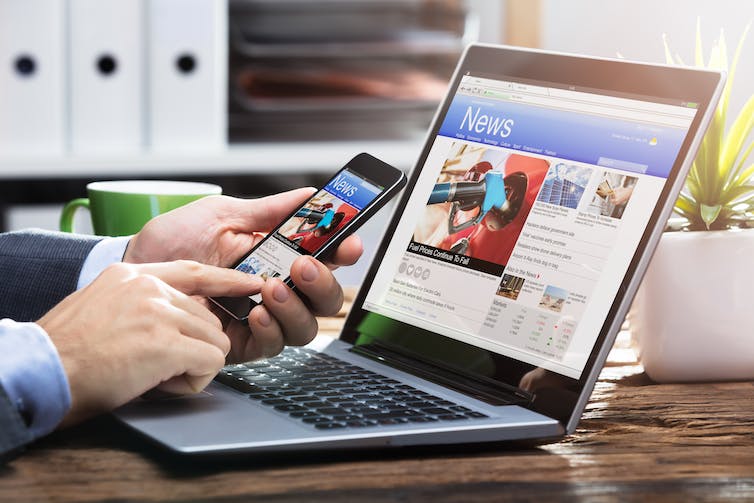 Information is more accessible to news consumers than ever before — and graphic and repeated exposure could be bad for our mental health. Shutterstock

Access to news is also radically different. The ability to consume news 24/7, via an almost endless variety of sources, has prompted experts to encourage us to moderate our news consumption.

Our bad news bias — not good news for our well-being

During times of crisis, we’re more drawn to news. In fact, Australians’ consumption of news significantly increased in 2020. During the 2019–20 bushfires, the percentage of heavy news consumers (people who consume news more than once a day) increased from 52% to 56%, and increased to 70% during the COVID-19 pandemic peak.

Unfortunately, the impact of news on our well-being is also particularly salient during a time of crisis. Multiple studies have found the more we consume news during or after a tragedy, crisis or natural disaster, the more likely we are to develop symptoms of post-traumatic stress disorder (PTSD).

Why are we so interested in bad news, anyway? University of Queensland psychologist Roy F. Baumeister and his colleagues have noted bad is stronger than good. Humans have a “negativity bias”, whereby we pay more attention to negative information than positive.

“If it bleeds, it leads”

Journalists are said to capitalise on our negative bias to capture our attention. Some news sources have learned this lesson the hard way. When a city reporter from an online Russian news website decided only to report good news for a day, they lost two-thirds of their readers.

The problem is, this negativity bias in the news can make the world appear worse than it truly is. 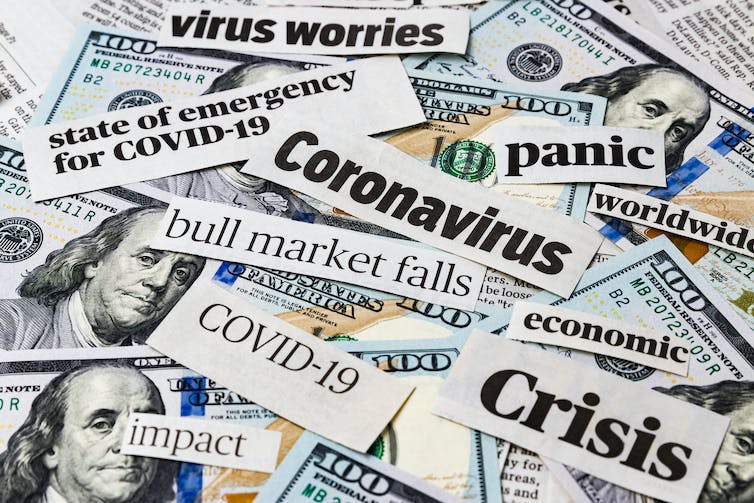 If the news distresses you, try to remember sometimes publications manipulate our powerful cognitive biases to capture our attention. Shutterstock

The repeated presentation of information can create cognitive distortions, meaning we’re likely to interpret newsworthy problems, like violent crime, as more prevalent than they really are.

This negativity bias might also explain the tendency to focus on ‘doom and gloom’ stories on social media, referred to as doomscrolling.

Research published this year showed when we perceive the daily news as negative, we can feel less positive overall. So it’s no wonder increased news consumption can impact our well-being.

Read more: Google News favours mainstream media. Even if it pays for Australian content, will local outlets fall further behind?

Those who use social media largely for news, instead of social networking, show increased anxiety and depression. These results highlight the importance of being strategic about how you use social media, particularly during times of crisis.

How can we take control of our news consumption?

First, it’s important to be aware your news consumption via different sources can look very different. Traditional media tends to focus on the facts, whereas stories, rumours, and human interest pieces are prioritised on social media.

Read more: How fake news gets into our minds, and what you can do to resist it

That’s certainly not to say no news is good news. News is powerful, and helps us stay connected and informed. But in a world where we’re surrounded by news 24/7, it is important we are aware of our cognitive biases and the distortions they create. Let’s take control of our news consumption rather than allowing it to control us.