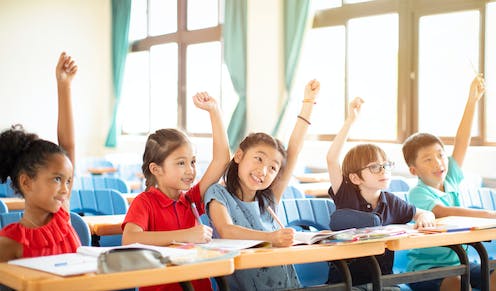 Footscray Primary School in Victoria decided earlier this year to abolish its long-running Vietnamese bilingual program — where classes are taught in both English and Vietnamese. It will replace it with an Italian bilingual program. Vietnamese will be downgraded to two hours per week.

Footscray has been, and continues to be, an important Vietnamese community in Melbourne’s west. Unsurprisingly, there has been substantial community backlash about this decision. At the time of writing, an online petition initiated by one of the parents at the school has garnered around 17,000 signatures.

Italian does not figure in the top five responses in any of these categories.

The bilingual program at Footscray Primary School is not a mother tongue maintenance program. It is a program that should deliver academic and content-based outcomes as well as language and culture to all students, regardless of which language they speak at home.

But placing Vietnamese on equal footing with any other bilingual program ignores its special significance to the local Vietnamese community, and beyond.

It also ignores the relentless battles people from minority immigrant and First Nations communities have had to fight to keep our cultures and languages alive in ways that are meaningful to us.

We live in, and through, language

German philosopher Martin Heidegger once described language as “the house of being”. What he meant is that language is more than a means of communication or transaction. Rather, we dwell in language. And since he conceives “being” as a kind of dwelling, it is in language that we are (or be).

That’s language — but what of languages?

French philosopher and philologist (who studies the history of languages) Barbara Cassin writes the maternal language is:

Cassin’s words might ring true for some, but not all in diasporic communities, as language retention among second and subsequent generations can be difficult to sustain.

Yet if one lives in a society where one’s maternal language is not the dominant one, the linguistic intimacy Cassin describes still only presents a partial picture. This is because our “manner of being” is also shaped by how we are received, supported and validated (or not) in our broader communities.

In a context where non-white migrant communities are perennially held in suspicion and at the margins — that is, until our cultures and cuisines become trendy enough to consume — to “be” or “dwell” in our language becomes a lot more fraught.

Latinx feminist and queer theorist Gloria Anzaldúa calls this relentless switching, negotiating, and self-contorting between language-worlds, living in “the borderlands”, a state of psychic unrest. There is much to affirm and celebrate about living this enriching state of in-betweeness. But it does not erase the labour non-white communities are endlessly performing, to translate our languages, cultures and selves to a decidedly committed monolingual society.

Nor does it erase the pain often felt. Celebrated Chinese Australian artist Lindy Lee has said of her experience growing up under the White Australia Policy:

It was telling me that my difference was not acceptable. And that is an excruciating place to live in.

The ‘superiority’ of some languages

Bilingual language programs are not the only way to maintain local community languages, and in fact few bilingual programs across the country explicitly serve this purpose. But they present a powerful, and rare, opportunity to support such languages, while still offering benefits to the rest of the school community.

As language and literacy experts have recognised, bi- or multilingual children in Australia are chronically underestimated and undervalued in our education system; the system “kills off” languages already existing in their community during early school years, only to encourage new languages in the final years of schooling, when it is least effective.

The decision by Footscray Primary does not do exactly this, since the proposal is to replace one bilingual program with another — Vietnamese with Italian. But it does point to how we value languages differently. Researchers have long recognised the perceived “prestige” of European languages in Australian society, compared with Asian languages, which are often only seen as instrumentally useful — for example, as “trade languages”.

Read more: Want to get ahead this century? Learn an Asian language

But for migrant communities, language is more than instrumentally useful, and programs such as these are more than an educational “value add”.

A revived Twitter thread recently asked: “What’s considered trashy if you’re poor, but classy if you’re rich?” To which many replied: “speaking two languages”. Substitute “rich and poor” for “white and non-white” and the quip starts to ring a little truer.