After three people died in a knife attack in Nice this week that French President Emmanuel Macron called an “Islamist terrorist attack”, there was a sense of déjà vu — we have seen this before.

Amid the sadness of innocent lives taken in a most horrible fashion, there is a sense of foreboding about what is about to come, based on what has so often happened before.

The people of France have lived through so many terrorist attacks in recent decades. This is not just the awful violence associated with the rise of ISIS, but a seemingly endless series of attacks going back to the Strasbourg-Paris train bombing in June 1961 that killed 28.

In 2014, the rise of ISIS saw the beginning of a different kind of terror attack in France. Assault weapons featured in the Charlie Hebdo and kosher supermarket attacks of January 2015 and in the attack on the Bataclan theatre in November 2015.

In some respects, the most shocking of all was another lone actor attack in Nice. On June 14, 2016, a truck driver drove at speed into hundreds of pedestrians celebrating Bastille Day on the promenade, killing 86 and injuring more than 400.

For France’s six million Muslims, the current sadness is compounded by dread and fear.

The outrageous beheading of the well-meaning teacher Samuel Paty on October 16, and a similar attack on a 60-year-old woman and two others in the Notre-Dame cathedral in Nice two weeks later were acts of violence calculated to provoke anger.

The barbarism was deliberate. It was intended to divide France and its people. 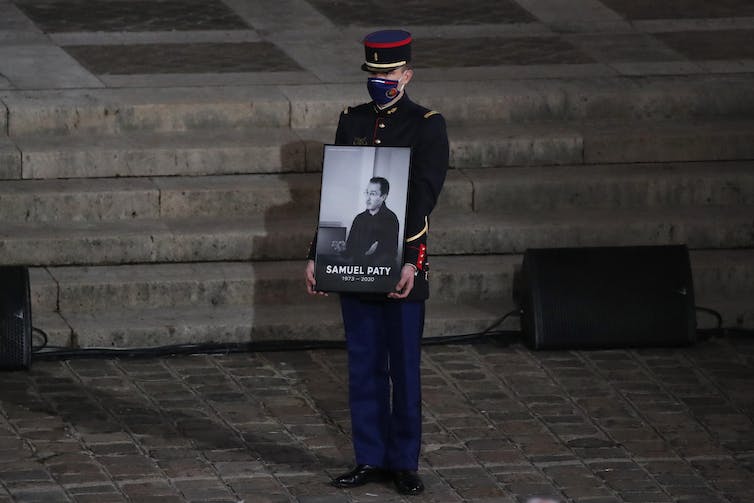 An opinion poll after Paty’s murder found 79% of respondents felt “Islamism had declared war” on France and the French republic. An even higher percentage considered France’s rigid approach to secularism to be threatened.

In a society in which almost one in 10 people are immigrants, being French means acting French, and secularism means there is no place in public life for expressing religious identity or commitment – unless that happens to be aligned with French Catholicism.

For French Muslims, every Islamist terror attack triggers a fresh wave of public questioning about their loyalty to the republic and its values.

After the murder of Paty, the French Council of the Muslim Faith (CFCM) sought to remove any doubt about where French Muslims stood:

The horrible assassination […] reminds us of the scourges which sadly mark our reality: that of the outbreaks in our country of radicalism, violence and terrorism, which claim to be Islam, making victims of all ages, all conditions and all convictions

In an emotional speech during a national ceremony for Paty, Macron expressed similar sentiments, saying

Samuel Paty was killed because Islamists want our future and because they know that with quiet heroes like him, they will never have it. They divide the faithful and the unbelievers. 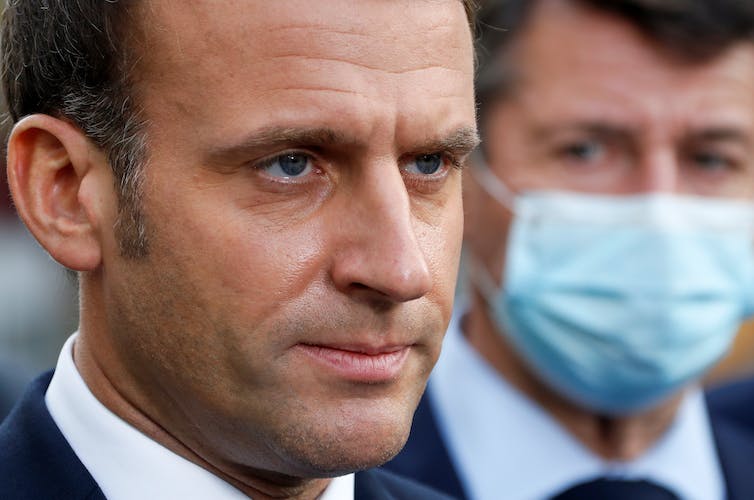 Macron has called for unity in the wake of the attack. ERIC GAILLARD / POOL / Reuters

France’s Muslims backed into a corner

Tragically, while so much of what Macron said accords with what the vast majority of French people believe (Muslim and non-Muslim alike), it leaves France’s Muslims backed into a corner. No matter how hard they try, they can’t be French enough unless they stop being Muslim and, in public at least, turn their back on their faith. 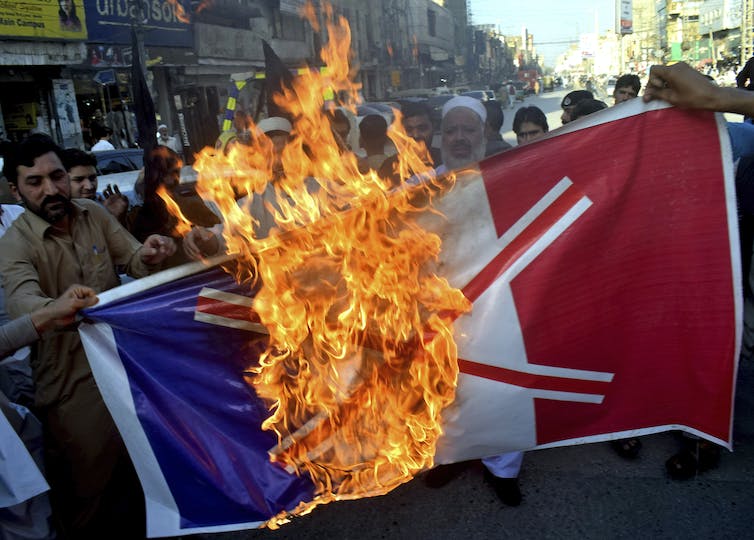 Former Malaysian Prime Minister Mahathir Mohamad, meanwhile, did not even try for moderation when he provocatively tweeted:

In their statements, Erdogan and Khan had their eyes on domestic politics. Mahathir, who has a long history of making provocative statements, just seemed to be seeking attention, heedless of the fact he is playing with fire.

In responding to the terrorist attacks in France, Canada’s Prime Minister Justin Trudeau echoed the thoughts of the French Muslim leaders of the CFCM, saying

They were heinous, criminal acts, unjustifiable by any circumstance and an affront to all of our values.

The criminals, the terrorists, the cold-blooded murderers who perpetrated these attacks do not represent Islam. They do not get to define Muslims in France, in Canada or anywhere around the world.

The French-speaking Trudeau understands France well, but he also understands the multiculturalism of immigrant societies like Canada in a way Macron does not.

Macron is leading a deeply plural society shaped by immigration, but France is a nation that struggles with the language and practice of pluralism.

The multiculturalism of Canada, the US, Australia or New Zealand, on the other hand, is much more relaxed. These countries have an approach to national unity that allows for public expression of difference.

In the hours after the Nice attack, a man threatening a North African shopkeeper with a pistol in the French city of Avignon was shot dead by police after refusing to drop his weapon.

He appeared to be wearing a jacket emblazoned with the “Defend Europe” logo of the far-right, anti-immigrant, group Generation Identity, a group that espouses similar conspiratorial ideas as the Australian who massacred 51 people at mosques in Christchurch – ideas of a “great replacement” of white Christians by Muslims.

As France goes into a second-wave COVID lockdown, its economy on its knees and its people anxious and fearful, the spectre of duelling extremisms and an escalating cycle of violence is the last thing the country needs.

This is a difficult time to be French, but it is especially difficult if you are a French Muslim.

But, so far, he, and the nation of France, are stuck in a rut, endlessly repeating the mistakes of the past, burdened by a flawed framing of identity and a needlessly narrow path to belonging. Déjà vu indeed.