Now Joe Biden is on track to be the next US president, there has been plenty of speculation about what this means for Australia’s policies on climate change.

Biden promises to achieve a 100% clean energy economy and reach net-zero emissions in the US no later than 2050. This puts Australia — which is ranked among the worst of the G20 members on climate policies — under pressure to revisit its paltry greenhouse gas emissions targets for 2030 and to commit to reaching net-zero by 2050 as well.

Read more: Biden says the US will rejoin the Paris climate agreement in 77 days. Then Australia will really feel the heat

But emissions targets are only part of the story. Another important area where the US election could make a difference involves climate finance: when rich countries like Australia channel money to help low-income countries deal with climate change and cut their emissions.

Biden’s win could be the perfect opportunity for Australia to save face and rejoin the UN Green Climate Fund, the main multilateral vehicle for deploying climate finance.

Under the Paris Agreement, developed countries, including Australia, have committed to mobilise US$100 billion a year in climate finance by 2020.

Of this, US$20 billion has been formally pledged to the UN Green Climate Fund. The rest of what countries have committed so far is spread across a range of bilateral partnerships (typically through aid programs), other multilateral channels such as the World Bank, and private investment.

In 2014 Obama committed US$3 billion to the Green Climate Fund, but only transferred the first US$1 billion before President Trump cancelled the remainder in 2017. Biden has pledged to fulfil Obama’s original commitment.

Australia, under the Abbott government, eventually decided to support the fund, initially contributing A$200 million in 2014 and co-chairing its board for much of its early stages. 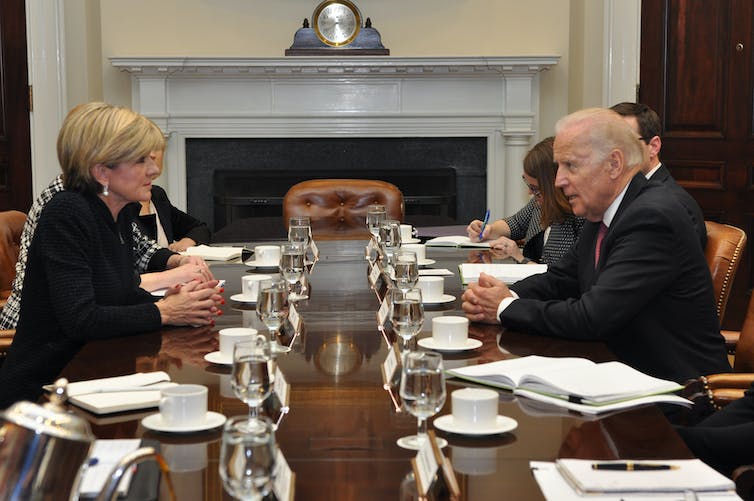 The Abbott government joined the fund in 2014. The Office of the Minister for Foreign Affairs

When the fund called for new commitments in 2018, Prime Minister Scott Morrison announced over talkback radio that Australia would not “tip money into that big climate fund”. Australia lost its board seat at the end of 2019.

Minister for Foreign Affairs Marise Payne elaborated at the time:

it is our assessment that there are significant challenges with [the fund’s] governance and operational model which are impacting its effectiveness.

Australia stood by — and even exceeded — its overall pledge to provide A$1 billion in climate finance over five years to 2020, but it opted to provide this assistance through other channels, mainly bilateral partnerships with governments in neighbouring countries, including A$300 million for the Pacific.

Even so, Australia’s stepback from the fund was condemned by Pacific island countries, whose populations are among the most vulnerable to the impacts of climate change, and who are strong supporters of the fund.

Former President of Kiribati Anote Tong commented on the decision in 2018:

I think we are coming to the stage where some countries don’t care what their reputation in the international arena is. It seems [Australia] is heading in that direction.

The cast has changed – will the script say the same?

Our 2017 research on Australia’s climate finance commitments found pressure from the US — not least during Obama’s visit to Australia in 2014 — and other countries ultimately served as a catalyst for Prime Minister Tony Abbott to overcome his reluctance to contribute.

Obama on climate change at the University of Queensland.

Subsequently, the Trump administration’s recalcitrance on climate change appears to have given the Morrison government cover to resist international pressure and pull out of it.

Now that the cast has changed again, can we expect Australia to rejoin the fund?

There are signs Morrison’s rhetoric on climate change has shifted compared to Abbott’s. But this hasn’t translated into a major policy shift, and he still faces intense pressure from the coalition’s right wing to do as little as possible.

Read more: Australia is lagging on climate action and inequality, but the pandemic offers a chance to do better

However, as one of the more moderate members of the Liberal Party, Minister for Foreign Affairs Marise Payne can be expected to appreciate the diplomatic value of recommitting to the Green Climate Fund.

After the government’s recent audit of multilateral organisations, Payne observed that mulilateralism through strong and transparent institutions “serves Australia’s interests”. Recommitting to the Green Climate Fund would be consistent with this message.

Two other key variables are how the fund and the broader global context have evolved.

In 2014, the fund hadn’t yet delivered any money to developing countries. Since then, work on the ground has got underway, but the fund has faced criticism around its governance and slow disbursement.

Progress has been hampered by recurring disagreements between board members from developed and developing countries over the direction of the fund.

While on the fund’s board, Australia was a persistent advocate for robust decision-making processes. But it won’t be in a position to shape the fund’s governance for the better unless it recommits.

In any case, a number of contributing countries, such as France, Germany, Norway and the UK, have doubled their previous commitments.

This is a vote of confidence in the fund’s capacity to deliver results and leverage private resources more efficiently than dozens of bilateral funding channels.

And it shows how pressure on Australia from Biden will be backed up by the global momentum for climate action, which has built up since the Obama administration. 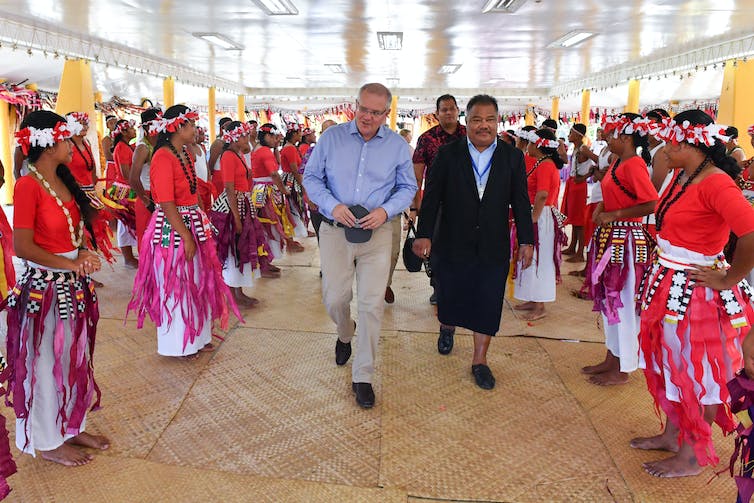 While Australia has pledged a further A$500 million for the Pacific from 2020 onwards, its overall A$1 billion commitment, which extends across the Indo-Pacific and beyond, expires this year. Many countries are also due to update their emissions targets under the Paris Agreement ahead of a major summit in 2021.

But COVID-19 is a wild card. It has placed new demands on development assistance programs and national budgets in Australia and elsewhere.

Still, Australia has fared much better in the pandemic than many other countries so far, while also running an aid budget lower than many of its peers. This means Australia can hardly justify going slow on funding when climate change poses a growing threat.

Ramping up its overall commitment to climate finance — and renewing its support for the leading multilateral fund in this area — will be an important sign that Australia is ready to play its part.