The Reciprocal Access Agreement (RAA) reached in principle this week by Japan and Australia provides a legal framework for the Australian Defence Force and the Japanese Self-Defence Force to operate in each other’s territories.

It has taken six years to get to this point. There are various reasons for this, but a significant stumbling block has been Japan’s death penalty and the Australian government’s opposition to it.

In Japan, 94 prisoners have been executed by hanging since 2000. In contrast, Australia is firmly opposed to the death penalty.

The Australian government took a bold step in 2018 by launching Australia’s Strategy for Abolition of the Death Penalty, advocating its abolition globally.

No guarantees on death penalty - yet

The bilateral defence co-operation with Japan is a case in point. The negotiations stalled because the Australian government wanted an assurance Australian Defence Force members would not be sentenced to death, even if convicted of crimes punishable by death under Japanese law.

However, in June 2020, it was reported a breakthrough was made in the negotiations where the Japanese authorities were considering replacing the death penalty with the maximum sentence that would be applied under Australian law.

With the in-principle agreement, it has been reported that if an ADF member were to be convicted of serious crimes in Japan, the punishment would be considered on a “case by case” basis.

It is unclear, however, how this case-by-case mechanism will operate. There is no public guarantee to date that Australian soldiers would not be subject to the death penalty.

Interestingly, the Japanese Ministry of Foreign Affairs and Japanese-language media were silent on this sticking point.

A “case by case” approach may appear like a step back from the breakthrough reported in June, if it means members of the Australian Defence Force could be executed in some cases. 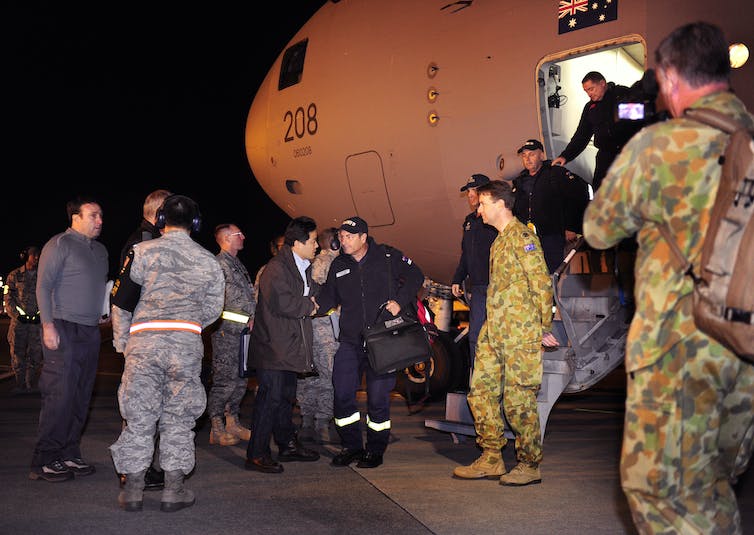 There is yet no clear indication if Australian soldiers would be spared the death penalty should they be convicted of a crime that carries this sentence in Japan. Cpl Raymond Vance/ADF handout/AAP

How governments can work towards abolition

The death penalty tends to be viewed in binary terms: either countries have it or they don’t. It is often cast as a domestic criminal justice policy, with international organisations such as the United Nations having some influence.

We pay less attention to the subtle ways in which abolitionist governments can restrict the application of the death penalty in retentionist countries. For example, this may involve:

This is what William Schabas referred to as the “indirect abolition” of the death penalty. It offers much potential as a template for how Australia might achieve its 2018 strategy in the region.

Casting our eyes from Japan to Vietnam, we find another strategic partnership with Australia that may eventually prove ripe for indirect abolition.

The Australian statement on the 15th annual Australia-Vietnam Human Rights Dialogue in 2018 noted:

So it seems an ideal time to push for creative ways to realise the 2018 strategy. This is especially so given that the Australian and Vietnamese prime ministers agreed in August 2019 to develop an Enhanced Economic Engagement Strategy with the aim of becoming top ten trading partners and doubling bilateral investment.

These developments of middle powers joining together are occurring against a backdrop of growing Chinese aggression towards Vietnam in the South China Sea, or the East Sea, as it is referred to by Vietnam.

This would seem to afford an opportunity for Australia to engage with Vietnam on why its death penalty practice is closer to China’s than to its “partner for shared prosperity”.

Read more: Despite a reduction in executions, progress towards the abolition of the death penalty is slow

More work to do

While Australia has taken a principled stance against the death penalty with Japan and in its interactions with Vietnam, we do not know how this commitment would translate to other situations, with other nations.

Australia might lack the necessary soft power to nudge other countries to align themselves with its mission. Alternatively, Australia may have enough economic power to push its agenda even though retentionist governments may view its death penalty diplomacy as unwelcome interference in their domestic criminal policy.

Australia is at a pivotal moment in terms of testing its own commitment to its strategy, especially in our region. This is a critical time for determining its role in advocating for abolition of the death penalty in Asia.