The people taking to the streets are young, educated, urban Thais. As a group, they bear little resemblance to the “redshirt” protesters of 2010, or the older generation of Democrat Party supporters who followed Suthep Thaugsuban onto the streets in 2014.

Read more: 'This country belongs to the people': why young Thais are no longer afraid to take on the monarchy

What are the protests about?

In 2019, Thai electors accepted a new constitution written by a Constitution Drafting Committee nominated by the junta, known as the National Council for Peace and Order (NCPO).

This constitution unsurprisingly guaranteed a major role for the military in a quasi-democratic structure of government. In particular, the military was to nominate the 250-member Senate in the bicameral legislature. Elections for the lower house, the House of Representatives, were set for 2019.

In the event, the military and the established political parties, in particular the Palang Pacharath Party (which was formed to enable senior military officers to run for parliament), the Democrat Party and Pheu Thai, the successor to the Thai Rak Thai party established by Thaksin Shinawatra, were much taken aback by the emergence and substantial success of a new party known as Future Forward (FF). 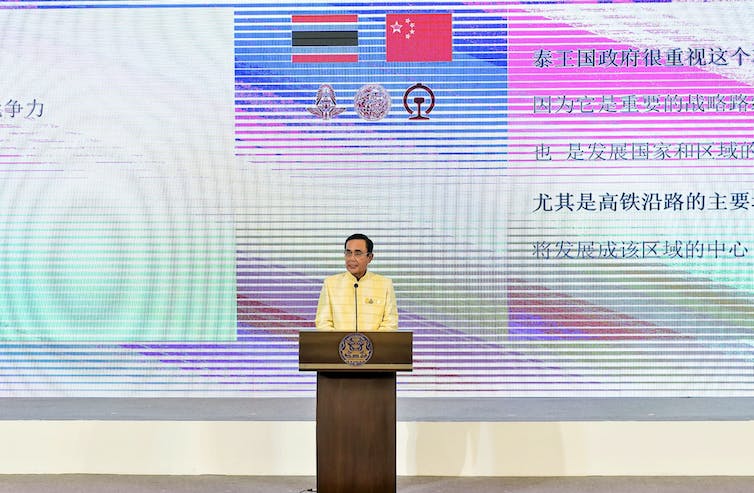 Future Forward won 18% of the popular vote and 81 of the total of 500 seats, the third-largest number of seats. The new government, a coalition dominated by Palang Pracharath, quickly concluded the success of the new party was bad news. It deployed the Election Commission, later backed by the Constitutional Court, to dissolve the party and ban its principal leaders (Thanathorn Juangroongruangkit and Piyabutr Saengkanokkul) from holding political office.

This was met with outrage by young people attracted by the leadership of Future Forward and its policies – particularly control of the military, public social expenditure, and the substantive decentralisation of government. Its dissolution ushered in several months of “flash mobs” of protesters at unheralded locations, mainly in Bangkok. That has evolved into more formally organised protest rallies from the middle of this year.

Taking to the streets

There was a large rally in the vicinity of the Grand Palace, home to Thailand’s king, in August. Protesters demanded the government resign and the monarchy’s place in Thai governance be reformed. They also wanted a new constitution and an end to the harassment of protesters.

On September 19, a further rally at Democracy Monument led to a march on Government House in Bangkok. Before the day was over, the protesters had crossed paths (some say by police design) with a royal motorcade carrying the queen and crown prince, and the protesters and police tangled outside Government House.

The prime minister’s reaction was to extend an existing state of emergency (put in place as part of an attempt to control the spread of COVID-19) to include a ban on assemblies of more than five people. 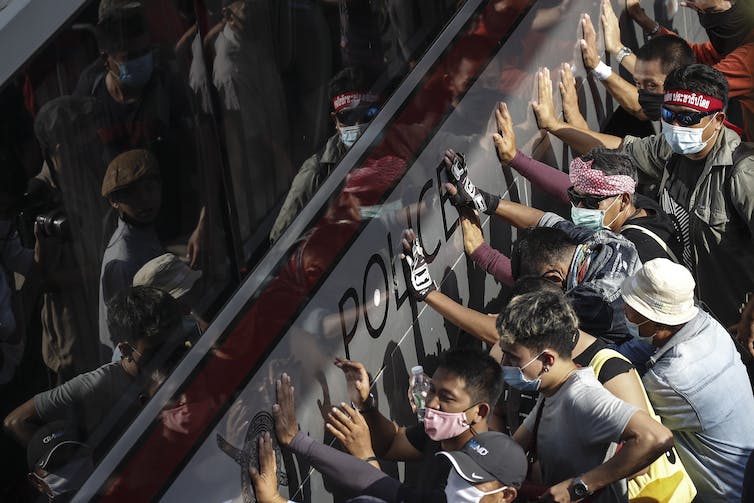 Pro-democracy protesters push a police bus in an attempt to break through a barricade on their way to Government House in Bangkok. AAP/EPA/Diego Azubel

The following evening, thousands gathered at Ratchaprasong intersection in the commercial heart of Bangkok in defiance of the limitation on assembly (which was dumped in the following days).

Since then multiple rallies have been held at various points throughout Bangkok, unannounced except on social media (notably the messaging app Telegram).

The tone of the police response to the protests changed at a large rally outside Parliament House in November. Inside, parliament was discussing seven proposals for constitutional reform; outside, the police used a water cannon and tear gas on the large crowd of protesters. At least 41 people were injured, with reports of five wounded by gunshot.

A water cannon had been used on an earlier occasion, after which the police committed not to deploy the weapon again.

What happened inside parliament house was a “stitch-up”: in setting the agenda for discussions of a new constitution, the majority of the members of parliament repudiated the one proposal supported by the protesters, the iLaw proposal.

The iLaw proposal was the only one to call for the revocation of all of the policies introduced by the military junta, the NCPO, to restore an elected Senate and the practice of selecting a prime minster from among elected members of the parliament. It would also ensure that constitutional reform would not exclude reform of the monarchy.

The two proposals deemed acceptable by the government and opposition parties in parliament, which will presumably now be reconciled with each other, do not include any of these features.

In response to police actions, the protesters marched on police headquarters and threw pots of paint at the entrance. With confrontations between police and protesters becoming increasingly violent, the prime minister has also indicated the gloves are off.

Too late for compromise?

Royalists, supporters of the king, have become more vocal and numerous and obvious in their bright yellow clothing at their rallies, and may be expected to turn out at the offices of the CPB.

The protesters are young. They are represented as being one side of a generational divide. They are vulnerable to being charged under Section 112 of the criminal code that specifies the crime of lese majeste, which forbids criticism of royalty.

Read more: A year on, coup leaders rule with disdain for Thais and democracy

The protesters are also open to the serious charge of changchat – “hatred of the nation”.

All the same, the younger side of the generational divide has met again the profound disdain of their elders. Arguably a line has now been crossed. As a prominent protest leader, Jatupat “Pai Dao Din” Boonpattarasaksa, has proclaimed, the time for compromise has passed.