Throughout the coronavirus recession we’ve been told there’s a balancing act when it comes to lives.

On one hand, lockdowns save lives by limiting the spread of coronavirus.

On the other, they are said to cost lives by winding back economic activity and pushing up unemployment and misery.

Some argue that on balance they increase deaths rather than preventing them.

Some claim the “great lockdown” will be as destructive as the Great Depression. Others talk of sharp increases in suicide rates. Others say it is complex and we just don’t know.

We are able to offer an alternative fact-based perspective, at least when it comes to Australia.

Downturns can save lives

In a just-published discussion paper we have examined the relationship between Australian unemployment and deaths over the four decades between 1979 and 2017 using administrative data sorted by state, age, sex, and cause of death.

Unemployment is a good proxy for economic downturns. As has been happening this year, unemployment goes up when the economy turns down. 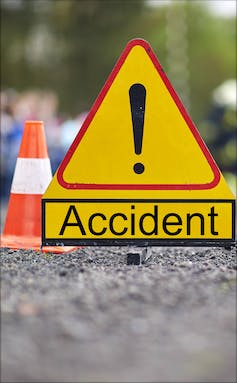 On average we find no relationship between unemployment and mortality. In particular, we find no significant increase in suicide rates.

But we do find a significant effect on motor vehicle deaths.

The higher the unemployment rate, the fewer motor vehicle deaths.

In this respect, economic downturns save lives, mainly among young men aged 15 to 34.

We find that for each percentage point increase in the unemployment rate, 70 young lives are saved per annum.

Our estimates imply 425 fewer deaths from road accidents than normal in 2020 if the unemployment rate climbs from 5.1% to 10% in 2020 as predicted by the Reserve Bank.

Separate from our study, the Bureau of Statistics count shows that at times this year we’ve had fewer than normal non-COVID deaths. 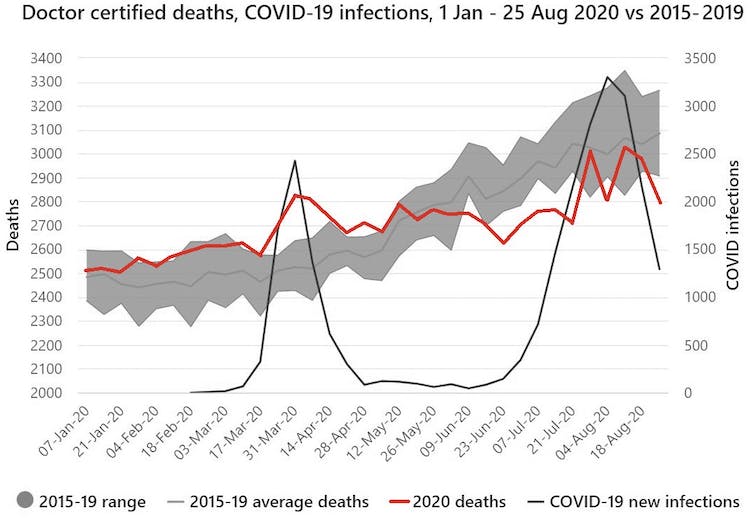 Australian Bureau of Statistics Provisional Mortality Statistics Our findings aren’t that unusual. Minimal and even overall life-saving effects of economic downturns have been observed in the United States, Germany, Canada, France, the OECD and the Asia-Pacific. Potential reasons why were set out by National Bureau of Economic Research economist Christopher Ruhm in a 2000 paper entitled Are Recessions Good for Your Health? Read more: COVID lockdowns have human costs as well as benefits. It's time to consider both He argued that while economic downturns usually come with financial hardship, they leave people with more time to seek treatment, socialise, care for their relatives, and engage in healthier lifestyles. Fewer hours commuting mean fewer road accidents and fewer hours at work mean fewer workplace accidents. But our findings are different in one respect. In contrast to recent findings for the US, we find no impact of weaker economic conditions on the mortality rates of relatively vulnerable populations such as very young children (0-4 years) and the elderly (65-84 years), nor on mortality due to heart disease, respiratory disease, cerebrovascular disease, pneumonia or influenza. Health systems help One reason for the difference between our findings for Australia and those for the US might be that in countries with universal health care downturns don’t deprive people of health coverage. Canada and other OECD countries with universal coverage also perform better in downturns than the US. During the current recession there are reasons to be even more optimistic. Our estimates of lives we would expect to be saved among young men might be exceeded due to the impact of working from home and lockdowns in keeping traffic off the roads. Road accidents cost lives Road safety is a pressing problem for Australia. Sydney ranks in the top 25 most most congested cities in the world. Australia relies heavily on the car for transport, with almost 65% of all kilometres travelled and 90% of commuting kilometres travelled being by car. Nevertheless, we present our findings with caution. The current crisis is unprecedented. They do not preclude an impact on suicides this time, although there’s so far no evidence for one. They certainly don’t preclude an impact on wellbeing. But it would be wrong to conclude that downturns cost lives overall. In Australia, over the past 40 years, we’ve found no evidence that they do. If this article has raised issues for you, or if you’re concerned about someone you know, call Lifeline on 13 11 14. The article originally wrongly said Sydney ranked in the top 25 most deadly cities in the world for road accidents. It has been changed to say Sydney is ranked in the top 25 most most congested cities in the world.