What was filmmaker John Hughes thinking when he made Home Alone?

But Home Alone (1990), enjoying a 30th-anniversary re-release in Australian cinemas this week, plays differently. Eight-year-old Kevin McCallister (Macaulay Culkin) is punished and forced to sleep in the attic. There, he wishes his family never existed.

The next morning he wakes to find himself the only occupant of his house — forgotten by the rest of his family as they head to Paris for Christmas.

There are no self conscious teens grappling with coming-of-age issues and no irresponsible and naïve adults belatedly learning life lessons in this film. Instead we get super cute Kevin pretending to be the “man of the house”.

A false sense of cuteness

Hughes obviously knew he had lightning in a bottle with Culkin, who had co-starred in Uncle Buck the year before.

Although only nine at the time of filming, Culkin is a strong, extroverted actor with great comic timing and a lively, energetic performance. He delivers his lines thoughtfully and can turn on the emotion when he needs to. He carries the film single-handedly. All other characters are really just plot devices for Kevin’s mischievousness — or his introspection.

But if Kevin is “home alone”, where is the drama? Hughes introduces a secondary plot of two burglars trying to break into the house. This is where the film takes an uncharacteristic turn for the macabre.

What has been one of Hughes’ usual saccharine romps involving dysfunctional people learning to deal with family life becomes a sadistic and bruising experience akin to a PG-rated Texas Chainsaw Massacre.

The film lures you into its cutesy first two acts – Kevin walking around in his dad’s shoes; shopping at the supermarket; the famous aftershave scene where he evokes Edvard Munch’s The Scream – before Kevin unleashes a bloody onslaught of booby traps and tortures expected of an Arnold Schwarzenegger action movie.

Hughes knows his cinema history. You can see the influence of Buster Keaton or Charlie Chaplin in Home Alone, setting up one sight gag after another. But here, each gets increasingly violent.

Hughes demonstrated fine comic writing skills with John Candy and Steve Martin in Planes, Trains and Automobiles and with Candy again in Uncle Buck. Both films are laden with slapstick. But their jokes are the result of stupidity on behalf of the adult characters. The hurt is to themselves, and mostly superficial.

Kevin’s tricks, however, involve BB gun shots to the face and genitals, scorching metal searing flesh, nails inserted into feet and the use of flame throwers.

Read more: How far can you go to lawfully protect yourself in a home invasion?

At the end of the film Kevin doesn’t need the pandering of his mother — he needs a serious psychological assessment.

It is almost like watching a short film within a much larger one. It seems Hughes started out writing a script with the same central idea of most of his films: that even though families bicker and often harass each other, familial love is the unbreakable core of life.

But then he went dark. Really dark. 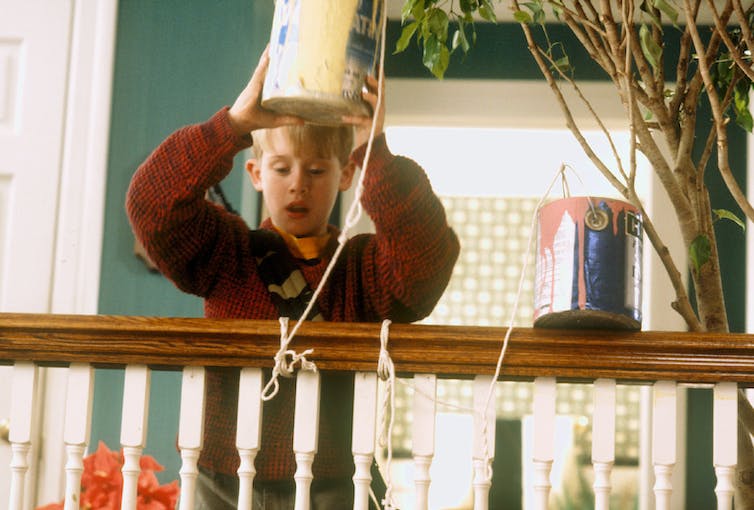 It’s all fun and games until someone gets hurt. Disney

Home Alone feels like it was written by Hughes for the first hour — then Quentin Tarantino, with its ultra violence. It then lapses back into Hughes-with-extra-schmaltz for the last 20 minutes.

We need to talk

How one uber-violent kid’s movie is frequently ranked among the best Christmas movies of all time defies description. It was by far Hughes’ greatest commercial success.

I’m not sure exactly what messages child audiences are picking up through all of this. I doubt they would be healthy, but that is probably better left to a psychologist to parse. Still, this screen duality of cutesiness/darkness appears to have been experienced by Culkin himself in real life. 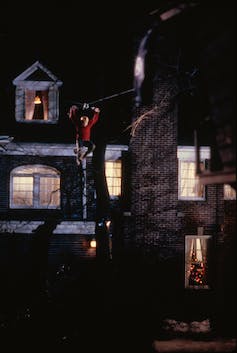 Don’t try this at home. Disney

Culkin’s parents carefully fostered the “America’s darling” persona throughout his young career. In his teens, Culkin became emancipated from them, taking control of his finances. (He later claimed his father had been psychologically and physically abusive). Career-wise, Culkin basically disappeared after 1994’s Richie Rich. The typical descent into drugs and alcohol followed. Now 40, he says he is substance free and has described himself as essentially “retired” from acting.

Disney has announced plans to reboot the Home Alone series. It may not be a bad move on their part. But could they ever find another child actor who epitomised “cute” as much as Culkin did?

Home Alone is in cinemas from December 3.