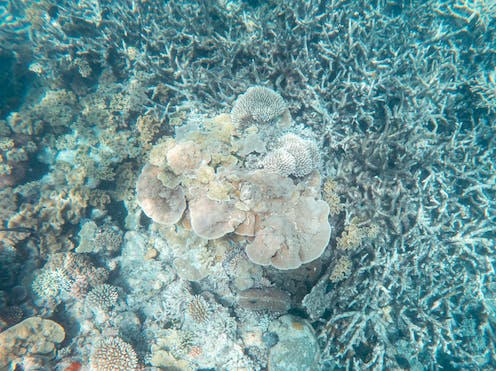 The Great Barrier Reef is now in “critical” condition and the health of four other Australian World Heritage properties has worsened, according to a sobering report just released by the International Union for Conservation of Nature (IUCN).

The IUCN is the global authority on nature. Its third outlook report marks the first...

The Great Barrier Reef is now in “critical” condition and the health of four other Australian World Heritage properties has worsened, according to a sobering report just released by the International Union for Conservation of Nature (IUCN).

The IUCN is the global authority on nature. Its third outlook report marks the first time the IUCN has declared an Australian property as critical, which means its values are severely threatened and deteriorating. The health of the Blue Mountains, Gondwana Rainforests, Shark Bay and the Ningaloo Coast has also been downgraded.

The assessment, while chastening, is not surprising. The Great Barrier Reef has endured three mass coral bleaching events in five years, and last summer’s bushfires caused untold damage in the Blue Mountains and Gondwana Rainforests (not to mention the current fires at the reef’s Fraser Island).

World Heritage: the best of the best

The latest report builds on previous reports from 2014 and 2017, and shows the status and trends of World Heritage properties identified for their outstanding natural values. As the report states:

our ability to conserve these sites is thus a litmus test for the broader success of conservation worldwide.

To qualify for World Heritage listing for natural values, a place must meet one or more of four criteria: exceptional beauty, geology, ecological processes, and species and habitats.

Some properties are also recognised for cultural values and, if they have both, they’re referred to as “mixed”. Across the world there are 252 natural and mixed World Heritage properties, of which 16 are in Australia.

The IUCN is the official advisor on nature to UNESCO’s World Heritage Committee. The IUCN Outlook report involves assessments by hundreds of international experts, who examine the conservation prospects of all natural and mixed World Heritage properties. It focuses on their natural values, the threats to these values and the effectiveness of actions to protect them. 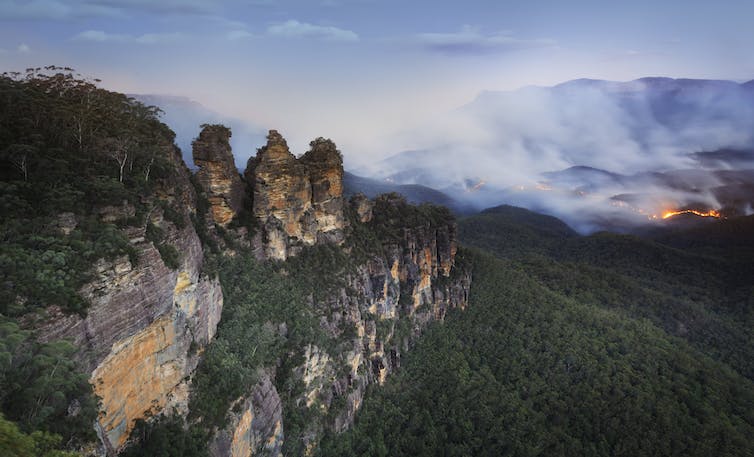 The status of the Blue Mountains has been downgraded from ‘good with some concerns’ to ‘significant concern’. Nabil Zainol Abidin, Author provided (No reuse)

Threats to our iconic places

Climate change is now the most prevalent threat to natural World Heritage sites, and to many cultural sites.

Overall, the report assessed climate change as a high or a very high threat in 83 out of 252 global properties (33%). This rate is double in Australia, with climate change listed as a threat to 69% (11 of 16) of Australian properties.

And when considering the four natural criteria individually, climate change is the greatest threat to each. This is likely to get worse in future, as climate change is expected to affect more than three times the number of properties impacted by any other threat.

For many properties, the deteriorated conservation outlook is the result of accumulated threats. Impacts of climate change, like coral bleaching and bushfires, are often exacerbated by other threats. For example, the federal government’s 2019 Outlook Report for the Great Barrier Reef listed 45 threats including climate change. This included poor water quality from land-based runoff, coastal development and fishing. 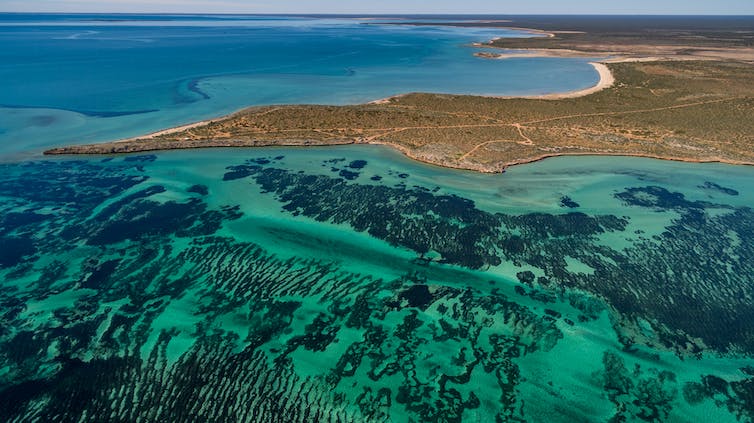 Seagrass meadows and headlands in the World Heritage-listed Shark Bay Conservation Area, now rated as ‘good with some concerns’. Shutterstock

At the time of writing, the website which provides the full rationale behind the IUCN outlook was not yet publicly available. However the threats facing the five downgraded Australian sites are well documented.

More frequent and intense bushfires are a problem for the Blue Mountains, Shark Bay, and Gondwana Rainforests. These ancient rainforests, along with Ningaloo and Shark Bay, also face threats of invasive species, diseases and storms.

Punching below our weight

While there have been some successes globally, the threats facing our heritage places are escalating.

Since the 2017 assessment, of the 252 properties analysed globally, 16 (6%) have deteriorated and only eight (3%) showed improvement. Notably, Australia is punching below its weight, with 31% of properties having deteriorated (5 of 16) and zero with improvement.

Read more: Prepare for hotter days, says the State of the Climate 2020 report for Australia

All of Australia’s World Heritage properties are recognised as having “highly effective” or “mostly effective” protection and management activities.

But the deterioration of the Great Barrier Reef, the Blue Mountains, Gondwana Rainforests, Shark Bay and Ningaloo Coast casts doubt on whether these actions are an effective response to threats, especially climate change. 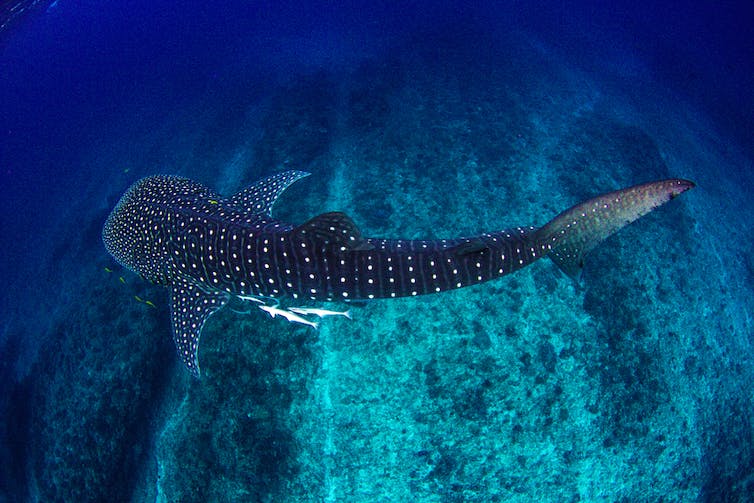 Western Australia’s Ningaloo Coast, now downgraded to ‘good with some concerns’, is famous for its vast diversity of wildlife, including whale sharks. Shutterstock

Australia’s climate response has been widely criticised, most recently by Christiana Figueres, the former chief of the UN Climate Framework. In a keynote to open the Australian Emissions Reductions Summit yesterday, Figueres said:

I have been pretty vocal about my frustration for so many years of the completely unstable, volatile, unpredictable stand and position on climate change in Australia.

“Meeting and beating” Australia’s 2030 emissions targets has been the Morrison government’s catch-cry. But the target lacks ambition and the government hasn’t ruled out using Kyoto carry-over credits to help meet it. The government has also refused to commit to a target of net-zero emissions by mid century, in contrast to the policies of many of our international peers.

Management of non-climate stressors is, and will remain, essential to halt the decline of the values of our properties. But Australia must adopt more ambitious climate goals to avoid losing those values that make our heritage places special, preserving them for future generations.

Read more: NSW has joined China, South Korea and Japan as climate leaders. Now it's time for the rest of Australia to follow