If you leave your car sitting the garage for too long, the battery can go flat. Similarly, if we don’t maintain our friendships, they can go a bit flat too.

So just as it’s good practice to drive your car every so often and have it serviced regularly, friendships are easier to maintain with some semblance of regular contact.

What has this meant for our friendships during 2020, a year of social distancing and lockdowns? My research suggests physical separation wasn’t necessarily associated with psychological separation or the breakdown of friendships.

And that appears to be thanks mostly to communication technologies.

Consistent with research from other parts of the world, lockdown experiences in Australia have been associated with diminished emotional well-being for many people.

My colleague Travis Cruickshank and I surveyed 1,599 Australians from various age groups during the national lockdown in April. Our study is still at the preprint stage, which means it hasn’t yet been published in a peer-reviewed journal.

We also asked how their friendships had been affected, and surprisingly, most respondents reported no change (66%). This was despite 72% noting they were interacting face-to-face with friends a lot less (and a further 14% somewhat less) during the pandemic.

Read more: It's hard to admit we're lonely, even to ourselves. Here are the signs and how to manage them

Communication technologies to the rescue

At first glance our results seem strange, as even the best communication technologies are arguably not an adequate substitute for face-to-face interaction. It’s difficult to make eye contact — an important social cue — through a screen. And if you’ve ever tried to catch up with a group of friends over Zoom or a similar platform, you’ll know it can become a little chaotic.

However, 56% of participants in our study reported spending more time interacting with friends using technology during the pandemic (for example, phone, email, or online chat). So it seems most people used communication technologies to stay connected with their friends during lockdown — even if it wasn’t quite the same as catching up in person. 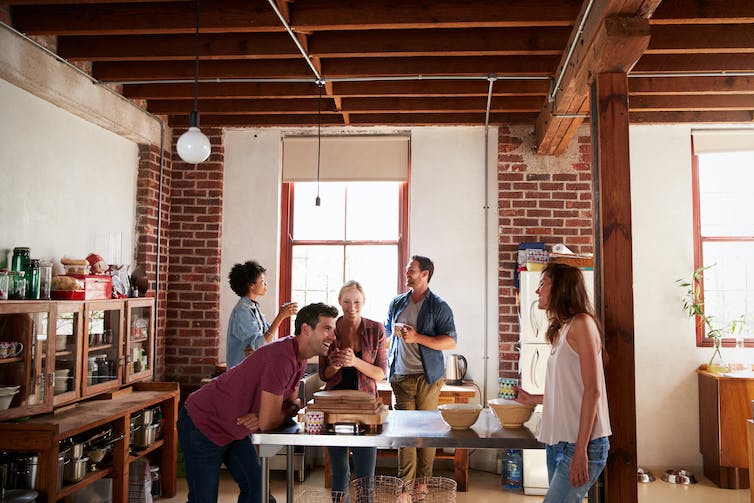 Social media sometimes gets a bad rap. For example, excessive social media use has been associated with negative outcomes such as lower self-esteem and narcissistic tendencies. It can also be a vehicle for spreading misinformation.

However, having a raft of options for communicating digitally, of which social media platforms are a big part, has arguably been a good thing overall.

People have been able to share jokes with a wide audience to keep spirits up. For example, a Facebook group encouraging people to dress up in costumes to take their bins out, and then post pictures, went viral around the world.

More importantly, people could stay connected with friends and family during a stressful time. We know social support is important for managing anxiety, especially during fraught times.

Our results are consistent with other Australian research and US research which found people didn’t perceive their social support to be negatively affected during the pandemic.

But not everybody made use of technology

In our study, while most people reported no impact on their friendships, 27% of people reported a deterioration in their relationships with friends. These people were more likely to also report not increasing their level of communication via technological means. 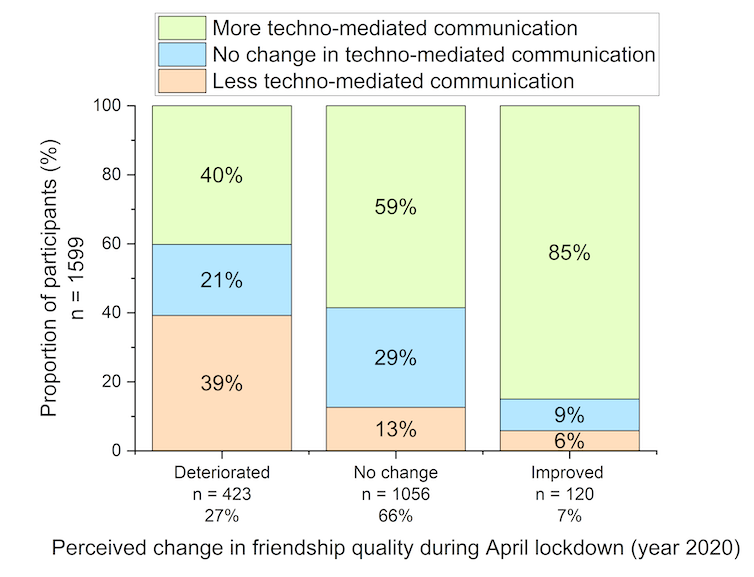 Author provided These people were also more likely to report their mental health had deteriorated. It’s important to note we collected our data fairly early in the pandemic. So it’s possible more people, particularly those in Victoria who endured a prolonged second lockdown, may have experienced deterioration in their friendships since we collected our data. But our results highlight the important role communication technologies can play during a pandemic, and the value of using such technologies to maintain relationships and social support, for the benefit of our mental health. 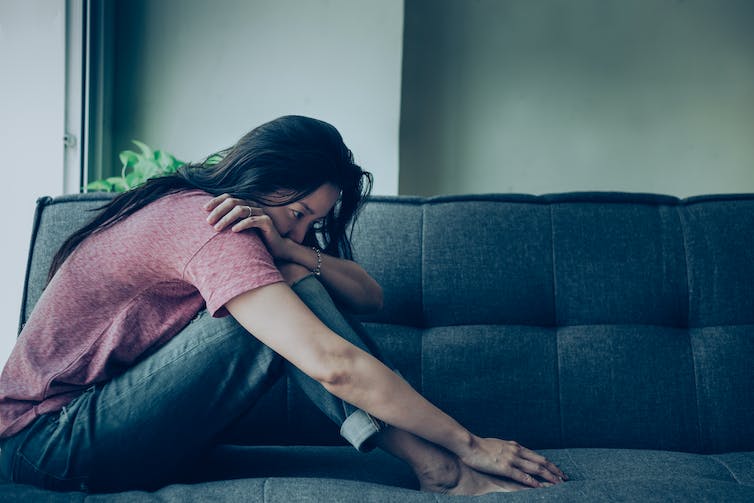 Some participants in our study reported their social relationships had deteriorated. Shutterstock Interestingly, 7% of people reported an improvement in friendship quality. Perhaps connecting over difficult times brought some people closer. Alternatively, with various communication technologies and apps gaining traction, some people may have started interacting with friends during lockdown who they wouldn’t normally see or speak to. New communication technologies on the horizon Video chat platforms (such as Zoom) saw a dramatic increase in use during the pandemic. While serviceable, video chat is still lacking compared with face-to-face interaction. The pandemic has heightened interest in the development of new digital communication technologies. One prospect is communication in virtual reality (VR). During the pandemic, a host of start-up companies have appeared selling VR meeting platforms. There was also an increase in usage of social VR programs, although these remain on the fringe. A current issue with social interaction in VR is that the avatars generally have minimal expression and therefore only represent a shell of a character that transmits your voice. As summed up in this article on The Conversation, “VR technologies perhaps only offer a pale imitation of the multi-sensory experiences of life”. However, new developments in motion tracking technology and touch-stimulating devices are set to significantly improve the social interaction experience in VR within the next few years. New VR headsets are in development that include inbuilt facial motion tracking, such as those by Facebook, and also the DecaGear 1. In the coming years, we may be interacting in VR at work and at the weekend with our friends. Read more: Why FaceTime can’t replace face-to-face time during social distancing