The French Review didn’t confirm a “free speech crisis” in Australian universities. But nor did its report last year confirm free speech was “alive and well”, as Universities Australia would have it. In many university policies the report found vague language, which could rule out voicing a view deemed offensive.

Most universities have updated their policies in response to the French Review’s Model Code on Freedom of Speech and Academic Freedom, and related amendments to higher education legislation are before the parliament. On Wednesday, the Walker Review of universities’ implementation of the code reported that many don’t fully reflect the code yet.

Read more: University free speech bill a sop to Pauline Hanson and other critics, but what difference will it make? 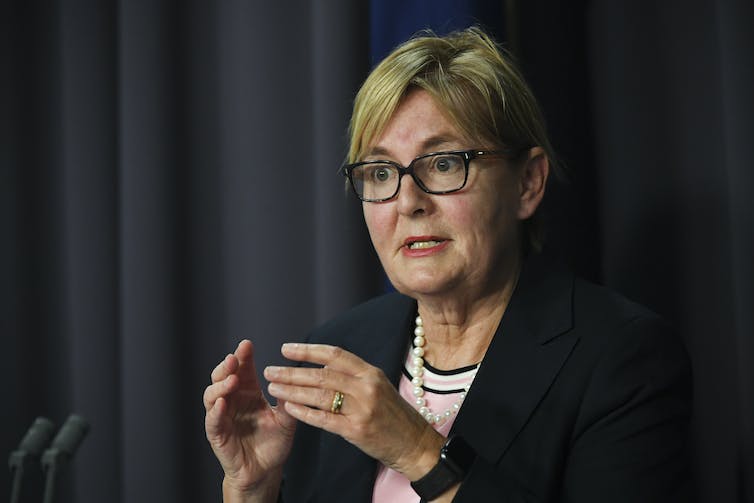 Former vice-chancellor Sally Walker has found policies are fully aligned with the French model code at nine universities, mostly aligned at 14, partly aligned at four and not aligned at six, with the rest still finalising their policies. Lukas Coch/AAP

However they fare on this, many will also recall the French Review’s observation:

A culture powerfully predisposed to the exercise of freedom of speech and academic freedom is ultimately a more effective protection than the most tightly drawn rule. A culture not so predisposed will undermine the most emphatic statement of principles.

Of course, universities promote respect for others’ rights, and civility more generally. They have a duty to foster the well-being of students and staff. But in the model code this doesn’t “extend to a duty to protect any person from feeling offended or shocked or insulted by the lawful speech of another”.

Like the Chicago Principles, the model code reflects legal limits on free expression, but doesn’t seek to enforce civility as a formal campus rule. It recognises universities as institutions where disagreement runs deep and where diverse views — even those some find offensive — should be exchanged freely and challenged openly.

So, apart from clarifying policy, how can universities promote a “free to disagree” culture on campus? Not just in name, but in norms?

Learning how to disagree well

One way may be to focus more on teaching students how to argue persuasively. On topics where positions are polarised, ad hominem attacks are common. On the topic of climate change, for example, debates often slide into shouting matches between “deniers” and “zealots”. Or they may proceed mainly in the form of petty point-scoring, as in the recent US presidential debates.

Read more: The first US presidential debate was pure chaos. Here's what our experts thought

To keep debates robust and constructive, it helps to recognise other diversionary tactics and defensive routines. My “Disagree Well On Campus” model (shown below — click to enlarge) calls on scholars to aim high. 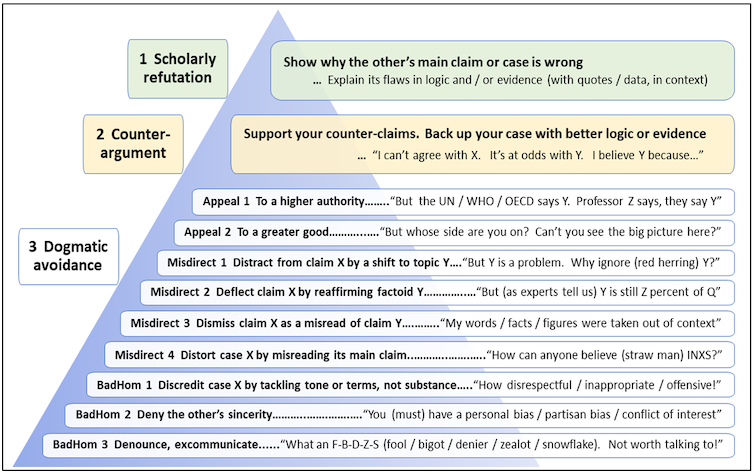 This means they should contest an opponent’s claims with logic and evidence, a level 2 counter argument. If they can do this well enough, the case at hand — whether mainstream or minority — may be refuted (or reframed, or reaffirmed) to a scholarly standard, level 1.

But, as the list of level 3 “dogmatic avoidance” tactics suggests, there are many ways to differ without resolving anything. At the low end, personal accusations and name-calling aren’t arguments in a level 2 sense. Often they signal a refusal to debate the substance of this kind of topic with that kind of person.

Consider how your last big argument went. Was it level 1, 2 or 3?

At level 3, the first two “appeal” tactics enlist support for a view by appealing to a higher authority or greater good. (But how far do we rely on one, or prioritise the other?)

The next four “misdirection” tactics evade the point of an opponent’s view. This is done mainly by raising other concerns. (But how relevant and significant are these to the main argument?)

The final three “exclusion” tactics withdraw the commitment to engage with an opponent’s viewpoint, or take it seriously, by casting doubt on their morality, sincerity or credibility.

At level 3, common avoidance tactics include “straw man” arguments (Misdirect 4). An opponent’s view is restated in a way that gives it unintended meanings. This caricature is then refuted, instead of the actual claim.

Another tactic is to cite a technical fact as a trump card, which seems to settle which side is right (Misdirect 2). But this may be a “red herring” that leads away from the point at issue (Misdirect 1). Or it may be an unreliable form of evidence. The phrase “lies, damned lies and statistics” refers to the use of carefully selected factoids to prop up or put down a case. Often this amounts to spin by omission, not the level of proof that independent experts would accept.

Another level 3 tactic is to take offence at the tone or terms of an opposing view, without addressing its substance (BadHom 1). This is more civil than calling someone an FBDZS — a fool, bigot, denier, zealot or snowflake (BadHom 3). But by shifting off-topic to invoke rules of civility, it offers scope to censor or end the exchange without conceding any substantive point. 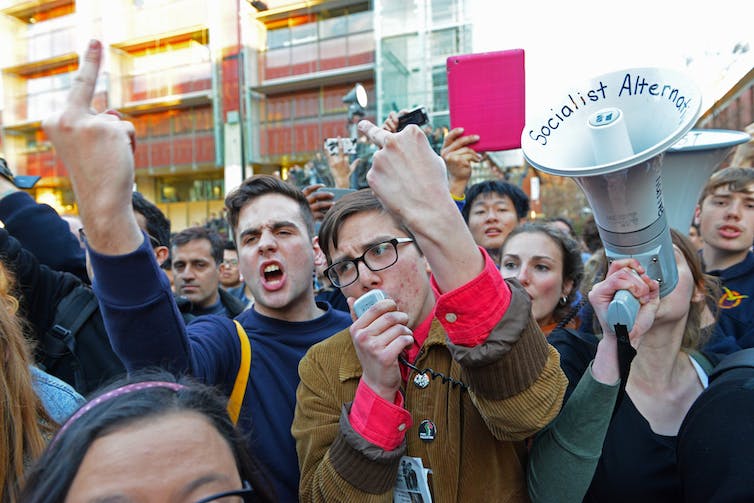 Attempts have been made to disrupt speeches on some Australian university campuses. Brenton Edwards/AAP

Read more: There are differences between free speech, hate speech and academic freedom – and they matter

‘Heretic protection’ on campus – but with rigour

Many debates mix level 2 and level 3 ways of arguing. Some are “won on the day” with level 3 tactics alone. But rhetorical point-scoring doesn’t amount to scholarly refutation.

Once a majority view seems settled on this basis, any dissenting minority view — even one with valid points to make — may become undiscussable. In a university context, this is where the principle of academic freedom does its work. As one scholar observes: “popular or mainstream ideas generally need no protection”.

As places of higher learning, universities assume responsibility for protecting free expression and open exchange when views diverge, while also promoting the practice of scholarly refutation. This stance affords “heretic protection” to minority views, while also exposing them to robust counter-argument.

As future leaders and experts, university graduates will need to reach and justify decisions that have wide real-world consequences. Often these decisions will be made in the face of firm opposition from many of those affected. Being able to argue clearly and persuasively, and to tell the difference between a well-reasoned case and slippery rhetoric, will be critical professional skills.