There are many things humanity must overcome before any return journey to Mars is launched.

The two major players are NASA and SpaceX, which work together intimately on missions to the International Space Station but have competing ideas of what a crewed Mars mission would look like.

The biggest challenge (or constraint) is the mass of the payload (spacecraft, people, fuel, supplies etc) needed to make the journey.

We still talk about launching something into space being like launching its weight in gold.

The payload mass is usually just a small percentage of the total mass of the launch vehicle.

For example, the Saturn V rocket that launched Apollo 11 to the Moon weighed 3,000 tonnes.

Mass constrains the size of a Mars spacecraft and what it can do in space. Every manoeuvre costs fuel to fire rocket motors, and this fuel must currently be carried into space on the spacecraft.

SpaceX’s plan is for its crewed Starship vehicle to be refuelled in space by a separately launched fuel tanker. That means much more fuel can be carried into orbit than could be carried on a single launch. 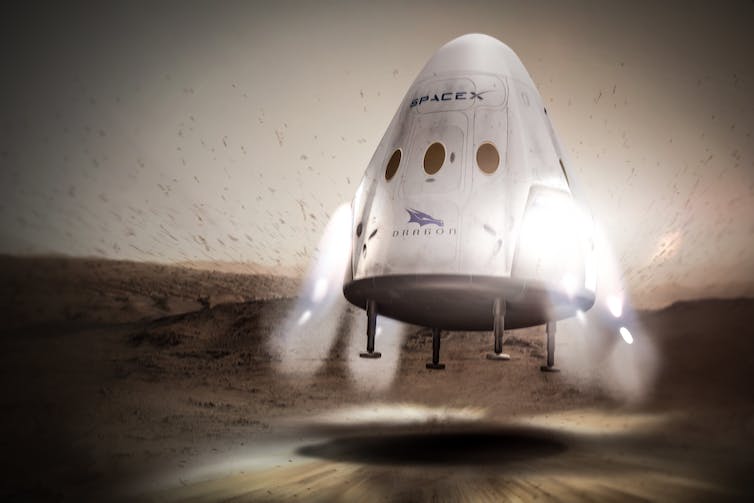 Another challenge, intimately connected with fuel, is time.

Missions that send spacecraft with no crew to the outer planets often travel complex trajectories around the Sun. They use what are called gravity assist manoeuvres to effectively slingshot around different planets to gain enough momentum to reach their target.

This saves a lot of fuel, but can result in missions that take years to reach their destinations. Clearly this is something humans would not want to do.

Both Earth and Mars have (almost) circular orbits and a manoeuvre known as the Hohmann transfer is the most fuel-efficient way to travel between two planets. Basically, without going into too much detail, this is where a spacecraft does a single burn into an elliptical transfer orbit from one planet to the other.

A Hohmann transfer between Earth and Mars takes around 259 days (between eight and nine months) and is only possible approximately every two years due to the different orbits around the Sun of Earth and Mars.

A spacecraft could reach Mars in a shorter time (SpaceX is claiming six months) but — you guessed it — it would cost more fuel to do it that way. 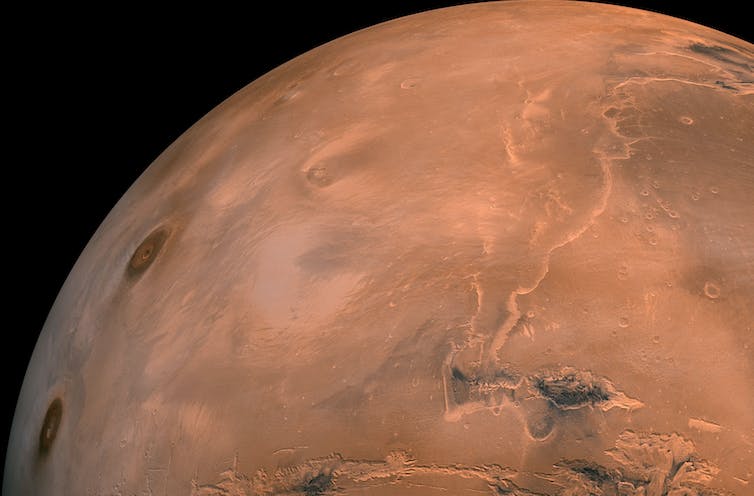 Suppose our spacecraft and crew get to Mars. The next challenge is landing.

A spacecraft entering Earth is able to use the drag generated by interaction with the atmosphere to slow down. This allows the craft to land safely on the Earth’s surface (provided it can survive the related heating).

But the atmosphere on Mars is about 100 times thinner than Earth’s. That means less potential for drag, so it isn’t possible to land safely without some kind of aid.

Some missions have landed on airbags (such as NASA’s Pathfider mission) while others have used thrusters (NASA’s Phoenix mission). The latter, once again, requires more fuel.

A thruster landing on Mars.

A Martian day lasts 24 hours and 37 minutes but the similarities with Earth stop there.

The thin atmosphere on Mars means it can’t retain heat as well as Earth does, so life on Mars is characterised by large extremes in temperature during the day/night cycle.

So we need to be very selective about where we choose to live on Mars and how we manage temperature during the night.

The gravity on Mars is 38% of Earth’s (so you’d feel lighter) but the air is principally carbon dioxide (CO₂) with several percent of nitrogen, so it’s completely unbreathable. We would need to build a climate-controlled place just to live there.

SpaceX plans to launch several cargo flights including critical infrastructure such as greenhouses, solar panels and — you guessed it — a fuel-production facility for return missions to Earth.

Life on Mars would be possible and several simulation trials have already been done on Earth to see how people would cope with such an existence.

The final challenge is the return journey and getting people safely back to Earth.

Apollo 11 entered Earth’s atmosphere at about 40,000km/h, which is just below the velocity required to escape Earth’s orbit.

Spacecraft returning from Mars will have re-entry velocities from 47,000km/h to 54,000km/h, depending on the orbit they use to arrive at Earth.

They could slow down into low orbit around Earth to around 28,800km/h before entering our atmosphere but — you guessed it — they’d need extra fuel to do that.

If they just barrel into the atmosphere, it will do all of the deceleration for them. We just need to make sure we don’t kill the astronauts with G-forces or burn them up due to excess heating.

These are just some of the challenges facing a Mars mission and all of the technological building blocks to achieve this are there. We just need to spend the time and the money and bring it all together. 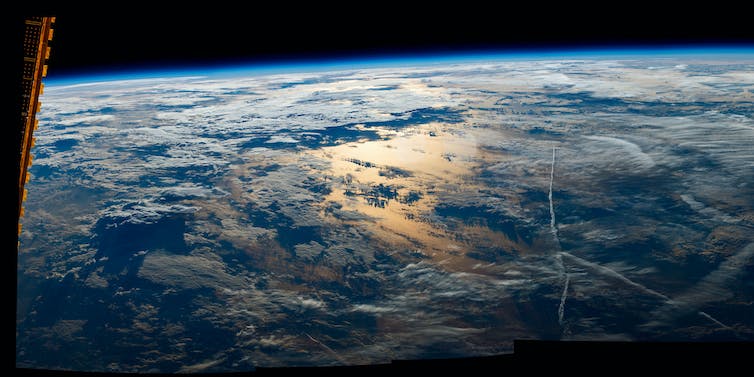 And we need to return people safely back to Earth, mission accomplished. NASA