Inevitably, most lists will be biased to the more conspicuous mammals and birds, hold fewer reptiles and frogs, and likely lack invertebrates — animals without a backbone or bony skeleton — altogether.

I’m an invertophile, fascinated by our rich terrestrial invertebrate fauna, so my list will be different. I’m enchanted by stunning dragon springtails, by cryptic little Tasmanitachoides beetles, and by the poorly known allothyrid mites, among thousands of others.

To preserve our biodiversity, we first must ask: “which species live where?”. For our invertebrates, we are a long way from knowing even this.

Last year, a team of scientists estimated that the Australian 2019-2020 bushfires killed, injured or displaced three billion animals. That was a lot. But it was also a woefully inadequate estimate, because it only accounted for mammals, reptiles, birds and frogs.

Hidden from view, many trillions more invertebrates burned or were displaced by the fires. And yes, invertebrates are animals too. 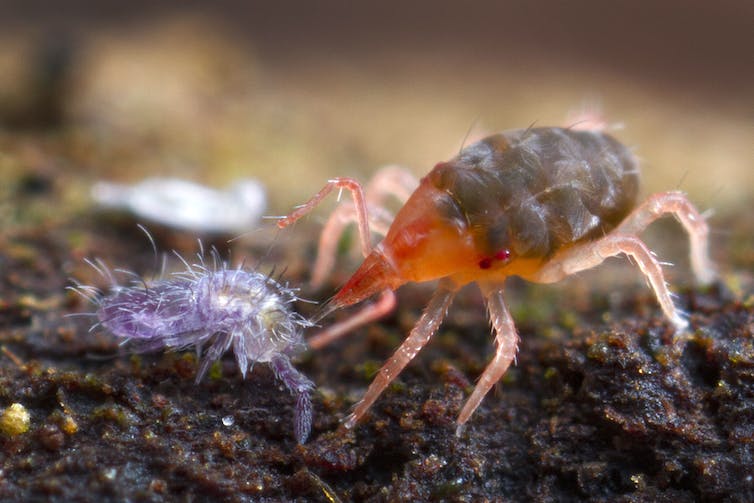 A mite from the family Bdellidae (on the right) has captured a springtail, and is using its piercing mouthparts to suck it dry. Mites and springtails are among the most abundant animals on the planet. Nick Porch, Author provided

Admittedly, it’s hard to come to terms with invertebrates because they’re often hard to find and difficult to identify. Most species are inconspicuous, even if they belong to incredibly abundant groups, such as mites and springtails, which can occur in numbers exceeding 10,000 per square metre.

Most invertebrates are poorly known because there are so many species and so few people working on them. In fact, it’s likely only a quarter to one-third of Australia’s terrestrial invertebrate fauna is formally described (have a recognised scientific name). 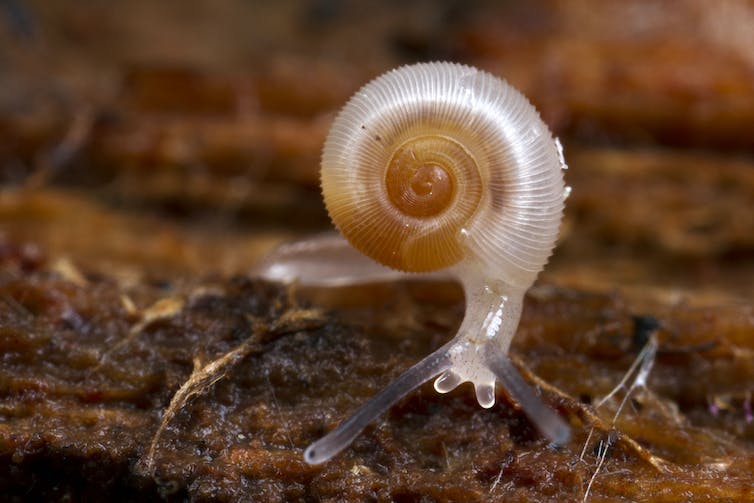 Meredithina dandenongensis, a species from the wet forests of Victoria. It can be found during the day under rotting logs. The land snail family Charopidae contains hundreds of species across wetter parts of southern and eastern Australia. Nick Porch, Author provided

One of the problems invertebrates have, in terms of attracting attention, is that many are not easily seen with the naked eye.

Macrophotography can magnify these wonders for a view into a world most of us are completely unfamiliar with. Even then, it often will be hard to know what we see. Everyone will recognise a kangaroo, but who can identify an allothyrid mite? 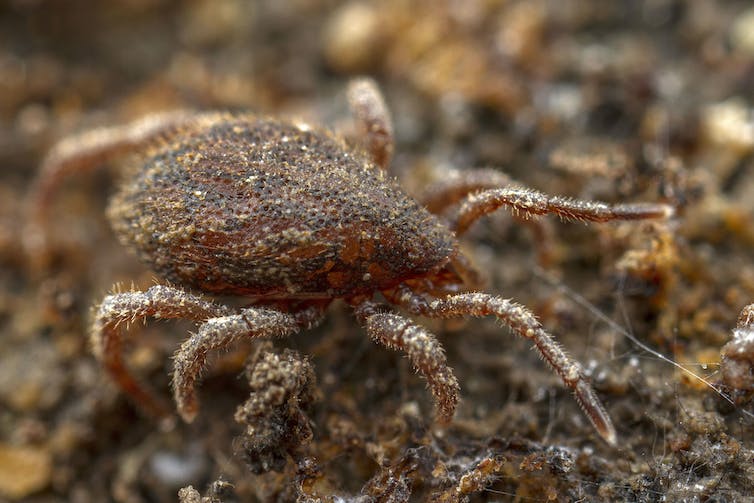 An undescribed Allothyridae species. Just one of the many species in this group waiting to be studied. Nick Porch, Author provided

This collage shows a selection of mites found in the forests of southeastern Australia. It’s likely many of the species shown here are unknown to science. 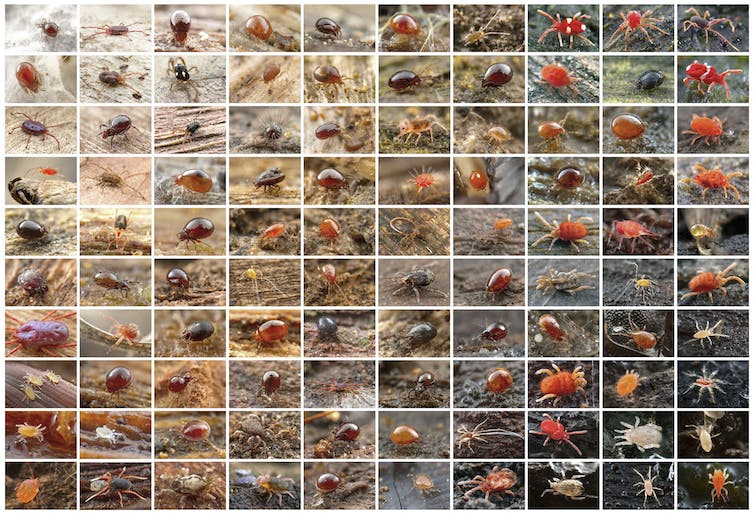 Mites are a very ancient and diverse group. They can be found abundantly in most terrestrial habitats but are rarely seen because most are several millimetres long or smaller. Nick Porch, Author provided

Animal ecologists, most of whom work on vertebrates, often joke that I “study the ‘food’, haha…”. They think they’re funny, but this reflects a deep seated bias — one extending from scientists to the wider public. This limits the development of a comprehensive understanding of biodiversity that has flow-on effects for conservation more broadly.

It’s true: invertebrates are food for larger animals. But their vital role in maintaining Australia’s ecosystems doesn’t end there.

Every species has an evolutionary history, a particular habitat, a set of behaviours reflecting that history, and a role to play in the ecosystem. And many terrestrial invertebrates belong to especially ancient lineages that record the deep history of Australia’s past.

Their history is reflected in the breakup of the ancient supercontinent, Gondwana. In fact, Australian species of moss bugs are more closely related to South American species than to those from nearby New Zealand. 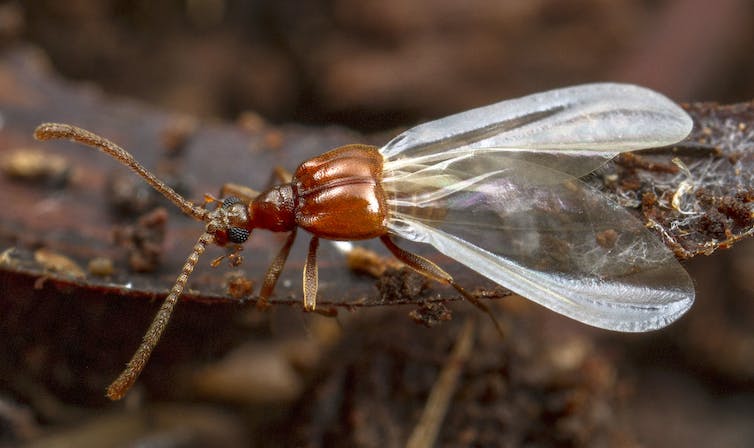 This is a common pattern in terrestrial invertebrate groups. It reflects how the New Zealand plate separated from the remainder of Gondwana about 80 million years ago, while the Australian plate remained connected to South America via Antarctica.

Similar stories can be told from across the invertebrate spectrum. The photo below shows a few examples of these relics from Gondwana. 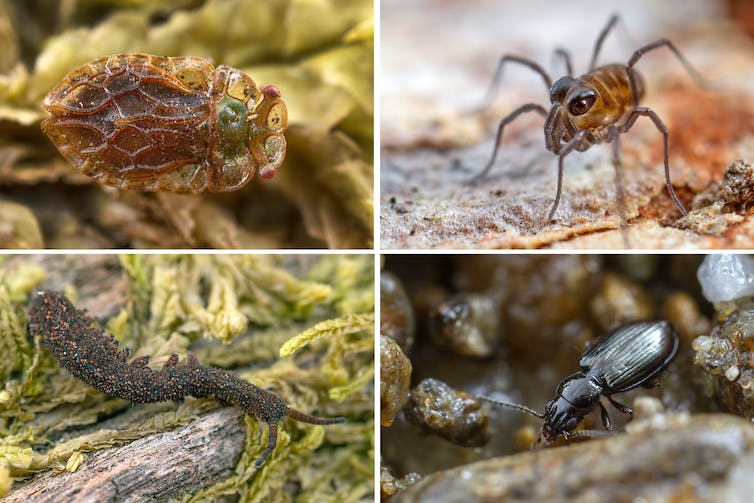 Overprinting this deep history are the changes that occurred in Australia, especially the drying of the continent since the middle Miocene, about 12-16 million years ago.

This continent-wide drying fragmented wet forests that covered much of the continent, resulting in the restriction of many invertebrate groups to pockets of wetter habitat, especially along the Great Dividing Range and in southwestern Australia.

A consequence of this was the evolution in isolation of many “short-range endemic” species. 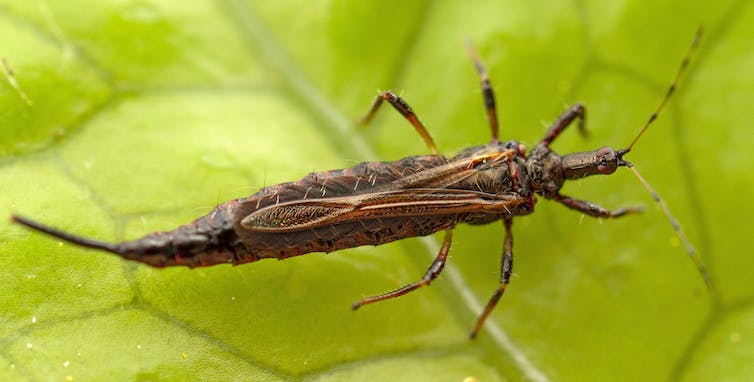 This is Idolothrips spectrum, the largest thrips in the world. It’s called the giant thrips, even though it’s less than 10mm long. Dandenong Ranges, Victoria. Nick Porch, Author provided

But short-range endemism is much more common in invertebrates than other organisms. This is because many invertebrates are poor dispersers: they don’t move between habitat patches easily. They may also maintain viable populations in small areas of suitable habitat, and are frequently adapted to very specific habitats.

Take Tropidotrechus, pictured below, a genus of beetles mostly restricted to the same region as Leadbeater’s possum. They, however, divide the landscape at a much finer scale because they’re restricted to deep leaf litter in cool, wet, forest gullies.

As Australia dried, populations of Tropidotrechus became isolated in small patches of upland habitat, evolving into at least seven species across the ranges to the east of Melbourne.

The trouble with knowing so little about Australia’s extraordinary number of tiny, often locally unique invertebrates, is that we then massively underestimate how many of them are under threat, or have been badly hit by events like the 2019-2020 fires.

If we wish to conserve biodiversity widely, rather than only the larger charismatic wildlife, then enhancing our knowledge of our short-range species should be a high priority. 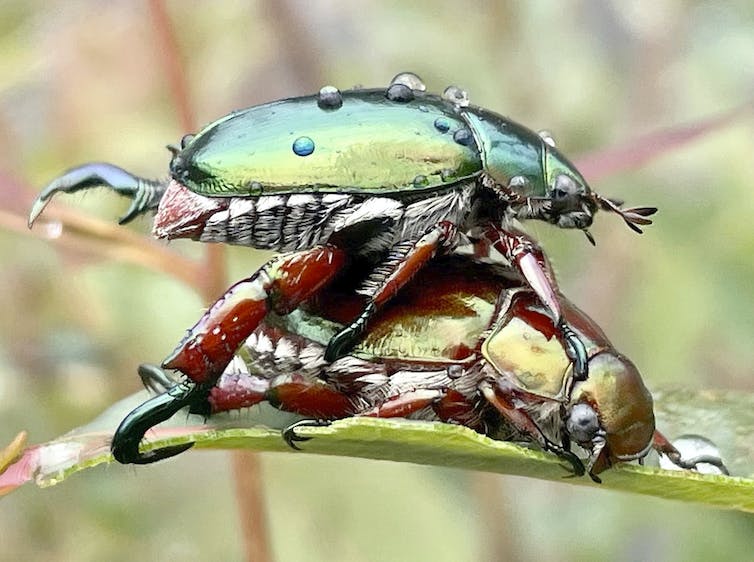 You don’t necessarily need specialist equipment to take pictures of our fascinating invertebrates. This is a phone picture of mating Repsimus scarab beetles (relatives to the Christmas beetles). It was taken at Bemboka in NSW, which burnt during the 2019-2020 fires. Nick Porch, Author provided

We’ve only just scratched the surface of Australia’s wonderful invertebrate fauna, so there are enough discoveries for everyone.

You can join iNaturalist, a citizen science initiative that lets you upload images and identify your discoveries. Perhaps you’ll discover something new — and a scientist just might name it after you.