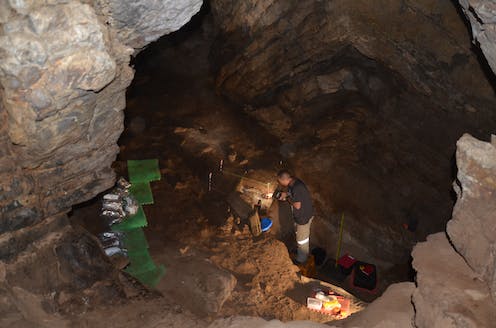 The main chamber of Cloggs Cave. Monash University archaeologist Joe Crouch is standing in the 1970s excavation pit, digging a new area in the wall of the old excavation.Bruno David, Author provided

New collaborative work at an Aboriginal cave in eastern Victoria, published today, shows the stark difference between contemporary archaeological research and that conducted in the 1970s.

In 1971, Cloggs Cave was rediscovered near the town of Buchan in East Gippsland, Victoria. By the end of 1972, archaeological excavations had been completed in the cave and adjacent rock shelter. The findings — extinct giant kangaroo remains (megafauna), Aboriginal stone tools dating back to the last Ice Age and buried fireplaces — made national news at the time.

Cloggs Cave belongs to the Krauatungalung clan of the GunaiKurnai nation. However in the 1970s, neither state and federal agencies, nor most of Australian society, acknowledged Traditional Owners’ rights to authorise and oversee research into their cultural places. 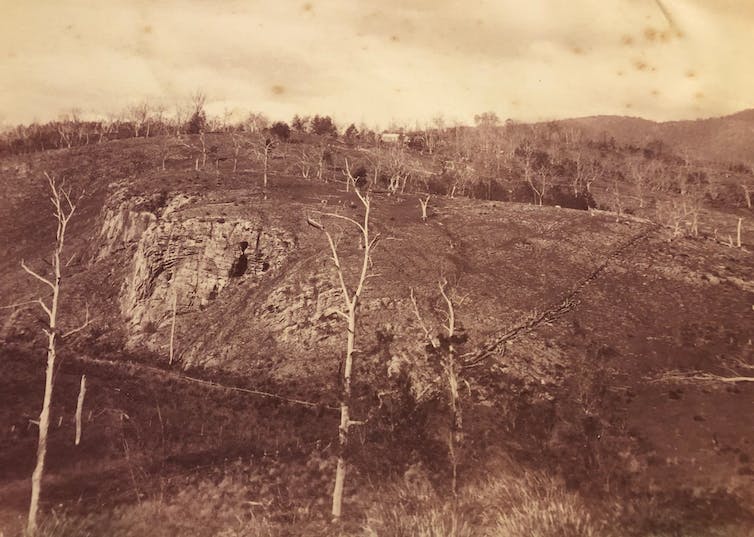 The outside of Cloggs Cave (vertical fissure in the middle of the cliff) pictured circa 1890-1900. Photo courtesy of the State Library of Victoria. Photographer unknown.

Of habitats and diets

Five decades ago, archaeological research and radiocarbon dating were in their infancy. Researchers were racing to find the oldest Aboriginal sites across Australia. Non-Indigenous archaeologists determined what research questions to ask and controlled how the research was conducted and interpreted. Findings often focused on how Aboriginal people had responded to their environments and what they ate.

The first stories written about Cloggs Cave in the mid-1970s described it as an Ice Age refuge from which local plant and animal resources were exploited.

According to these early interpretations, people had left the cave to inhabit the rock shelter outside as the climate warmed, around 10,000 years ago.

The GunaiKurnai Land and Waters Aboriginal Corporation revisited Cloggs Cave in the years leading up to 2019. It found sediments were eroding from the walls of the largest 1970s excavation pit. Although the pit had been shored up, the extra support was removed in the 1990s.

Researchers from Monash University, the Université Savoie Mont Blanc (France) and the Australian Research Council Centre of Excellence for Australian Biodiversity and Heritage were invited to be project partners.

In 2019, the cave was mapped in detail using a 3D Light Detection and Ranging scanner and a drone. New excavations of sections of the floor were conducted, and the chronology of people and megafauna in the cave was investigated using radiocarbon and optically stimulated luminescence dating techniques. 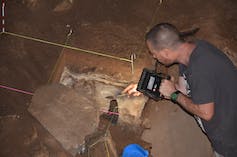 The investigations yielded fascinating insights about how the Old People inhabited the cave thousands of years ago. In a small alcove at the back lay a stone arrangement, including a layer of crushed minerals. Most of the stalactites on the ceiling had been intentionally broken. Uranium-series dating of parts of the regrown stalactites revealed these mineral deposits were first broken by Aboriginal people more than 23,000 years ago.

Towards the cave’s entrance, the new excavations uncovered a buried standing stone surrounded by fires lit 2,000–1,600 years ago and hundreds of thousands of animal bones. The animals’ deaths were natural — so Aboriginal people had not come to the cave to eat or cook food. 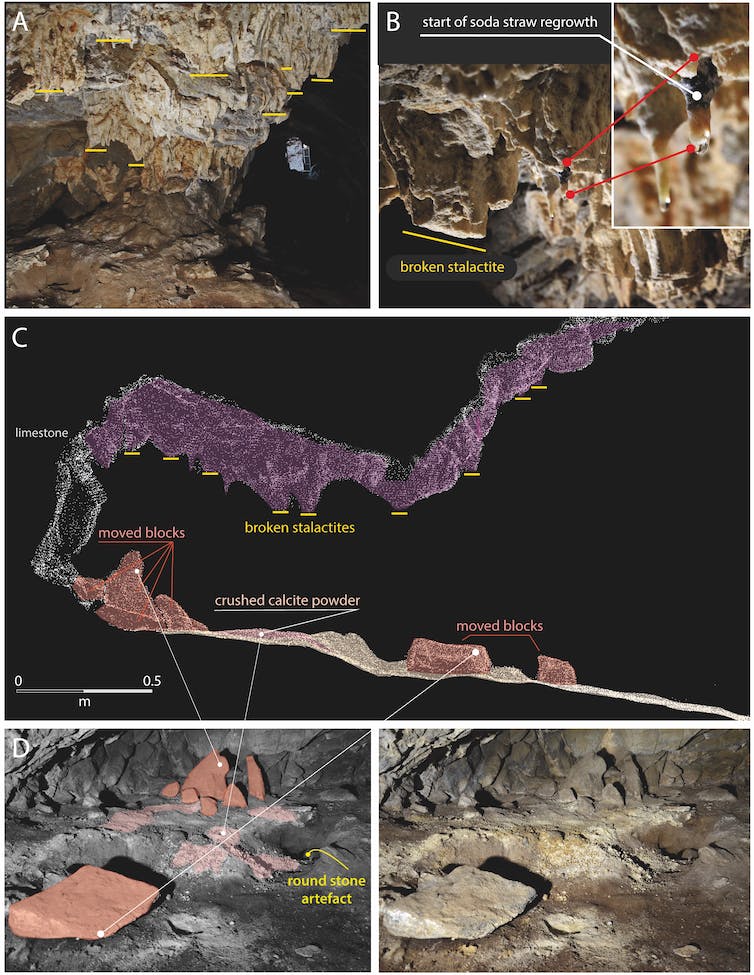 The stone arrangement, broken stalactites and ground-up powder on the floor of the alcove near the back of the cave. 23,000 years ago, small stalactites started growing from the stumps of the broken stalactites. 3D modelling by Johan Berthet; photos and artwork by Jean-Jacques Delannoy.

Since the 1970s, Australian society has changed with an increased recognition of Aboriginal cultures, knowledges, and land rights. It is now possible for the Traditional Owners to finally have a say in the story of Cloggs Cave, and in GunaiKurnai history.

The contrast in the stories from the two archaeological projects, 50 years apart, could not be starker. 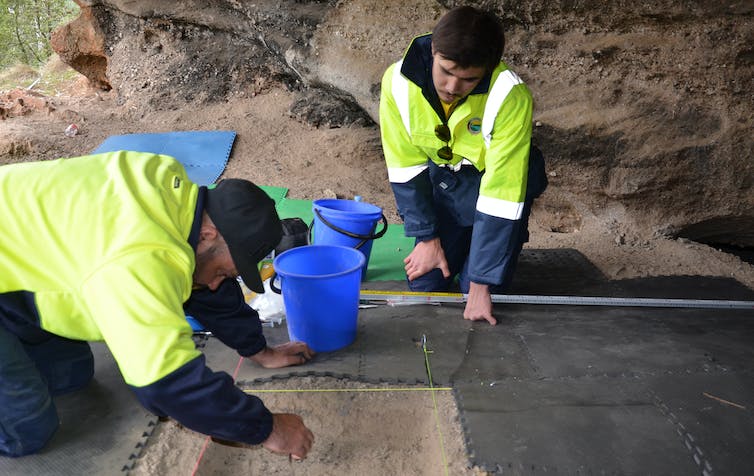 According to GunaiKurnai Traditional Owners — and Aboriginal perspectives recorded in the mid-19th century — caves are spiritually important. In 1875, Aboriginal men Turnmile and Bunjil Bottle showed Alfred W. Howitt the “Den of Nargun” in Gippsland. Howitt wrote that this rock shelter was home to “a mysterious creature which they believe haunts these mountains where they were living in caves and holes”.

Caves were also frequented by magical practitioners called mulla-mullung. They trained and practised their magic, using crystals and other stones, and ground powders such as ash.

This information was not considered by archaeologists in the 1970s as it did not fit their (mainly secular) interpretations in terms of habitat and diet. What was missing was a deep understanding that the rich social, cultural, and ritual lives of Aboriginal people could fundamentally shape the archaeological record. They did not simply respond to their environments.

A new picture of Cloggs Cave now emerges. The cave was not just a refuge from a cold environment, but a theatre of culturally rich, social and magical activities dating back millenia. It was avoided by people for day-to-day living, and probably used by GunaiKurnai mulla-mullung. 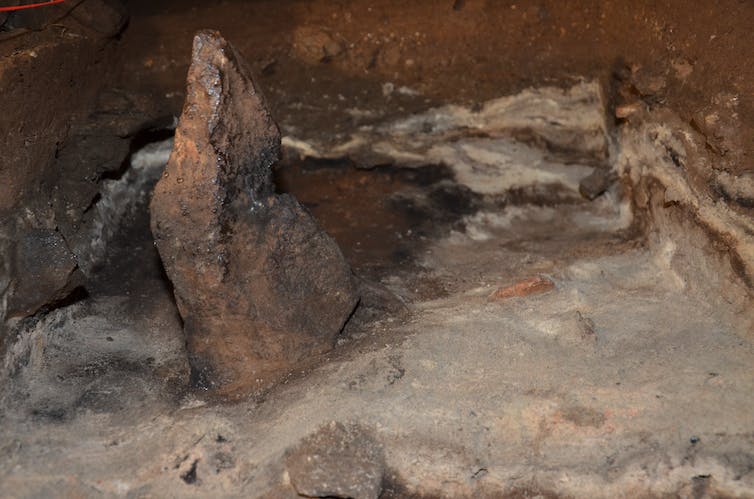 The 2,000-year-old standing stone, pictured during the 2019 Cloggs Cave excavations. Layers of ash — the remains of many fires — can be seen at the foot of the stone and in the wall of the excavation. Bruno David.

What was located during the 2019 research had been there all along, but was not noticed by previous researchers.

This is partly because new techniques give us a better window into the past activities of Aboriginal people at the cave. These new ways of seeing are matched with new ways of listening and researching — transforming how we tell archaeological histories.

The authors are just five of the 19 authors of the journal article. We thank the GunaiKurnai Land and Waters Aboriginal Corporation, Joanna Fresløv, Martin and Vicky Hanman of Buchan, and the nine Australian and international universities who collaborated on this project.